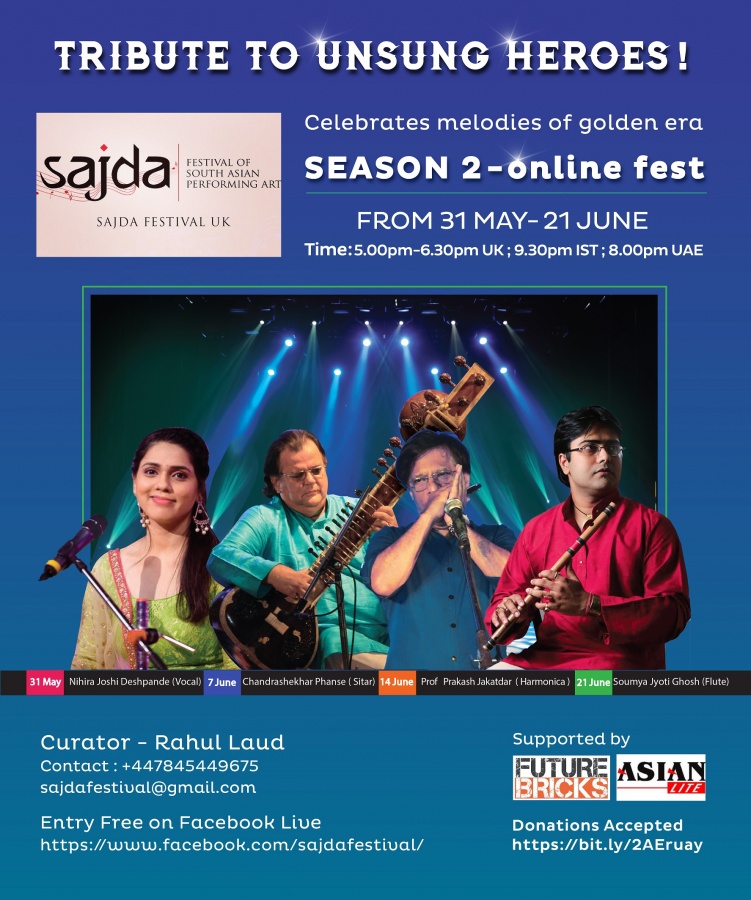 Beginning 31st May every Sunday 5.00 pm BST, Sajda Online festival will pay tribute to melodies of the golden era of Hindi film music

After receiving huge support and acclaim in UK and Mumbai city last year 2019, SAJDA FESTIVAL UK  has decided to go online with its Season2  this year. The theme will be TRIBUTE TO UNSUNG HEROES and the creative platform will host a Celebration of Hindi Film melodies of the golden era. Songs of the yesteryears ( From 60sto late 80s) of famous music directors RD Burman, Laxmikant Pyarelal, Khyaam, OP Nayyar among others will be presented by different artistes as tribute to that era.

The Online Festival will be held every Sunday at 5.00 pm BST till June 21. It will have four eminent internationally reputed artistes that include instrumentalists and a vocalist. Opening the festival on Sunday on 31 May at 5.00 pm BST, SAJDA  at its inaugural show will host the famous Bollywood playback singer and extremely popular and talented vocalist Nihira Joshi Deshpande an accomplished vocalist and singer in Indian music. SAREGAMAPA 2005 Top 5. Playback for eminent composers Shankar Ehsaan Loy for films like Salaam E Ishq, Bunty Aur Bubli, and Kill Dil. She is acclaimed for her  Independent music with her own YouTube channel, where she releases her singles and covers. Her recent single NIRMOHIYA won her international acclaim and nominated at Independent Music Awards.

The Consul General of India, Dr Aman Puri from the Consulate General of India office, Birmingham, UK has kindly consented to inaugurate the festival on 31 May that will be hosted by renowned Corporate Coach, Mentor and artiste par excellence Ani Kaprekar. 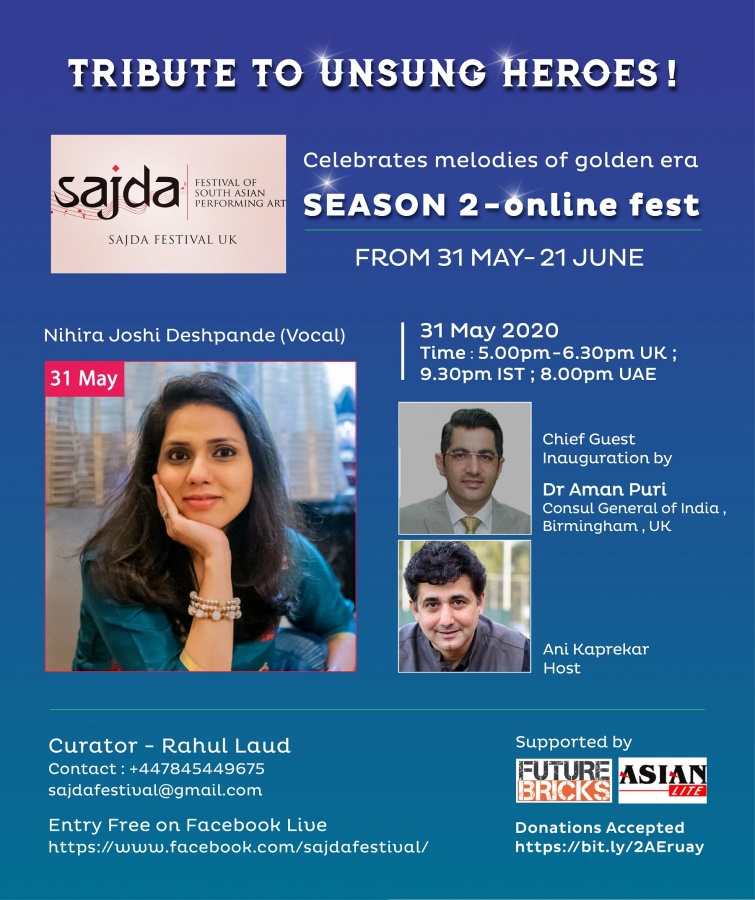 Using the Zoom tool the festival will be streamed on Facebook live on the SAJDA FESTIVAL UK page to reach a wide global audience. It’s reported that, the artistes, volunteers of SAJDA will start a WATCH PARTY to engage their family friends as the show will be watched in UK and in addition from India, UAE, the USA  where SAJDA fans and followers live.

‘’SAJDA draws lot of interest and having a reputation among connoisseurs, discerning audiences and the popular folk the online festival being offered free to them will engage them on Sundays from the comfort of their homes,’’ said Rahul Laud, Curator of the festival. Laud further added that the Online Festival reiterates SAJDA’s philosophy to entertain, educate and pay tribute to different performing arts and genres and artistes. As part of its social commitment, SAJDA will contribute a portion of the funds raised for the festival to different charities and cause.

The festival is generating an overwhelming response and Future Bricks UK’s popular financial services brand, Sri Sri Tatva UK (for Ayurvedic Products) and Academy of Science and Technology Management have come on board to support the festival.