President Donald Trump has urged Americans to stop stockpiling groceries as a reaction to the COVID-19 pandemic and asked people to “relax” and “take it easy”, even as locals across the country continue to report empty shelves in leading supermarkets and wholesale stores.

Trump on Sunday struck an upbeat tone on the same day when America’s top infectious diseases expert Dr. Anthony Fauci said the worst effects of the COVID-19 were “still to come”.

“You don’t have to buy so much. Take it easy. Just relax. It will all pass,” Trump said.

“Can you buy a little bit less, please?”

Meanwhile, the UK government from Monday will hold daily televised press conferences to update the public on the country’s fight against the coronavirus pandemic, Downing Street has said.

From Monday, Prime Minister Boris Johnson or a senior Minister will address the media to ensure people are informed about how to protect themselves, the BBC reported .

The media briefing will follow another meeting of the government’s emergency Cobra committee, chaired by Johnson, where further decisions could be made on actions to tackle the spread of coronavirus.

The announcement of the daily updates comes after Health Secretary Matt Hancock revealed that every Briton over the age of 70 will be asked “within the coming weeks” to stay at home for an extended period to protect themselves. The number of confirmed UK cases of the virus has reached 1,372, with 40,279 people tested, according to the latest Department of Health figures. Almost all of the latest cases were in England, but 34 new cases were announced in Wales, 32 in Scotland and 11 in Northern Ireland. There are a total of 35 deaths in the country.

Trump spoke at the White House even as Americans continue to be stunned by the sudden shortage of canned food, bread, pasta, meat and other essential edibles in their neighbourhood markets.

“There’s no shortages. We have no shortages other than people are buying anywhere from three to five times what they would normally buy,” Trump said.

The President said he spoke with the chiefs of America’s leading grocery stores and they assured him they are stocking up more than they would during the Christmas season.

Trump’s comments came a day before his administration announces “advanced guidelines” on Monday on containment and mitigation strategies against the pandemic.

“You’re going to be hearing more about advanced guidelines and more precise instructions of how we could implement this mitigation within the community,” Fauci said.

He said the US was at a “very critical point” in the battle to flatten the curve of the COVID-19 spread.

“Now, if you look at the curves that I’ve described multiple, multiple times, this window that we’re in is going to be very important for us to stay ahead of this curve,” Fauci warned.

In the same briefing, Trump praised the US Federal Reserve which took emergency economic measures on Sunday slashing its benchmark interest rate to zero and committing to buy $700 billion in treasury and mortgage bonds.

Trump reassured Americans that he is using the “full power of the federal government” to defeat the coronavirus”.

“We will do whatever it takes and we’re doing really, really well,” he said.

The COVID-19 pandemic has killed more than 60 Americans and more than 5,800 people worldwide. Over 156,000 people have been infected globally.

Speaking about the danger of the virus, Trump described its potency as “incredible”. 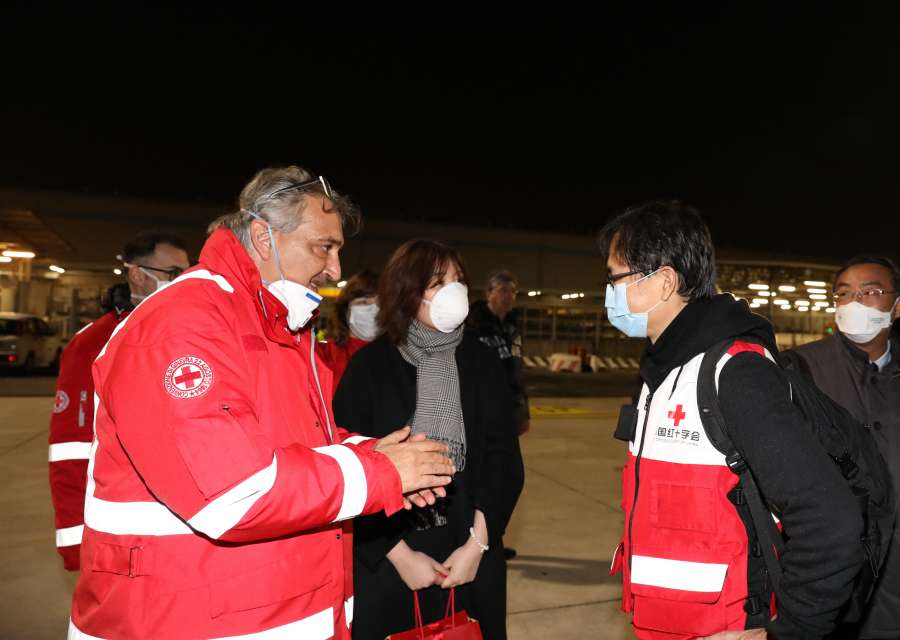 The Federal Reserve has taken the extraordinary action of slashing the interest rate effectively to zero in emergency action to prop up the US economy battered by the coronavirus crisis and facing the risk of a recession.

Federal Reserve Chairman Jerome Powell said on Sunday evening that the rate cut and other actions were taken were meant to help the US “weather this difficult period.”

Other measures announced by the Federal Reserve, the country’s central bank commonly referred to as the Fed, include pumping $700 billion into the US economy by buying government bonds worth $500 billion and $200 billion of mortgage-backed securities.

This is expected to lower the cost of long term debt and ease pressures on the housing market.

US President Donald Trump, who had been criticising Powell for not cutting the interest rate and taking other measures to stimulate the economy, congratulated him after the Fed action was announced.

Powell predicted that the coronavirus pandemic will “have a significant effect on economic activity in the near term.”

To counteract this, he said, “We are prepared to use our full range of tools to support the flow of credit to help households and businesses.”

The Fed measures are aimed at lowering the interest rates banks charge consumers and businesses and making loans available to them to meet the setbacks from the coronavirus.

The measures are the biggest steps taken since the 2008 financial crisis that plunged the nation into a recession, which now stares it in the face as many businesses are being forced to cut back operations and tens of thousands of workers are at risk of losing their jobs.

The stock markets have plunged about 20 per cent since the highs in February, despite the about 9 per cent bounce on Friday, putting them in bear market territory.

The latest measures follow the Fed’s offer last week to make $1.75 trillion available for the bond market to ensure funds availability for its operations.

On Friday, Trump declared a national emergency that he said would make available $50 billion to fight the fallout of the coronavirus crisis.

The House of Representatives passed a massive relief package on Saturday morning that will be taken up by the Senate next week.

The package known as Families First Coronavirus Response Act is backed by Trump and many Republicans and it provides for paid sick leave, family leave and free testing for COVID-19.

The US now joins several countries like Japan, Germany, France and the Netherlands that have zero or negative interest rates.