The Office for Budget Responsibility said that this was based on an assumption that the current lockdown would last for three months. Once restrictions were lifted, the OBR said it expected no lasting damage…reports Asian Lite News 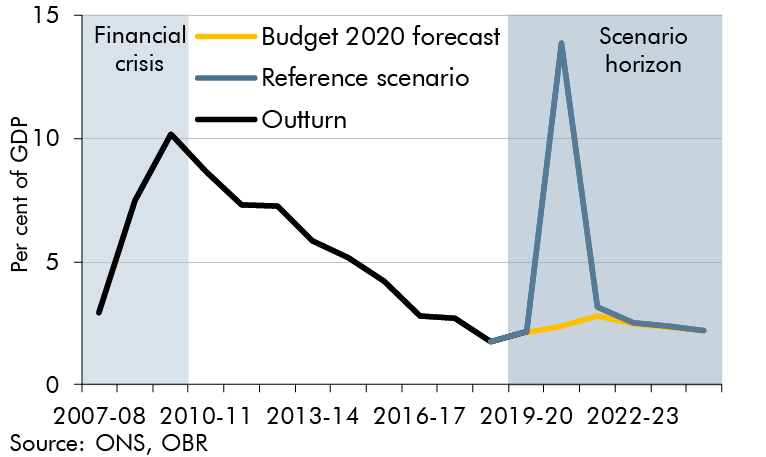 Britain’s independent tax and spending watchdog has warned the coronavirus pandemic could see the UK economy shrink by a record 35% by June, reports BBC.

The Office for Budget Responsibility said that this was based on an assumption that the current lockdown would last for three months. Once restrictions were lifted, the OBR said it expected no lasting damage.

Separately, the International Monetary Fund warned the virus would push the UK into its deepest slump for a century.

It said the pandemic had plunged the world into a “crisis like no other”.

Meanwhile, there are lots of criticism against the governments support to the small and medium enterprises.  A survey conducted by the Office for National Statistics (ONS) said some 59 per cent of the companies did not know or were not confident that they had the financial resources to continue operating through the crisis. ONS contacted 4600 companies for the survey.

The proportion soared to more than 70 per cent for companies working in construction, arts and entertainment, and accommodation and food services. Nearly half of businesses also reported that their turnover was lower than normal, with only professional and ITC services reporting they were unaffected. The Financial Times reported.

Despite the government’s job retention scheme, 29 per cent of businesses said they had to reduce staff numbers in the short term and a similar proportion reported cutting working hours. The ONS experimental data covered the period between March 9 and 22; the research had been started recently to provide an up-to-date picture of the economy.

Almost three weeks after the chancellor, Rishi Sunak first launched the scheme to help small and medium-sized businesses with loans and other financing of up to £5m each, the Guardian reported that just 4,200 of the estimated 300,000 firms that sought help online have received rescue loans.

Tens of thousands of firms are understood to have made formal applications, but amid accusations of excessive bureaucracy and a reluctance among lenders to make loans, only a fraction have been given the go-ahead

Mr Sunak said banks were working through a backlog after overwhelming demand.

“Well I’m speaking to the banks every single day. What I’m improving over the weekend is that all the banks had their staff in over the Easter weekend helping to process the backlog,” he added. “ There was an overwhelming demand early on, that backlog is being worked though, so I think you’ll see the numbers tick up considerably into the thousands this week, which will be comforting. It’s something that we’re looking at very closely.

“What I would say as well is the acceptance rates on applications, the data we’re getting through are actually reasonably high and also banks are extending overdrafts, but you’re absolutely right getting credit to small and medium-sized businesses is a critical part of our plan, it’s something that we are watchful of every single day and working with the banks to make sure, that that happens.”

The OBR’s forecast – which is just focused on the virus’ impact on the UK economy and public finances – is more severe.

It said a three-month lockdown followed by three months of partial restrictions would push up Britain’s borrowing bill to an estimated £273bn this financial year, or 14% of gross domestic product (GDP). This would represent the largest deficit as a share of GDP since World War II.

While borrowing is expected to jump, the OBR said the government’s unprecedented financial help for workers and businesses would help to limit any long-term damage.

“Once the crisis has passed and all the policy interventions have unwound, borrowing falls back relatively quickly to roughly the Budget forecast, but net debt would remain around £260 billion (10 per cent of GDP) higher by 2024-25. We indicate how the impact might vary if the restrictions were in place for longer or shorter periods – but there are huge uncertainties both around the impact on the economy and what that would mean for the public finances,” the OBR predicted.

It expects half of the sharp drop in economic growth in the second quarter to be reversed in the three months to September.

While the UK economy is expected to contract by 13% for the year as a whole, the UK is expected to get back to its pre-crisis growth trend by the end of 2020.

The OBR expects a more lasting impact on unemployment, which is estimated to rise by 2.1million to 3.4 million by the end of June.

Under this scenario, unemployment would hit 10%, from its current 3.9% rate, before easing to around 7.3% at the end of the year.

The OBR expects UK debt to remain elevated for years to come, with extra borrowing expected to push Britain’s debt share to above 100% of GDP this financial year. While this will drop sharply as the UK economy recovers, public debt is expected to remain at 84.9% of GDP in four years time, much higher than the 75.3% forecast in the March budget. However, the OBR said extra spending by the Treasury to support the economy was crucial to limit the economic damage.

“The government’s policy response will have substantial direct budgetary costs, but the measures should help limit the long-term damage to the economy and public finances – the costs of inaction would certainly have been higher.”

It added that while the lockdown was the main constraint on economic activity, relaxing these measures too soon would cause greater damage.

“The reason why most of the short-term economic impact comes from these measures is that they are successful in limiting the spread of the disease. If the measures were not stringent enough to control the disease, then the economic impact from illness would be that much greater.”