Prime Minister Boris Johnson said Hong Kong’s freedoms were being violated by a new security law and those affected would be offered a “route” out of the former UK colony.

About 350,000 UK passport holders, and 2.6 million others eligible, will be able to come to the UK for five years. And after a further year, they will be able to apply for citizenship, BBC reported.

British National Overseas Passport holders in Hong Kong were granted special status in the 1980s but currently have restricted rights and are only entitled to visa-free access to the UK for six months.

Under the government’s plans, all British Overseas Nationals and their dependants will be given right to remain in the UK, including the right to work and study, for five years. At this point, they will be able to apply for settled status, and after a further year, seek citizenship.

Mr Johnson said Tuesday’s passing of a new security law by the Hong Kong authorities was a “clear and serious breach” of the 1985 Sino-British joint declaration – a legally binding agreement which set out how certain freedoms would be protected for the 50 years after China assumed sovereignty in 1997.

“It violates Hong Kong’s high degree of autonomy and threatens the freedoms and rights protected by the joint declaration,” he said.

“We made clear that if China continued down this path we would introduce a new route for those with British National (Overseas) status to enter the UK, granting them limited leave to remain with the ability to live and work in the UK and thereafter to apply for citizenship. And that is precisely what we will do now.”

Labour said it welcomed the government’s action but said there must be no discrimination on those allowed into the UK on the basis of income or other factors.

Shadow foreign secretary Lisa Nandy said the UK also had a responsibility to consider the welfare of those who were not able to re-locate or who wished to stay in Hong Kong.

She urged the government to work with its international partners, through the UN, to force an inquiry into police brutality in Hong Kong and also called for the UK to re-examine its commercial relationship with China.

“For too long in relation to China we’ve had no strategy at home and no strategy abroad. I hope he can give us a commitment today that this marks the start of a very different era,” she said.

Taiwan inaugurated an office on Wednesday to help Hong Kong citizens wishing to study, do business, invest or apply for asylum in response to China’s controversial security law for the city which has come into force.

The new office began operations on Wednesday, the day on which Hong Kong is commemorating the 23rd anniversary of its return to Chinese sovereignty, reports Efe news.

Taiwan’s China-policy making Mainland Affairs Council had announced the creation of this department on June 18 “to correspond to the CCP’s (Chinese Communist Party) imposition of the National Security Law on Hong Kong, an action of which has caused unrest in its society”.

“It aims to provide friendly and streamlined services and basic care for Hong Kong citizens arriving in Taiwan in need of assistance, as well as for Hong Kong-based multinational companies and international corporations relocating to Taiwan,” the Council said in a statement.

The new office, which is officially known as the Taiwan-Hong Kong Office for Exchanges and Services, is located at the headquarters of the Taiwan Foundation for Democracy and is part of the Hong Kong Humanitarian Aid Project.

“This is an important landmark for the government to further realize its support for Hong Kong’s democracy and freedom,” Chen Ming-tong, the head of the Mainland Affairs Council, told reporters on Wednesday.

He said that the Chinese law “not only targets residents in Hong Kong” but is “also an order issued by the Celestial Empire to people all over the world”, in a reference to China’s government.

“The whole world needs to be concerned” about the law, Chen added, according to Taiwan’s official agency, CNA.

The law establishes sentences of up to life imprisonment for “acts of secession, subversion, terrorism and collusion with foreign forces to endanger national security”. 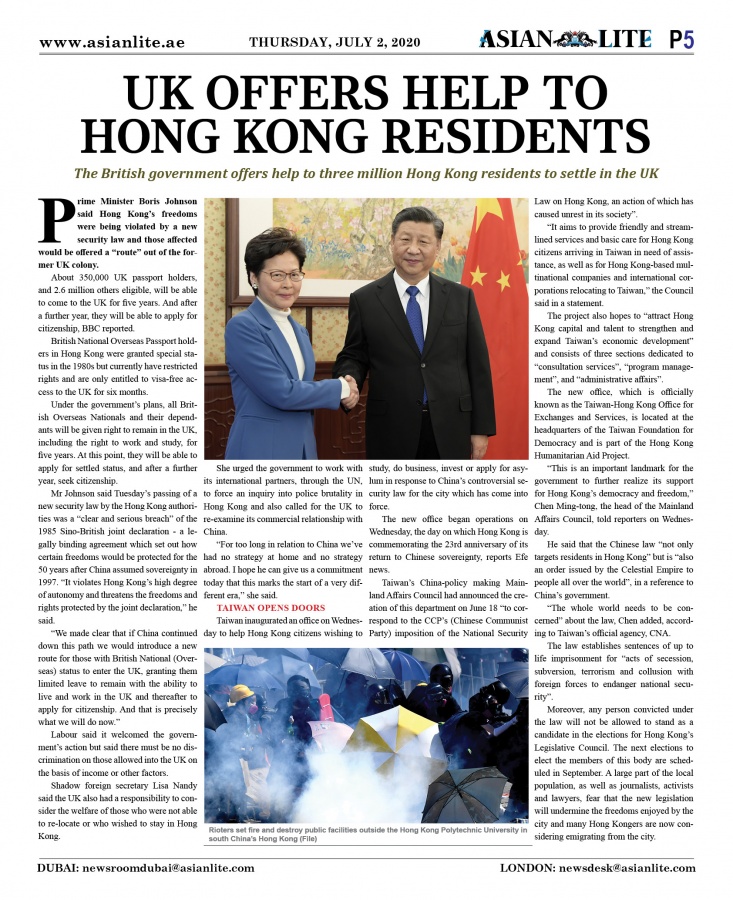 Moreover, any person convicted under the law will not be allowed to stand as a candidate in the elections for Hong Kong’s Legislative Council.

The next elections to elect the members of this body are scheduled in September.

A large part of the local population, as well as journalists, activists and lawyers, fear that the new legislation will undermine the freedoms enjoyed by the city and many Hong Kongers are now considering emigrating from the city.