It has been revealed that a UK parliamentary group, whose aim is to highlight alleged human rights violations in Kashmir, received 30 lakh PKR ($17,917) from Islamabad for a visit to Pakistan occupied Kashmir (PoK).

The register of all party parliamentary groups reveal that “All Party Parliamentary Group on Kashmir” (APPGK), which is chaired by Labour MP Debbie Abrahams, received a benefit of between 29.7 lakh PKR and 31.2 lakh PKR on February 18 from the Pakistan government for a visit to PoK between February 18-22.

Parliamentary groups are bound to declare benefits and money received worth more than 1,500 pounds on the parliamentary register.

Abrahams was deported to Dubai on February 17 after being informed at Delhi Airport that her e-visa was not valid.

The following day she flew to Pakistan and met Prime Minister Imran Khan, all funded by Islamabad.

The APPGK, which is made up of cross party British parliamentarians some of Pakistani heritage, aims at supporting the right to self determination of Kashmiris; to seek support from UK MPs; to highlight the human rights abuses in Kashmir and to seek justice for people there.

This is not the first time APPGK has received funds from Pakistan. 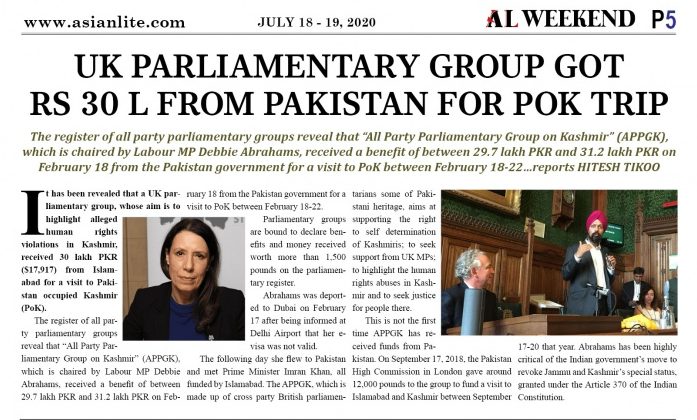 On September 17, 2018, the Pakistan High Commission in London gave around 12,000 pounds to the group to fund a visit to Islamabad and Kashmir between September 17-20 that year.

Abrahams has been highly critical of the Indian government’s move to revoke Jammu and Kashmir’s special status, granted under the Article 370 of the Indian Constitution.

On August 5, 2019, she wrote to India’s then High Commissioner in London, Ruchi Ganshyam, expressing serious concern about the removal of Kashmir’s special status.

The same day, she wrote to the UK Foreign Secretary Dominic Raab saying the Indian actions in Kashmir violated international law and requested the UK to call for a temporary prohibition on New Delhi’s moves.