The British government is considering minting a coin with Mahatma Gandhi’s image amid calls for recognising the contributions of people from Black, Asian and other Minority Ethnic (BAME) communities, according to media reports.

Mahatma Gandhi is set to be the first non-white person to feature on British money.

According to media reports, the Royal Mint Advisory Committee is working to create a coin featuring the anti-colonial campaigner, who led the protest against British rule in India.

This comes after UK Chancellor of Exchequer Rishi Sunak had announced his support behind a campaign for BAME figures to feature on coins, saying their contribution to Britain should be recognised.

The Banknotes of Colour campaign has been urging the government to consider featuring non-white individuals on British coins or notes.

A non-white individual has never featured on coins or notes in the UK.

The government’s interest is the “culmination” of two and a half years of hard work, Zaidi told The Independent newspaper.

“Notes and coins ï¿½ if you see Bank of England and Royal Mint websites ï¿½ are supposed to reflect those who we feel contributed to our history, economy, and culture as a nation.

“Our campaign felt an absolute urgency to acknowledge that ethnic minorities have been part of that conversation and achieved so much. We hope it helps build cohesion, inspires young people and unites us as a nation that we all have an equal stake and contribution in society.

“Unity now is more important than ever, especially given some of the divisions we see online, the divisions we have faced post Brexit. Let’s move forward, positively, acknowledging all our contributions,” Zaidi added. 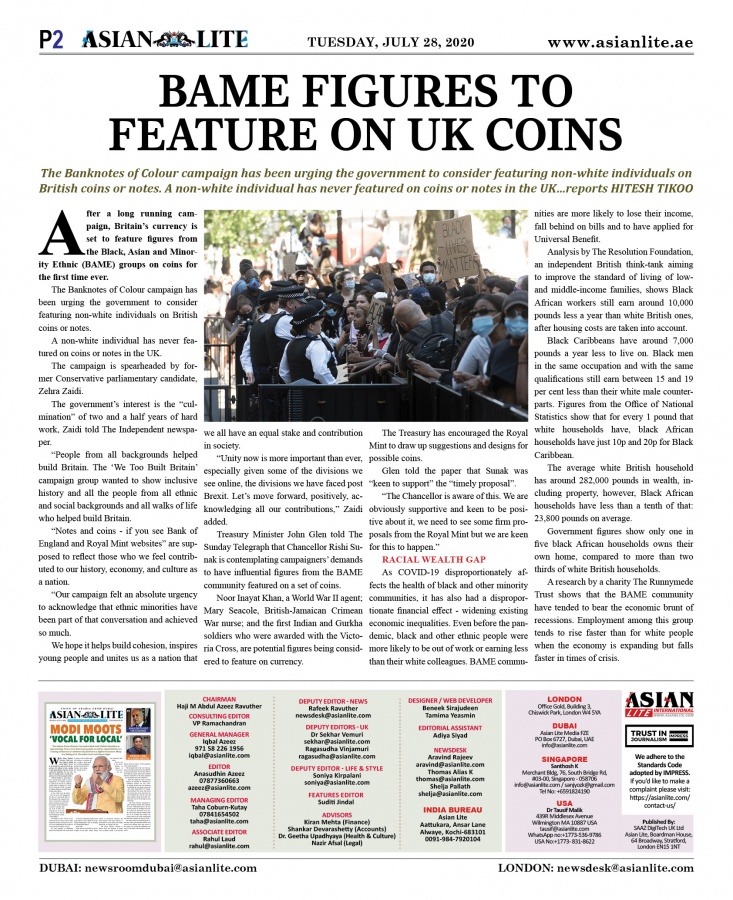 Treasury Minister John Glen told The Sunday Telegraph that Chancellor Rishi Sunak is contemplating campaigners’ demands to have influential figures from the BAME community featured on a set of coins.

Noor Inayat Khan, a World War II agent; Mary Seacole, British-Jamaican Crimean War nurse; and the first Indian and Gurkha soldiers who were awarded with the Victoria Cross, are potential figures being considered to feature on currency.