For Chinese Ambassador in Bangladesh, Li Jiming, bringing Chinese companies to Dhaka is not the only priority. His ostensible goal seems to be expediting several key projects, including the ultra-modern submarine base project, BNS Sheikh Hasina, in Pekua, Cox’s Bazar.

China has already delivered two submarines to Bangladesh Navy in its desperate bid to expand its footprints in the Indian sub-continent.

In a joint statement of China and Bangladesh last year, Sheikh Hasina had not only backed Jinping’s Belt and Road Initiative (BRI), but she also agreed with China’s plans to bolster defence industry, including strengthening Bangladesh Navy and maritime management in Bay of Bengal.

Though New Delhi enjoys cordial relations with the Sheikh Hasina government, Beijing eyes to increase its presence in the sub-continent through delivering subsidised infrastructure projects like ports, airports or the ongoing submarine base in Cox’s Bazar.

Top sources in Indian intelligence agencies revealed to IANS that Chinese state-owned company Poly Technologies Inc (PTI) has been assigned the submarine base project and a full-fledged construction, estimated to be worth 10,300 crore Bangladeshi taka, has begun at the site. The submarine base would have facilities like wharfs, barracks, ammunition depot and repairing dock.

Sources in Indian agencies said that at the behest of Beijing, Chinese Ambassador Li Jiming has been tasked to expedite several core infrastructure projects in Bangladesh, including that of Cox’s Bazar.

Li Jiming, who earlier had a stint with the government of Yunnan province, reportedly has a good rapport with top commanders of the People’s Liberation Army Navy (PLAN), currently overlooking the submarine project. Li Jiming also played a key role in the quick delivery of Chinese made Corvette to the Bangladesh Navy.

Bangladesh had earlier received two submarines from China in 2016-17, which are operating from a makeshift base in Cox’s Bazar. After procuring these submarines, Dhaka had approached Beijing to lend its hand in building a modern submarine base for Bangladesh Navy. 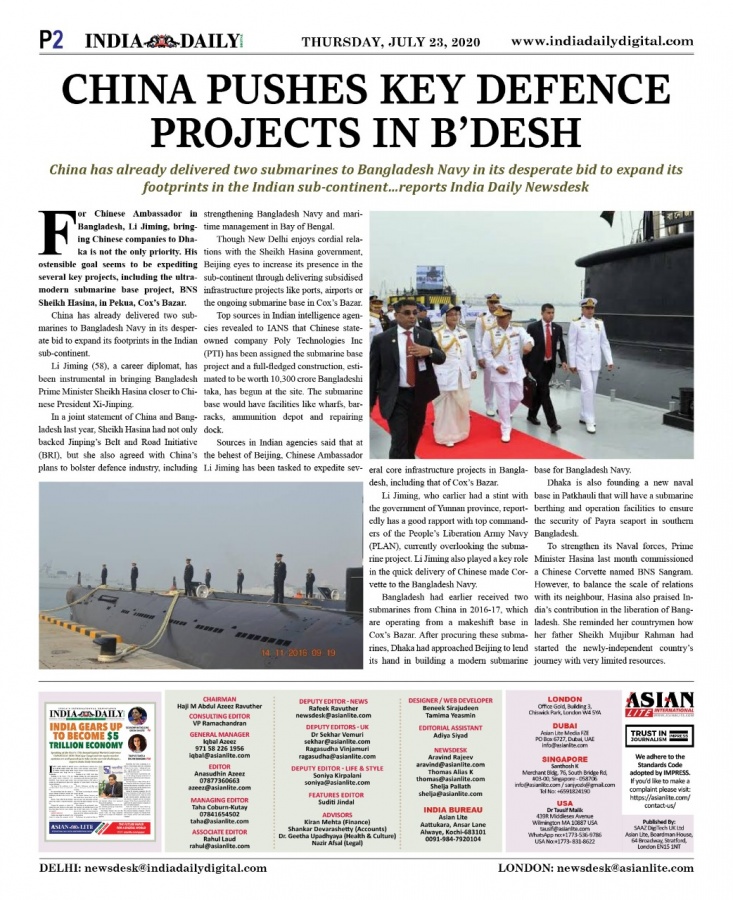 Dhaka is also founding a new naval base in Patkhauli that will have a submarine berthing and operation facilities to ensure the security of Payra seaport in southern Bangladesh.

To strengthen its Naval forces, Prime Minister Hasina last month commissioned a Chinese Corvette named BNS Sangram. However, to balance the scale of relations with its neighbour, Hasina also praised India’s contribution in the liberation of Bangladesh. She reminded her countrymen how her father Sheikh Mujibur Rahman had started the newly-independent country’s journey with very limited resources.