A month and a half after the violent face-off with Indian soldiers along the Line of Actual Control (LAC) in Ladakh, Chinese troops have disengaged but built and retained several news constructions in the Pangong Tso area, as per the latest satellite images.

Early this month, both the countries withdrew from the disputed Patrol Post 14 (PP14) in Galwan Valley where 20 Indian soldiers and an unknown number of Chinese troops had been killed in a violent clash on June 15. The withdrawal created a 3km buffer zone between both sides in the Galwan valley but the face-off continued in the Pangong Tso area.

Satellite images of July 15 from Maxar show that though Chinese constructions at the Foxhole point have been taken down, the PLA has set up several red tarpaulin tents and build up its earthen defences there.

“It is clear that these are Chinese tents because PLA’s tents are red tarpaulin and the trails lead to the Chinese side. Also, PLA uses only square tents and Indians use round and igloo-shaped tents,” a senior defence analyst confirmed.

“Several other tents are also visible on the heights over Finger 4 marking the LAC exactly where Google Earth says the LAC is,” the analyst said.

The LAC between India and China in the mountainous cold desert of Ladakh runs through land and water including the 135 km-long Pangong Tso, which is the world’s highest saltwater lake.

The slopes of the mountains surrounding the lake jut forward into Pangong Tso at eight different points which are assigned numbers and called “fingers”. Though all the eight fingers are Indian territory but over time, PLA troops have slowly made incursions and now reached upto Finger 4. Before the June 15 clash in Galwan Valley, Indian and Chinese troops were locked in violent face-off in Pangong as well.

On Friday, India and China, in their 17th round of Working Mechanism for Consultation and Coordination (WMCC) on India-China Border Affairs meeting, reiterated their agreement for complete disengagement and de-escalation.

Official sources confirmed that there has been “no breakthrough in talks” held between India-China on Saturday. “There was usual talk of both sides working on disengagement etc, while on the ground, China keeps holding ground near Finger Five in Pangong. Both sides are consolidating their positions. More Commander level talks have been proposed,” a source said. 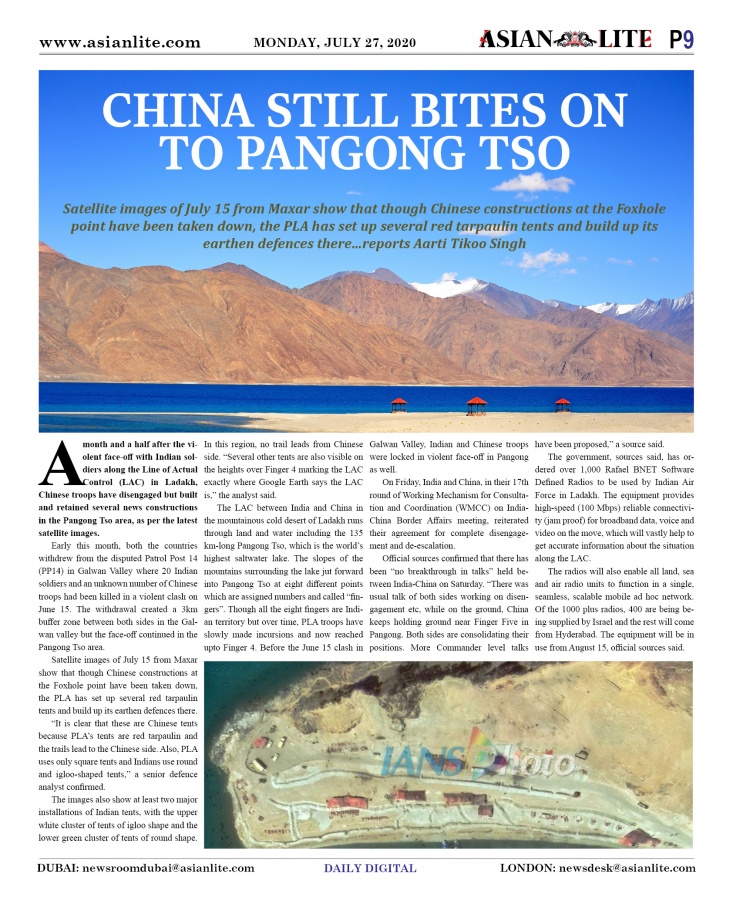 The government, sources said, has ordered over 1,000 Rafael BNET Software Defined Radios to be used by Indian Air Force in Ladakh. The equipment provides high-speed (100 Mbps) reliable connectivity (jam proof) for broadband data, voice and video on the move, which will vastly help to get accurate information about the situation along the LAC.

The radios will also enable all land, sea and air radio units to function in a single, seamless, scalable mobile ad hoc network. Of the 1000 plus radios, 400 are being being supplied by Israel and the rest will come from Hyderabad. The equipment will be in use from August 15, official sources said.