Chinese President Xi Jinping has a ‘people’s problem’. He firmly controls the fate of 1.4 billion people but is unable to handle the defiance of a mere seven million who inhabit the tiny island of Hong Kong.  They ask what he will not give them: Freedom of thought and expression, human rights and respect for their island’s autonomy. He demands what they refuse to allow: Increasing control of the Mainland over Hong Kong.

These millions are fighting with their backs to the sea since the handover of Hong Kong from the UK in 1997 for a 50-year lease of freedom that allows them to continue to embrace capitalism and enjoy political freedom unheard of on the Chinese mainland.

Nearly half way through this lease, these millions today resist China’s attempts to convert the handover into a takeover of Hong Kong.

For the present, the mainland is making its most serious bid till date to increase its grip over the island. It is in the process of passing a new anti-sedition law that gives the mainland the power to handle certain criminal cases. It raises the prospect of suspects being extradited to the mainland to face trial and punishment.

Forced to withdraw the earlier extradition bill under pressure of protests, the Chinese government took a backdoor route this time: China’s National People’s Congress passed a resolution asking its Standing Committee to introduce anti-sedition rules into the Basis Law that governs Hong Kong.

The proposed law subordinates existing law to the national security bill. This means the latter will prevail when there is a conflict. This law is sought to be passed by amending the national law, bypassing the legislature of Hong Kong.

The law, if it comes into force, will criminalize “treason, secession, sedition, subversion” against the central government. It will enable Chinese national security agencies to operate from Hong Kong.

Similar laws are in existence on the mainland to subjugate any mood of defiance in the political, economic, cultural and media spheres. Secret detentions, disappearance of suspects, their persecutions are common. Ask the lawyers, journalists, human rights activists, supporters of democracy, even Nobel laureates.

Beijing justifies the harsh law saying many mainland offenders are currently hiding in Hong Kong and the existing laws need amending to see that they are taken back to the mainland. There is also the issue of lack of an extradition agreement between Hong Kong and Taiwan.

What makes Beijing’s guarantee of fair trial and legal safeguards suspect is its unwillingness to incorporate them in the law. The people of Hong Kong have hardly any trust in the mainland judiciary which is seen a puppet of the political arrangement.

Beijing’s move comes in the wake of ever-increasing tenor of the Hong Kong protests. Last year, the Chinese government was forced to withdraw Hong Kong Chief Executive Carrie Lam’s amendments to the extradition laws that would allow criminal suspects to be sent to mainland China for trial.

The people of Hong Kong have been restless since the Tiananmen Square killings in 1989. They have taken to the streets every time Beijing tried to assert its control over them.

Of late, the worry of President Xi is that the protests against stringent laws may gradually convert to calls for democracy and eventually, for independence. After all, the 50-year lease of life of Hongkongers expires in 2047. China has not indicated what it wants to do with the island at that time.

The islanders no longer appreciate the prospect of unification. people are already toying with the thought of becoming independent. They have been separated from mainland culture and politics for over one and a half centuries.

They are largely Cantonese who speak and write in English, are western influenced and love freedom, human rights, democracy and rule of law. The youth identify themselves more as “Hongkongers” than Chinese.

China, freaking about the adamancy of Taiwan to remain independent, sees Hong Kong as another headache. It has repeatedly warned the island protesters it would idly watch any threat to Chinese “security and sovereignty”.

President Xi is sure of one thing, that the islanders will not cease protests. He would normally want to quell them by force. The new law is one such force. But he is forced to contend with the world’s reaction.

The United States has threatened the special status for Hong Kong if the new law is brought into force. The European Union took a step ahead and conveyed a stern video message to President Xi and Premier Li Keqiang. President Xi cannot ignore the EU message considering that till now the EU has not really been assertive against China because of the latter’s fiscal agreements with several member-states. The Group of 7 is also not amused.

Can China afford to ignore the world community? What facts weigh on its mind? Hong Kong is a golden goose, its share of China’s global trade standing at 50.8 per cent in 2019. Mainland provinces like Guangdong are outward processing bases for the island. Over 200 mainland companies have regional headquarters in Hong Kong. Nearly 30 licensed banks in the island are linked to the mainland. 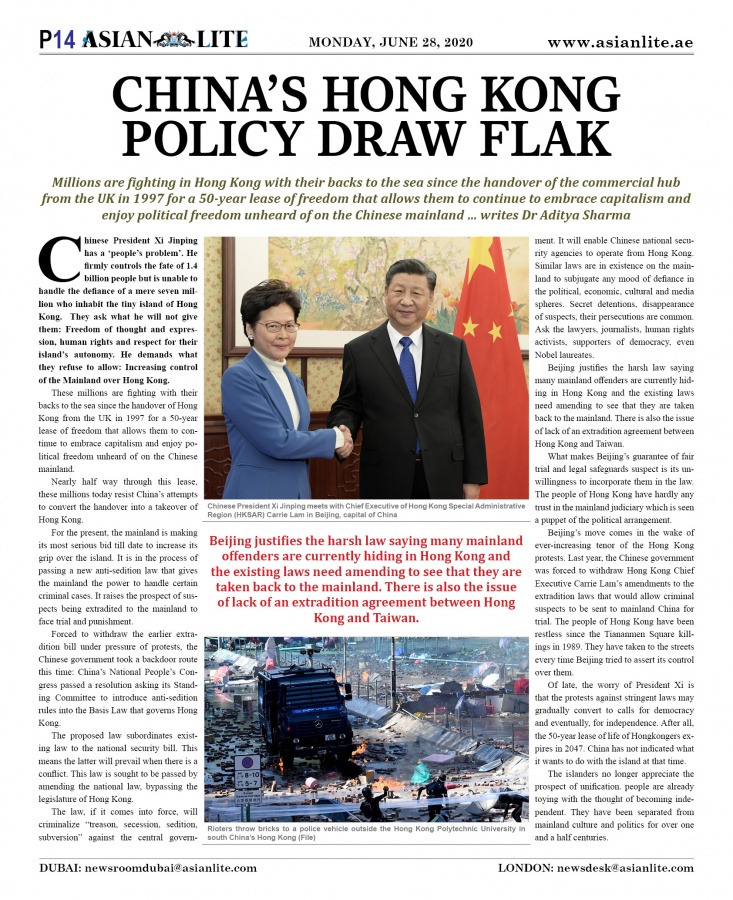 The US needs Hong Kong too. It is its 21st largest trading partner and a regional base for 300 American companies and regional office for over 400 more companies. Americans find in Hong Kong transparent and fair financial and legal systems, while ri8ch expatriates get attracted to the island. Chinese control will endanger this climate in Hong Kong for the west.

Both China and the US will tread cautiously, therefore. China would not want to drag the situation to the extent that it endangers Hong Kong’s economy by inviting US sanctions. The US wouldn’t want to disturb its equations either.

This can possibly lead to the United States to target China directly, by cutting off its access to US dollars. The US can cut Chinese financial bodies from the US dollar payments system while avoiding a veritable financial war with China over the island, the South China Morning Post wrote recently.

How will that affect China? China needs US dollars to pay for its imports and “payments on US dollar-denominated debt” after Covid-19. This is because China, thanks to the Covid lock down, is unable to earn adequate foreign exchange due to stalled exports and lack of tourism.

The US has party choked the Chinese firms in the United States from raising dollars by forcing the firms to comply with stricter audit rules. Non-compliance would result in their delisting from the stock markets. The trade war with the US is as it is hurting China, which additionally faces the threat of US, EU and Japan withdrawing their manufacturing firms from China. 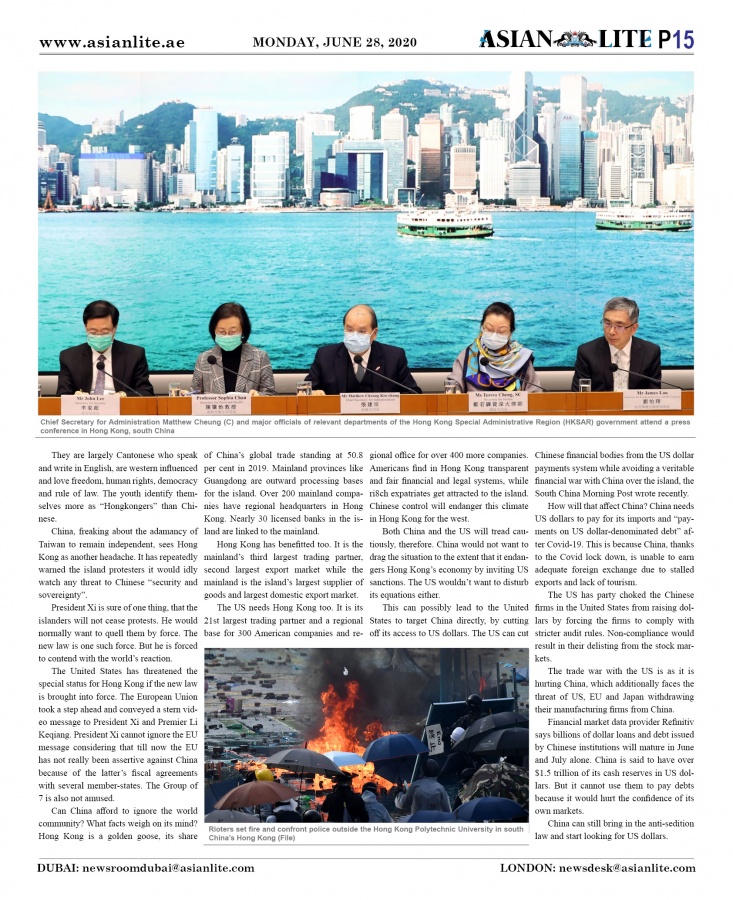 Financial market data provider Refinitiv says billions of dollar loans and debt issued by Chinese institutions will mature in June and July alone. China is said to have over $1.5 trillion of its cash reserves in US dollars. But it cannot use them to pay debts because it would hurt the confidence of its own markets.

China can still bring in the anti-sedition law and start looking for US dollars.