This year, for the first time since 1990, China did not announce (May 22) a GDP growth target during the annual National People’s Congress. Prior to that, China’s National Bureau of Statistics announced (Apr 17) that the country’s economy had recorded a 6.8 percent contraction in the first quarter of 2020. It was the first time since 1976 that China acknowledged an economic shrinkage.

China’s extraordinary, nearly half-century-long growth has come to an end, all because of the COVID pandemic, right? No, wrong!  The fact is that the fiscal condition of the world’s second largest economy was in dire straits even before the pandemic struck. COVID only made it worse. The glitz and the swank that the ruling Chinese Communist Party (CCP)’s propaganda machinery portrayed to the outside world was already hollow. China’s economic superpower image was merely an illusion. In reality, economy has been one of China’s major fault lines for some years now. It was a bubble that was deflating and destined to burst sometime soon.

China’s GDP, which recorded impressive two-digit growth rates from 2003, peaking in 2007 at 14.2 percent, has since been on a downward slide. It stood at 6.6 percent in 2018, and the 6.1 percent of 2019 marked the slowest pace of growth since 1990. The reasons for this sluggishness are structural issues that run deep and have been building for years. They include over-investment; low industrial productivity; high debt; modest consumer spending; and demographic changes.

In the 1990s and early 2000s, China was building wealth in a way that was appropriate then. Factories that produced competitive products mushroomed, and miles of bridges and roads connecting cities and towns were built. These investments created job and income opportunities for the people, while expanding the productive capacity of the economy. Even now China is trying to build wealth, albeit the wrong way. It is pursuing investments that do not raise the country’s productive capacity or growth potential. It is building bridges and roads to nowhere! Productivity has consistently dropped over the last decade.

In addition to overspending on infrastructure, China is also boosting consumer and industrial spending by expanding available credit. The country has been piling up massive amount of debt – by consumers and local governments in particular. In 2019, China’s total corporate, household and government debt rose to US$ 40 trillion – around 300 percent of its GDP and some 15 percent of all global debt. It is an irony that the country which has been laying debt-traps for other smaller countries is itself under such massive debt.

How would it repay it? An effective means would be to move from investment-led growth to consumption-led growth. But is that even feasible, considering the unemployment rate and declining purchasing power of the people of China?

As the Chinese economy was going downhill, many industries and businesses closed down, leading to massive lay-off and stunted wage growth. In early 2019, the unemployment rate stood at 5.3 percent, the highest in two years. And in the post COVID-19 scenario it has only become worse, edging to historical highs, forcing even the Chinese Communist Party (CCP)’s mouthpiece, Global Times, to admit that wages would fall in 2020 due to layoffs by small businesses.

Consequently, the consumption capacity of the domestic Chinese market has also been falling. A classic example is that of car sales, which was accustomed to double-digit annual growth rate and accounted for 5 percent of China’s economic output. It started slumping in 2018. Similar has been the case with real estate and property market, indicating fall in people’s purchasing power. Massive income disparity between the rich coastal areas and the interiors add to the woes.

PRC Premier Li Keqiang recently admitted (May 28) that there were over 600 million people in China whose monthly income was barely RMB 1,000 (US$ 140), not enough to rent even a room in Chinese cities. If the leader of a Communist state, which always strives to cover its flaws and shortcomings, makes such a submission, it may be safely presumed that what he revealed was only the tip of the iceberg. The real situation is definitely much grimmer.

Adding to this, the demography of China also does not favour economic growth. China is ‘getting older’ and the working-age population has been shrinking since around 2012 – an inevitable result of the one child policy enacted in 1979. Estimates suggest that retirees could account for more than 40 percent of China’s population by 2050. China’s aging population will test the CCP’s ability to provide for its people.

The GDP growth target has been an indicator of the CCP’s economic confidence. Its absence this year is a clear signal that the current economic environment is the most challenging China has faced in decades. All the headwinds that China was facing before the pandemic have been compounded by the COVID. 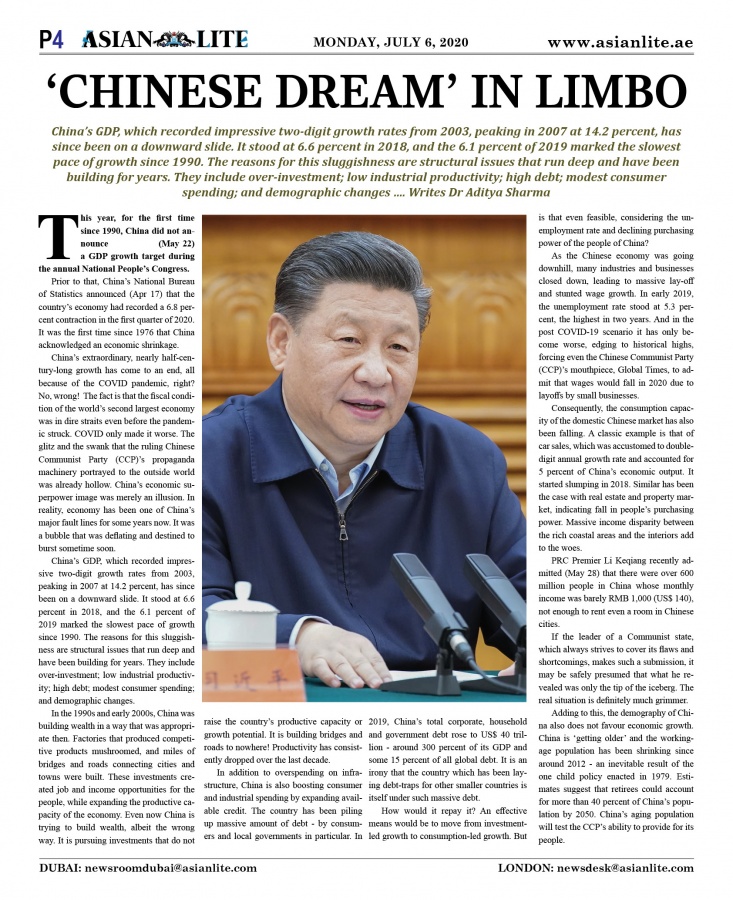 The key to CCP’s legitimacy is the guarantee of quality life, employment and stability. 2020 was meant to be a pivotal part of CCP leader Xi Jinping’s grand ‘Chinese Dream’ plan. By this year China had targeted to eliminate absolute poverty, and raise the quality and standard of life of its people. But the ‘Dream’ has shattered. Not just for Xi, but for billions of Chinese people who lay their trust in Xi and his administration’s ambitious plans. The economic crisis that China has been experiencing for some years now, represents a huge failure on part of the CCP. Millions of youngsters would be deprived of achieving the success and prosperity that they had seen their parents’ generation enjoy. Undoubtedly, they have all the reasons to question the legitimacy and authority of the CCP leadership, posing a challenge to the social stability of the country.