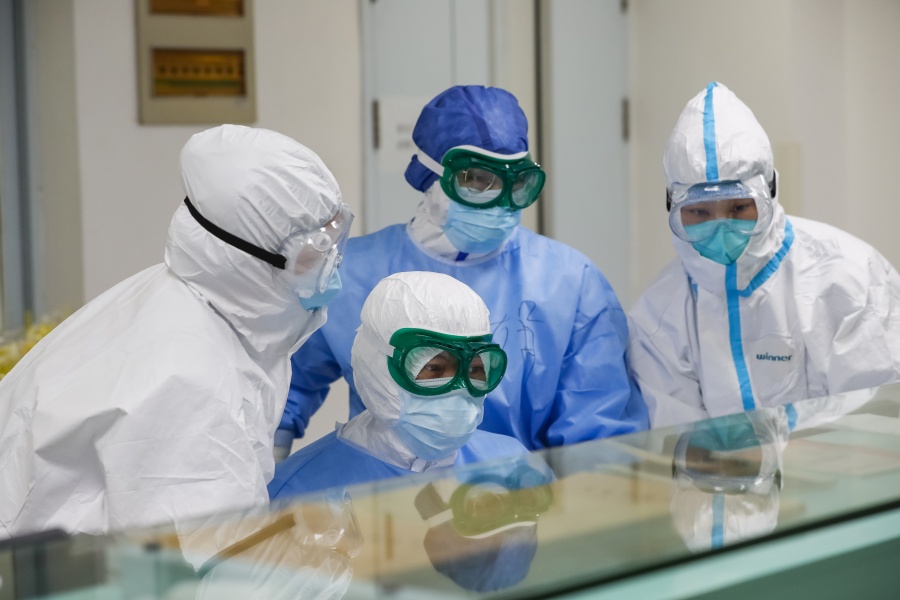 The SARS-CoV-2 virus first emerged in Wuhan, capital of the Hubei province of China somewhere in the month of November or early December. The virus has high transmissibility and was also found to be highly contagious. China was blessed to have doctors such as Dr Ai Fen and Dr Li Wenliang, among others, who quickly identified the virus to be similar to the SARS causing coronavirus and sought to warn fellow members of the medical community. However, both of them were warned by Chinese authorities for spreading “rumours” and Dr Li Wenliang was made to sign an undertaking by Wuhan Police to desist him from such conduct again. This action sent a chill in the medical fraternity of Wuhan and forced doctors to adopt deliberate indifference and ignorance towards a brewing crisis.

The matter was made worse by China’s top down control of information release. Even as the number of new infections was rising daily, the people of Wuhan were not adequately warned of the lurking danger. The Chinese leadership sought to instead allow the holding of the provincial congress of Hubei (from Jan 6-11th) and the grand feast (Jan 18) at Baibuting district of Wuhan where an estimated 40,000 people participated. Ultimately as the things started getting out of control, China reluctantly admitted to H-t-H transmission on January 20, after more than one and half months since the cases of new infections were detected. Moreover, it took 3 more days to impose lockdown in Wuhan by which, as per the admission of the Mayor of Wuhan, about 5 million people had flown out for Lunar New Year Holidays. Thus was set the cause for the worst pandemic of 21st century. Import of PPE’s: Many reports have cited that China did not warn the public or the countries of the world of the facet of H-t-H transmission during the crucial phase in mid-January as it had undertaken a clandestine operation of buying PPE’s from across the world. China used diplomatic channels, state-owned businesses and Chinese diaspora community associations to source PPE’s and send it to China. As a result when the outbreak started spreading to other countries, most of the countries faced shortage of PPE’s

Compromised WHO: The recently published article by Associated Press (June 3) has revealed that China delayed sharing vital details of the outbreak with the WHO team at a juncture where the spread of the outbreak could have been controlled. The article reveals that the WHO team was rendered helpless and infact had to adopt an unusual strategy of praising Chinese efforts in public just to coax more information from the Chinese authorities. It also cannot be coincidence that after Xi Jinping’s visit to Wuhan on March 10, by which time, the number of new infections in China had dropped significantly, the WHO declared COVID-19 to be a global pandemic on March 11 though enabling conditions to declare so had already been reached in February itself

Moreover, despite many cases of infections being detected of individuals who had not been to the Huanan Sea Food Market, China chose to play down the aspect of Human-to-Human (H-t-H) transmission and even misreported to the WHO about it which led to the infamous tweet on Jan 14 which discarded the possibility of H-t-H based on the investigations reported by Chinese authorities.  Thus China’s actions not only kept its own people in the dark, it prevented countries across the world to take necessary counter measures as they did not have the necessary and adequate warning of the brewing health crisis. On the top of it, China insisted and applied diplomatic pressure on many countries to maintain air links with China. The flights that flew out of China in this crucial period of first half of January carried the virus with them and as things stand now, the virus has spread to more than 200 countries in the world.

Propaganda Campaign: As the COVID-19 caused havoc in countries across the world, China undertook a concerted “disinformation campaign” to absolve itself for the origin of virus, widely attributed to the unhygienic wet markets that sprawl across the length and breadth of China. Zhao Lijian, the Foreign Ministry Spokesperson tried to shift the blame on US for “introducing” the virus in Wuhan during the World Military Games held in Wuhan in October 2019. The bizarre claim, ultimately attributed as comments on his ‘personal’ Twitter account to counter China’s stigmatization alerted the world about Chinese designs to “desinicize” the virus. It was also reported (La Croix International, March 9) that confidential instructions were sent to Chinese embassies and favorable individuals around the world to ensure that the Chinese origin of the virus is never mentioned and doubts are raised about the origin of the virus with a focus on suggesting that perhaps the virus originally came to China from abroad.

Masks Diplomacy: As the domestic situation stabilized since the 1st week of March, China launched a massive ‘masks diplomacy’ campaign to help afflicted countries with PPE’s. While some were donations by the Chinese Government, others were in the nature of purely commercial contracts, a fact which the Chinese state media deliberately chose to be silent about so as to trumpet China’s help under the much publicized vision of ‘Community for Shared Future’. However, this masks diplomacy too had a Chinese touch to it. Some materials were sold at exorbitantly high prices while many consignments sent proved to be defective. Netherlands was forced to recall 6 lakhs masks because of defective filters while Spain and Turkey faced issues with testing kits which did not give accurate results.

The masks diplomacy also raised red flags as it was seen as an effort by China to deflect the blame from its initial mishandling of the virus. Moreover the massive publicity lent to Chinese assistance raised concerns of China trying to leverage the situation to create a divide in the Western Bloc by trying to portray itself as a reliable partner than the US. Joseph Borrell, EU’s High Representative called out China’s actions and called on member countries to be on guard against the ‘global battle of narratives’ including a struggle for influence through spinning and the ‘politics of generosity’ 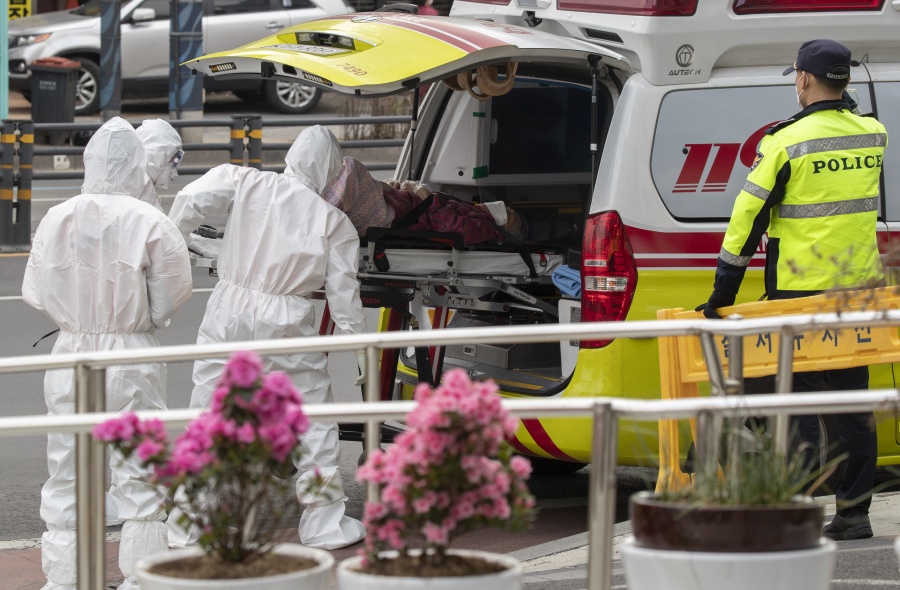 Milking the situation: The pandemic resulted in chaos and bloodbath in the markets across the world. As a result, many businesses and companies became available at cheaper valuations. China sought to take advantage of the situation. e.g China bought a 12.67% stake in cash strapped Norwegian Airlines, hit hard by the travel slump due to the coronavirus pandemic. The stake was picked by BOC Aviation, a Singapore based company. The company in turn is controlled by Sky Splendor Limited, which is in turn controlled by an investment arm of Bank of China and ultimately owned by the government of The People’s Republic of China. China’s prowling prompted European countries as well as Australia, India and Canada to revise their investment rules to address the takeover of their stressed domestic enterprises.

External Aggression: After emerging from pandemic, it would have been expected that any country would have a more inward focus on healing its people and focusing on economic development and restoration of normalcy. However, China chose a different path. While seeking to push restoration of normalcy, it also undertook aggression posturing in all possible realms. It undertook to impose the National Security Law in Hong Kong, undertook aggressive maneuvers in the Taiwan Strait and undertook an unprovoked intrusion into Indian territory in Ladakh region. These aggressive maneuvers were probably to send a message to the international community that it won’t be cowed down by the international criticism regarding its handling of the outbreak. China’s conduct displays that as it gets embattled, it is increasingly becoming more defiant. 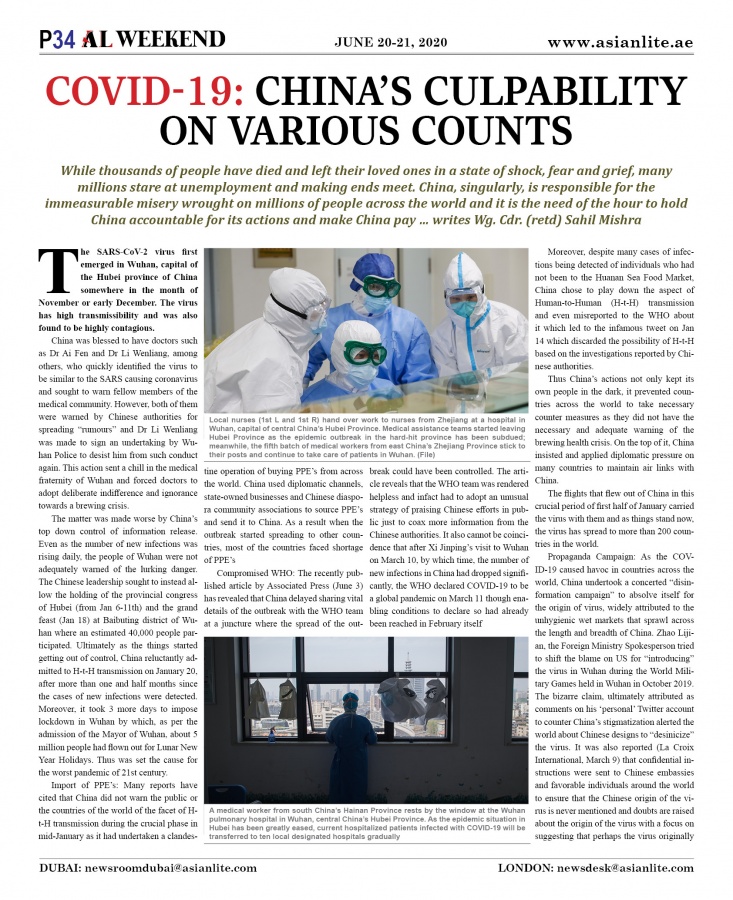 While thousands of people have died and left their loved ones in a state of shock, fear and grief, many millions stare at unemployment and making ends meet. China, singularly, is responsible for the immeasurable misery wrought on millions of people across the world and it is the need of the hour to hold China accountable for its actions and make China pay.

(Wing Cdr. (retd) Sahil Mishra. Sahil is a retired Air force officer. He is a National Defense academy alumni and completed his Air force training in Hyderabad getting commissioned as a fighter pilot. He took charge of ground duty after a decade long experience of flying MiG’s. He has worked in varied fields of work in IAF since then like, Personnel Management, Procurement and Training. He has pursued and completed post-graduation in English Honors and now writing keeps him busy post-retirement.) 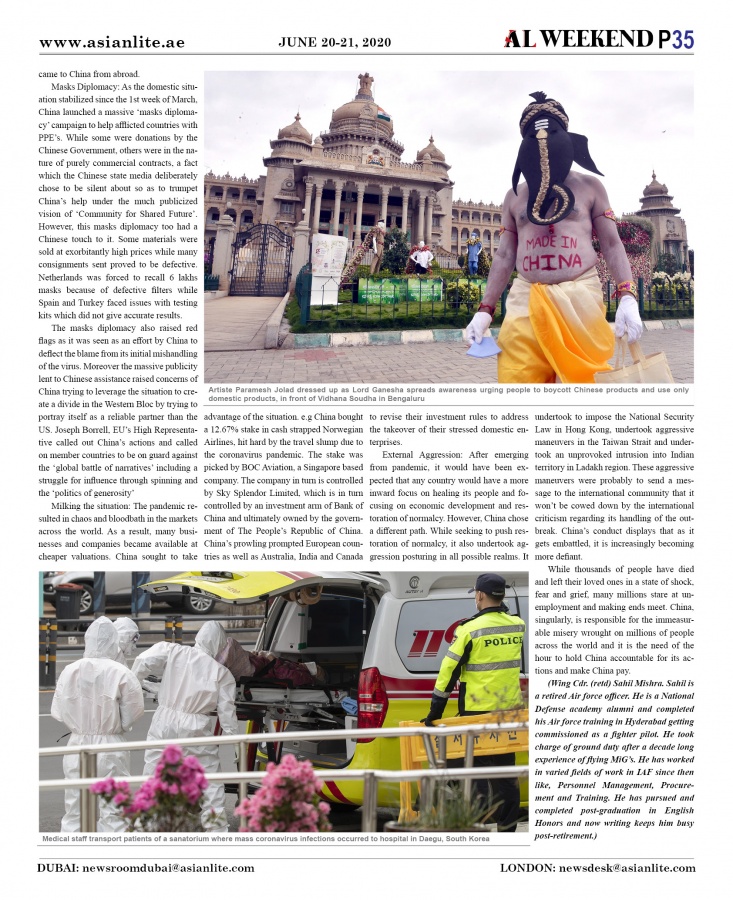