The spotlight is on China — and again not for any happy reason. As Chinas economy contracted by 6.8 per cent in the first quarter of 2020 and its unemployment rate touched 6.2 per cent in April, its burgeoning debt problem can finally catch the attention of the rating agencies. Its debt-to-GDP ratio stands at 317 per cent at present.

The country’s overall level of debt, driven primarily by real estate and shadow banking, has risen steadily in the last decade.

Deftly, China has kept direct borrowings by the central government at a reasonable level but the accounts of the local governments and its companies and banks are mired in a web which is difficult to analyse.

“The central government is not overleveraged and benefits from ample foreign currency reserves. But regional governments have expanded unsafe financial operations since 2007, and often resort to off-the-counter loans or shadow banking,” a study by the Committee of the Abolition of Illegitimate Debt in December 2018 revealed.

In China, corporate debt, including that of the state own enterprises and private companies, forms the largest chunk. That has been rising even as its overall external debt remained low.

Senior executives from two rating agencies whom IN spoke to refused to throw light on the issue.

As China gets cornered by the world for its handling of the coronavirus pandemic and suppression of information and subsequent military aggression with several countries including India, the rating agencies, which have hitherto been generous with the dragon nation, could soon take a tougher stand.

The opaque nature of information flow from the country is adding to the worry.

“It will soon come to the notice of the rating agencies as now global pressure is building on China and its functioning,” an analyst said.

“While China’s lending traditionally comes from the major state-controlled banks, there has been a gradual shift towards less transparent alternative lending sources that can produce high-risk loans and contribute to China’s debt woes. This lending is at times done through smaller local and provincial banks that sell lightly regulated investments,” wrote ChinaPower. 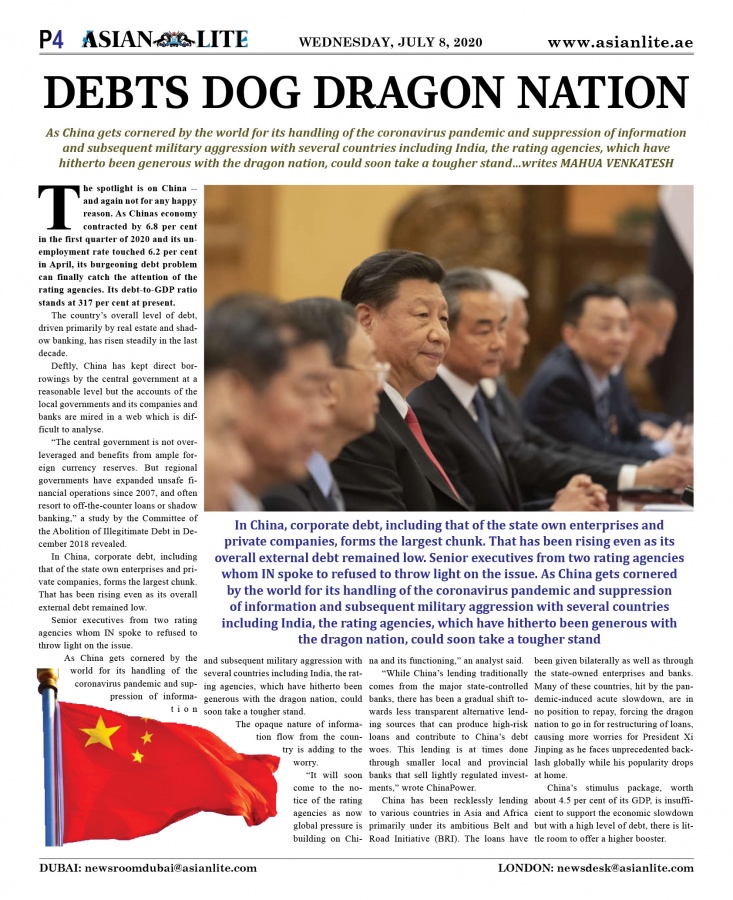 China has been recklessly lending to various countries in Asia and Africa primarily under its ambitious Belt and Road Initiative (BRI). The loans have been given bilaterally as well as through the state-owned enterprises and banks. Many of these countries, hit by the pandemic-induced acute slowdown, are in no position to repay, forcing the dragon nation to go in for restructuring of loans, causing more worries for President Xi Jinping as he faces unprecedented backlash globally while his popularity drops at home.

China’s stimulus package, worth about 4.5 per cent of its GDP, is insufficient to support the economic slowdown but with a high level of debt, there is little room to offer a higher booster.