Less than two weeks ago, UN experts said that they were “appalled by the enforced disappearance” of activist Idris Khattak, a leading human rights defender from Pakistan who went missing last year.

Professor Muhammad Sajjad Raja, chairman of National Equality Party and a leading political activist from Gilgit-Baltistan in Pakistan-occupied Kashmir, on Thursday slammed the Imran Khan-led government at the 44th Regular Session of the UN Human Rights Council in Geneva.

“The extra-judicial killings taking place in Pakistan Occupied Kashmir and Gilgit Baltistan are not acceptable… The citizens stand before you today seeking intervention from the repression and the extra judicial killings of our people. Azad means free but this is a false label, which has been attached to our people to hide the truth in a disgusting way. In fact, any dissent towards Pakistan is mercilessly crushed through by army atrocities and the ISI,” Raja said in a strongly-worded statement

On June 29, the UN human rights experts had condemned the widespread silencing of human rights defenders “through intimidation, secret detention, torture and enforced disappearance, whether with the direct involvement of the Pakistani government, or with its complicity or complacency.”

The statement mentioned Pakistan’s long history of enforced disappearances, many of which have targeted human rights and minority defenders critical of the government and the military, as well as persons suspected or accused of involvement in the opposition.

It isn’t the human rights activists alone who are being targeted by the Pakistani deep state.

A leaked internal memo issued by the Interior Ministry listing measures to stop the “rhetoric against Pakistan” and targeting journalists, particularly those living abroad, has once again highlighted the shocking agenda of the government.

The confidential memo dated June 18 accused six journalists — five Pakistanis and an Afghan citizen — alleged to be “involved in various activities in Europe and America which are seriously damaging Pakistan’s foreign interests abroad.”

It accused the journalists of “either participating in anti-Pakistan activities or producing anti-state content” for foreign media under pseudonyms. It added further: “You are requested to strictly follow movements and social media accounts.”

Paris-based independent NGO Reporters Without Borders (RSF) expressed “shock” at the contents of the leaked memo and warned that “the Pakistani authorities will be held responsible for anything that happens to these journalists or their families.”

“Let’s not be fooled, the Pakistani intelligence agencies could have leaked this document in an attempt to poison public opinion and intimidate the journalists it names,” said Daniel Bastard, the head of RSF’s Asia-Pacific desk. 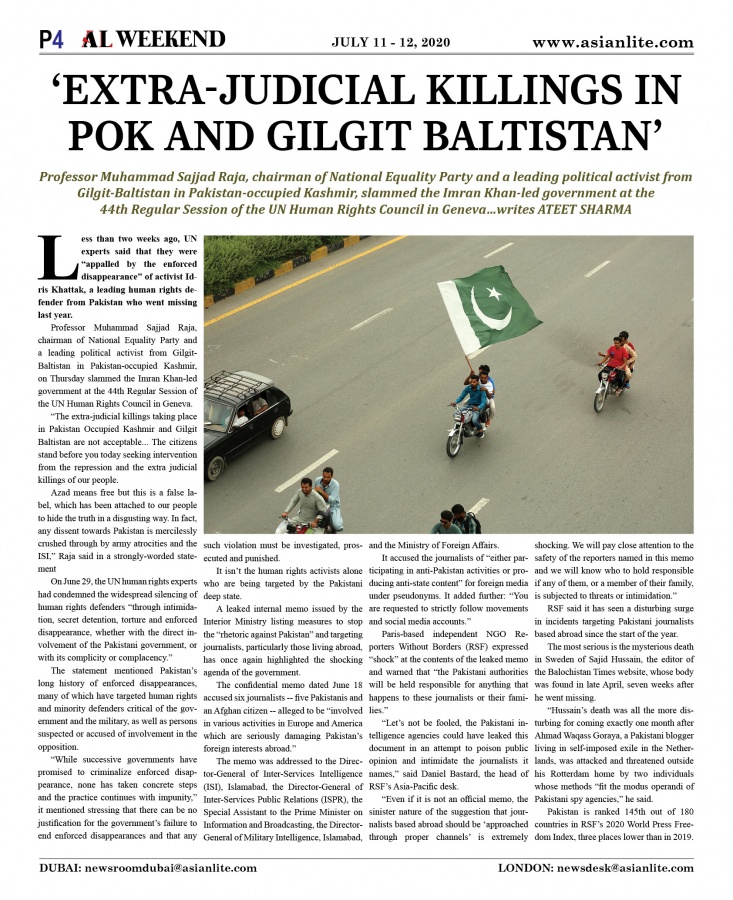 “Even if it is not an official memo, the sinister nature of the suggestion that journalists based abroad should be ‘approached through proper channels’ is extremely shocking. We will pay close attention to the safety of the reporters named in this memo and we will know who to hold responsible if any of them, or a member of their family, is subjected to threats or intimidation.”

RSF said it has seen a disturbing surge in incidents targeting Pakistani journalists based abroad since the start of the year. The most serious is the mysterious death in Sweden of Sajid Hussain, the editor of the Balochistan Times website, whose body was found in late April, seven weeks after he went missing.

“Hussain’s death was all the more disturbing for coming exactly one month after Ahmad Waqass Goraya, a Pakistani blogger living in self-imposed exile in the Netherlands, was attacked and threatened outside his Rotterdam home by two individuals whose methods “fit the modus operandi of Pakistani spy agencies,” he said.