While efforts are afoot to normalise Indo-China relations through military and diplomatic channels, the ground reality is far from normal. The Indian Government is reportedly looking into the Chinese investments entangled within the Indian Venture Capital ecosystem.

At a time when news of India’s solar manufacturing may get VGF support to cut Chinese imports or Union Minister Nitin Gadkari snubbing China on road construction deals are making headlines, some of India’s key projects are either being run by or have crucial links with companies that have deep connections with China’s People’s Liberation Army (PLA).

Sources close to the government said that one of the top projects is going on in Karnataka. Xindia Steels Ltd which is considered as one of the largest joint ventures between India and China has recently commissioned a 0.8 mtpa iron ore pelletisation facility in Karnataka’s Koppal district, adjacent to Hospet, at a total cost of slightly over Rs 250 crore.

However, its main investor is Xinxing Cathay International Group Co. Ltd. (China), which as per its website, is “reorganised, reconstructed and unhooked from the previous production department and subordinate enterprises and institutions of the General Logistics Department of the PLA”.

The same PLA, which engaged into a violent clash with the Indian Army soldiers in eastern Ladakh last month, resulting in the killing of 20 Indian bravehearts.

The company that powers the Hospet project is “under the supervision” of the State-owned Assets Supervision and Administration Commission of the State Council in China (SASAC).

And that is just the tip of the iceberg. There is another project in Andhra Pradesh which too raises security issues in view of the current scenario. China Electronics Technology Group Corporation (CETC) had announced a multi-million dollar investment in a 200 MW PV manufacturing facility in Andhra Pradesh’s Sri City in 2018.

Washington has long banned government agencies from buying Hikvision products. Several CETC research institutes and subsidiaries have been added to the US government’s list, restricting exports to them on national security grounds.

Huawei is being ostracised in many countries in key telecom projects. It was Ren Zhengfei, a former deputy director of the People’s Liberation Army engineering corps, who had founded Huawei in 1987 in Shenzhen.

Huawei is a popular brand in India with reported revenue of Rs 12,800 crore in 2018-19 from its Indian operations. But due to security concerns, the company has been kept out of the 5G race in many countries.

However, it is also developing Artificial Intelligence in a range of sub-domains for China under the military-civil fusion initiative. Alibaba, along with Baidu and Tencent, is a part of China’s national AI team.

The United States-China Economic and Security Review Commission, a Congressional commission of the US government that monitors and investigates national security and trade issues between the US and China, in its 2019 report said, “The Chinese government’s military-civil fusion policy aims to spur innovation and economic growth through an array of policies and other government-supported mechanisms, including venture capital (VC) funds, while leveraging the fruits of civilian innovation for China’s defence sector.”

This raises direct questions on Chinese VC investments in India, including big names like Alibaba and Tencent, sources close to the government said.

This also raises concerns over investments by Tencent. Its first notable investment was $400 million in Ola Cabs, which came at a time when both Ola in India and the Tencent-backed Didi Chuxing in China were in a heated competition with rival Uber.

This was followed by a $700 million investment in Flipkart, in a deal that made Tencent the biggest Chinese investor in India.

And that’s not all. Tencent has acquired a diversified portfolio in India, targeting stakes by leading a $175 million fund-raising round in Hike Messenger to a $90 million injection in the healthcare startup Practo. In the education space, it has invested $40 million in the learning app Byju’s, following up with $11.4 million in a subsequent funding round.

Even your regular food delivery apps have a Chinese grab that now raises national security concern for the Centre. Tencent joined its shareholder Naspers in a $1 billion funding round for Swiggy, a rival of Alibaba-invested Zomato.

Now, if the US report is anything to go by, China wants “leveraging the fruits of civilian innovation for China’s defence sector”, which at present is at odds with India, due to the border disputes, while the funds drive the economic growth.

India is scrutinising afresh the threat of a 2017 law that China’s legislature had passed. It’s known as a new intelligence law which gave new powers to monitor suspects, raid premises and seize vehicles and devices. 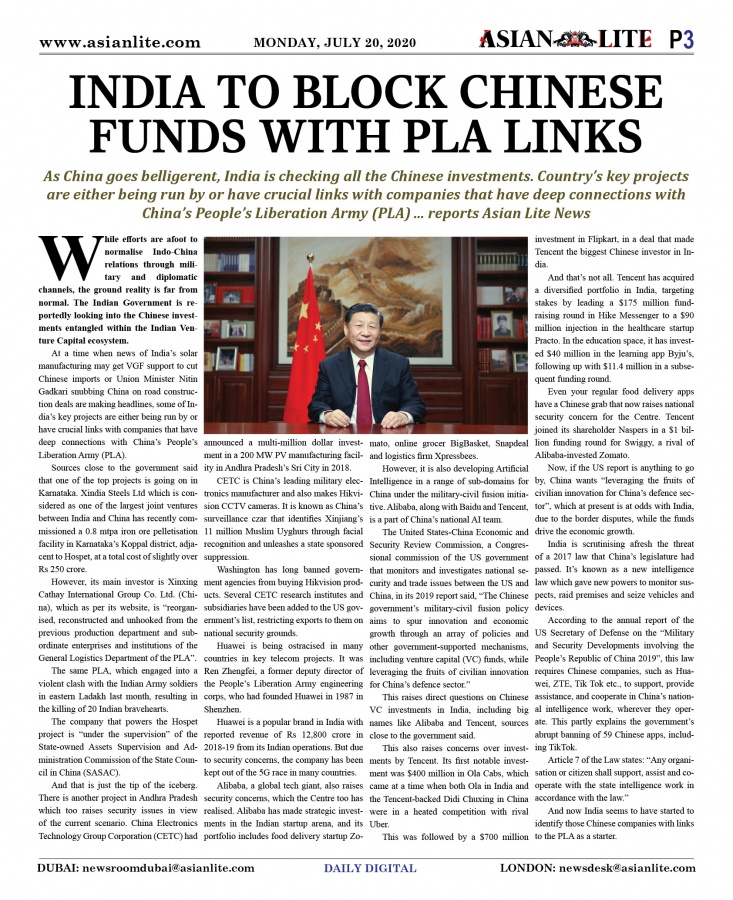 According to the annual report of the US Secretary of Defense on the “Military and Security Developments involving the People’s Republic of China 2019”, this law requires Chinese companies, such as Huawei, ZTE, Tik Tok etc., to support, provide assistance, and cooperate in China’s national intelligence work, wherever they operate. This partly explains the government’s abrupt banning of 59 Chinese apps, including TikTok.

Article 7 of the Law states: “Any organisation or citizen shall support, assist and cooperate with the state intelligence work in accordance with the law.”

And now India seems to have started to identify those Chinese companies with links to the PLA as a starter.