Indian Air Force chief R.K.S Bhadauria on Saturday said that India is not at war with China but the forces are well prepared and suitably deployed to respond to any contingency.

He was speaking at the Combined Graduation Parade at Air Force Academy, Dundigal here and later interacted with the media persons.

He said the developments at the Line of Actual Control in Ladakh are a small snapshot of what “we are required to handle at short notice”.

“In spite of unacceptable Chinese action after agreements reached after military talks and resultant loss of lives, all efforts are underway to ensure that the current situation at the LAC is resolved peacefully but it should be very clear that we are well prepared and suitably deployed to respond to any contingency,” he said.

“I assure the nation that we are determined to deliver and will never let the sacrifice of braves of Galwan go in vain,” the Air Chief Marshal added.

He confirmed that the IAF has made some deployments at Leh and other places and has taken necessary actions for any contingency.

“We fly whatever is required. It has happened whenever it was required. If we find unusual activity we check it out. We have air defence aircraft deployed but there has been no incursion from fighters,” he said when asked if IAF is flying combat air patrols at the Line of Actual Control (LAC).

He said the IAF was well aware of the situation and the deployment at the LAC and beyond and had taken all necessary actions.

“We are aware of the full situation, be it at LAC, be at deployments beyond LAC, be it all the air deployments, the posture and kind of deployments. We have done full analysis and have taken necessary actions that we need to take to handle any contingency that may come up with this kind of deployment,” said Bhadauria, who had the forward location bases in Leh and Srinagar after 20 Indian soldiers were killed in violent clashes with the Chinese troops in Galwan Valley in Ladakh on June 15.

“All actions have been taken. We have various options, various contingencies that can arise,” he added

Asked about the deployments by IAF at Leh, the Air Force chief said necessary deployments were made at Leh and other places.

“We have air bases all over. It is not that we will deploy only at Leh and activity at Leh is indicative of our capability or our overall posture and deployment. I will not go into what we have deployed. Be rest assured, we know the situation and we have taken the necessary actions that are required to be taken to handle the situation.”

To another query, he said it would be a good thing for India if the Chinese air bases are at higher altitude. “This is in general but I will not go into the tactical aspects of what is advantageous to them or us. Suffice is to say that we know where their airfields are, where they are deployed, what are their operational basis and whatever has been deployed, we need to factor in and we have done it”.

Bhadauria said every year Chinese troops used to deploy and exercise in the area but this time there was an increase in the activity. This activity at LAC started in May and the armed forced monitored the changes and acted accordingly.

“Where is the doubt? Don’t have any doubt. Have faith in your services. We will handle any contingency, all three services,” he quipped when asked if India is capable of putting up a fight against China.

The Air Chief said the number of aircrafts at Combined Graduation Parade was less this time due to COVID related precautions and clarified that it has nothing to do with the situation at LAC. “If the current situation is that difficult I would not have come here.”

He also did not agree that the newly commissioned officers will be proceeding straight to their units because of the current situation at LAC. “No, this is not an emergency situation. These are not the officers who get into cockpits to fight at the frontline. Obviously 100 number is a good number to have in the field also in terms of current situation. We are taking all our officers from our training institutes to the field to expedite their training on the next system they planned to be deployed so that they can become operational at the earliest.”

Earlier, during his address at the parade, he said the security scenario in the region mandates that “our armed forces remain prepared and vigilant all the time”. 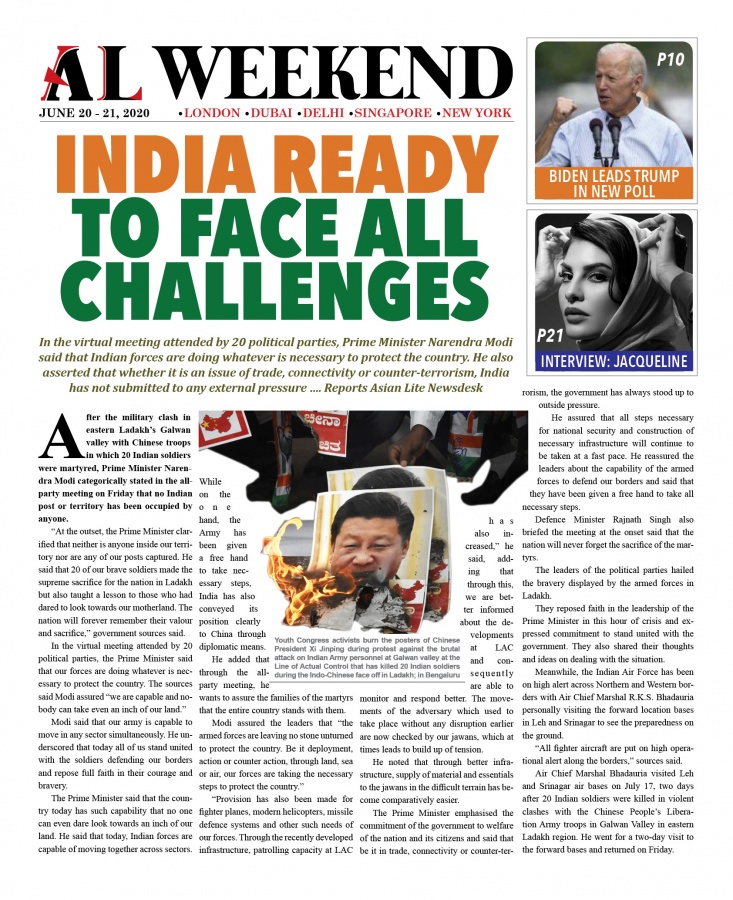 He paid tributes to Colonel Santosh Babu and his brave men who made supreme sacrifice while defending the LAC at the Galway Valley. “The gallant actions in highly challenging situation have demonstrated our resolve to protect the sovereignty of our country at any cost.”

Congratulating the 123 graduating officers on successful completion of their training, he said the newly commissioned IAF officers, instead of going home for a break, will be proceeding straight to their next units to shoulder their responsibilities for the task at hand.