From the very beginning of the Covid-19 epidemic, the World Health Organization (WHO) has acted as a sidekick of the Chinese state and this is only because the head of WHO Tedros Adhanom Ghebreyesus, is acting like a Chinese lackey. This raises important questions not only about China’s increasing influence over multilateral organizations, but creates complications for a world desperately trying to find a solution to the Covid-19 epidemic. Well, is it time to change the name of WHO to CHO, i.e., China Health Organization?

Tedros Adhanom Ghebreyesus, from Ethiopia may not be from China, but he is nonetheless a puppet of the regime. The Chinese Communist Party (CPC), the third largest financial contributor to the WHO, backed the Ethiopian’s electoral bid, has certainly gotten its money’s worth in the current Covid-19 crisis. Ghebreyesus, as WHO chief, is alleged to have delayed the world from knowing about the onset of the deadly disease in China, and even lauded China’s efforts in tackling the Chinese Virus. The WHO chief also allegedly gave China a clean chit when the ground reality was much different. Analysts believe that the WHO was late in raising an alarm around the world about the virus as it did not want to offend China!

Given the scale of this shielding of China by a international health body head, a petition demanding the resignation of WHO chief Ghebreyesus, had by March-end earned nearly a quarter of a million signatures, signalling a growing discontent against the man and the organisation he heads, the world over. Tedros met (January 2020) with President Xi in Beijing, where he lavished praise upon the Chinese leader for his “transparency” and handling of the Covid-19 crisis. He said: “We appreciate the seriousness with which China is taking this outbreak, especially the commitment from top leadership and the transparency they have demonstrated.” This statement came a month after the world became aware that China lied to the world that the virus could not spread from human to human and allowed over five million people to leave Wuhan to travel.

A month later, Tedros took on the United States and other nations for taking the sensible step of banning travel from China. He then made the ridiculous claim that there was “no reason for measures that unnecessarily interfere(d) with international travel and trade.” To top it all, Tedros lauded China for “making us safer,” while responding to a European journalist who asked if Beijing put “pressure” on the organization to give it such “effusive praise.”

Despite the world realizing by January 2020 that the Covid-19 would adversely affect the global economy and create a health security hazard, the WHO declined to declare it a pandemic till 11 March 2020. By this time, over a 100,000 cases had been declared positive worldwide. Tedros’ delay in declaring Covid-19 a Public Health Emergency of International Concern (PHEIC), is an unpardonable error of judgement. The WHO’s Emergency Committee was split (January 23, 2020) on whether to declare a PHEIC. With the Director General having the final say in the matter, Tedros chose to wait despite admitting that this was an emergency in China.

Worse still, the WHO continued to claim, falsely, that masks do not protect people from the coronavirus. Studies clearly indicate otherwise. Why on earth would the WHO make such an assertion, perhaps the explanation is that the organization wants to save more masks for China. China, for itself, has exported faulty masks to the rest of the world and thus hoarded its requirements and in some cases, taken stock from other countries. An instance of this kind of Chinese perfidy is seen in the so-called export of N-95 masks to Pakistan. On import and inspection, it turned out that these ‘masks’ were made from female underwear and were not the N-85 masks at all!

One scholar at the Council on Foreign Relations in the US has criticized the WHO chief for his role in tackling the disease and guarding China from where the virus had initially originated late last year. He says that Tedros was quick to criticize other countries for their response to the outbreak of the virus in sharp contrast to his effusive praise for China. Tedros called upon nations not to limit travel with China and warned against the ‘recrimination or politicization’ of the outbreak. More significantly, Chinese news coverage prominently features Tedros’ praise of President Xi Jinping and criticism of foreign governments.

History of WHO support to China

The WHO’s sycophancy of China predates the coronavirus. Beijing’s stranglehold over the organization began in 2006, when Margaret Chan, herself a Chinese national, took charge of the organization. At one point in time, Chan had praised the healthcare system of North Korea as the “envy” of “other developing countries”! Chan also allied the WHO, with President Bashar Assad, and declared that the Syrian leader was “a president who is working for his people and his country” just a few years before he was caught red-handed massacring his own people. Just before demitting office as Director General of WHO, Chan barred Taiwan, from the WHO’s annual assembly. The icing on the cake was Chan’s invitation to President Xi Jinping to visit the WHO HQ.

China’s assiduous cultivation of international organizations and their chiefs through money and other means was best illustrated when it supported the election of Tedros, as WHO Director General in 2017. Months before the election, Tedros was invited to speak at Peking University where he called for stronger cooperation between China and the Global South on health issues. This support paid off immediately as the day after his election, Tedros confirmed to Chinese state media that he and the WHO would continue to support the “One China” principle, which recognizes the government in Beijing as the legitimate Chinese government.

In 2019, the WHO authorized the inclusion of an entire chapter on traditional Chinese medicine in the latest version of the International Statistical Classification of Diseases and Related Health Problems. And in 2020, Tedros’ support of China’s response to COVID-19 shows that their early support for him has paid dividend. The National Interest, a US-based online publication which specialises on foreign policy, summarizes the situation aptly by stating: “Despite all evidence to the contrary, Chinese authorities are weaving a false counter-narrative in which China was actually the victim of a foreign virus that it quickly moved to contain. And the WHO is helping them do it.”

Little wonder then that China has now decided to declare that the epidemic over and want the world to believe that it has had ‘zero’ cases in the week starting March 31, 2020. There are twin reasons for doing this cover-up. One is to deflect international criticism over China’s handling of the crisis and second, is the domestic criticism of President Xi, however muted it may be. 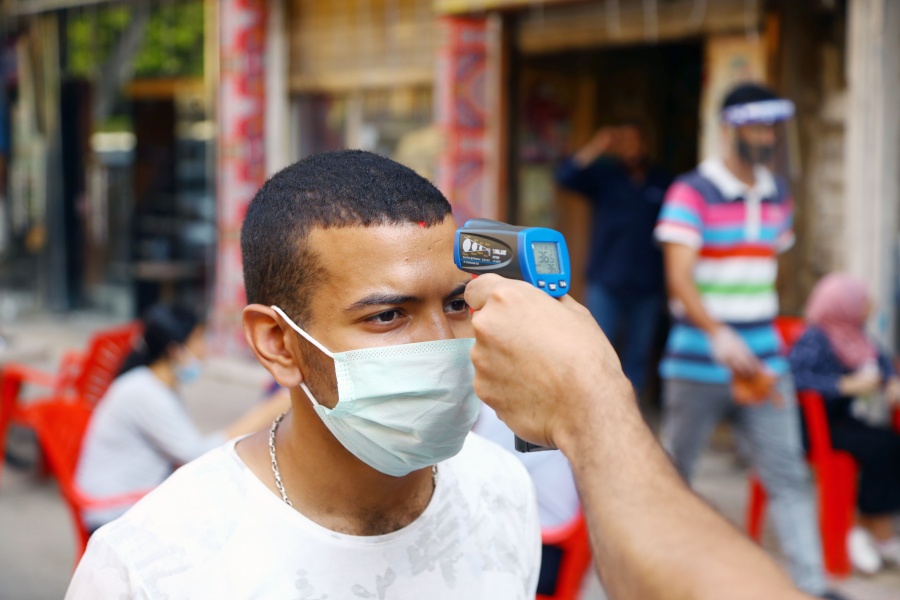 Reaching ‘zero’ is a matter of credibility for President Xi, who is being roundly criticized for his handling of the Covid-19. Xi has to show the world that the Communist Party of China has been able to defeat of the virus. Any revelations about the truth about Covid-19 inside China can be a embarrassment. Therefore, the Chinese state has resorted to censorship and used visa as a weapon to hide the reality about the Covid-19 outbreak. China has expelled reporters working for the Washington Post, The New York Times, and The Wall Street Journal. Censorship is not only for the media and journalists, but also for the general Chinese citizenary, who are obliged to remain silent about the health crisis they are facing.

It is the evidence presented by Chinese citizens on social media that tells us the reality of the COVID-19 outbreak and contradicts the official narrative. Stories on social media, censored or removed almost as soon as they appear, reveal how local governments cover up new cases and how hospitals are ordered to report new cases, as normal flu or pneumonia.

Despite China having thrown open Hubei province for business as usual, reports indicate that surrounding provinces are closing their borders to people from Hubei for the fear of another outbreak. One video shows a riot that occurred when Hubei police tried to open the border with Jiangxi, people and police in Jiangxi closed the border because they knew would be exposed to Hubei. 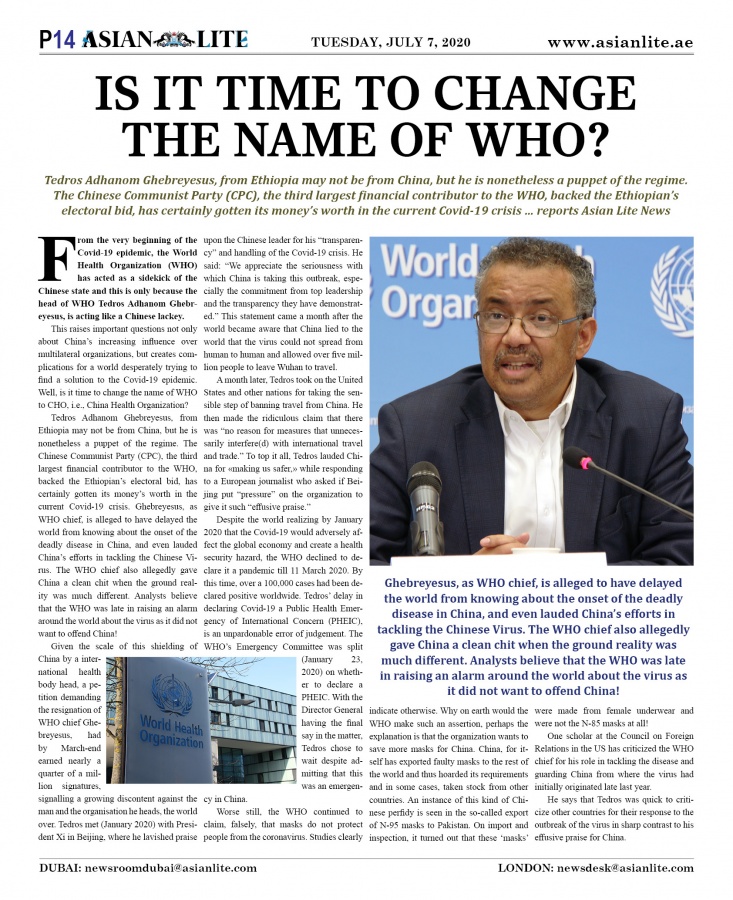 The Chinese government likes to boast about the number of people who have recovered from the virus, but independent media have reported that up to 14 per cent of those who have ‘recovered’ have tested positive again! The government also falsifies epidemiological statistics, by not counting cases in which tests indicate infection but people are asymptomatic. Significantly, censors almost immediately removed a photo from the Caixin website which showed a truck delivering 2,500 urns filled with the ashes of cremated people. Censors also removed an accompanying report that a truck had made another such delivery the same day.

In the past, the CPC’s restrictions on the free flow of information seemed to be a matter mainly concerning the freedom of the Chinese people, the Chinese government’s distortion of the truth has now became more than abstract problems for the international community. They have become a threat to global public health — indeed, matters of life and death.