Amid the COVID-19 pandemic and recent military face-off on the India-China border in Ladakh, intelligence agencies have warned the government of pro-Khalistan activities in the country backed by Pakistan’s ISI spy agency and the banned Sikhs for Justice (SFJ) group.

The warning, sources said, mentions that these anti-India activities are being guided by one ISI handler named Abdullah in close coordination with SFJ’s founder Avtar Singh Pannu– who is learnt to have been residing in the United Kingdom.

Abdullah’s name was also revealed during questioning of three arrested suspected sympathisers of the Khalistan Liberation Front (KLF), who were planning to execute targeted killings in various northern states. The KLF supporters were arrested by the Special Cell of Delhi Police in a week-long operation across Delhi, Punjab and Haryana.

The ISI and SFJ have been advocating secessionist and pro-Khalistan activities in India for long following which the Ministry of Home Affairs in July last year banned the SFJ for advocating Referendum 2020, an online campaign for Khalistan, which seeks a separate homeland for Sikhs.

It has been suggested in the warning, which was shared earlier this month, to keep the national capital on high alert ahead of Independence Day. Inputs were shared that KLF group has been tasked by ISI and SFJ for terrorist activity in the national capital, said the source.

As per the information, KLF group is in close proximity with Pakistani ISI handler Abdullah and Avtar Singh Pannu of SFJ. The KLF group has been tasked to lure youths to the organisation and has been assigned to indoctrinate youths at the behest of their bosses based in Pakistan, the sources said.

For funding, another source said, the ISI handlers asked the KLF to extort money from local businessmen to arrange locally made weapons and give momentum to the terror plan.

The source further claimed that Abdullah asked them to recruit fresh youth for training in terror camps in Pakistan and promised to provide them weapons like AK-47 assault rifles and sophisticated pistols for their module.

The KLF suspects arrested by the Delhi Police have also told police that they were asked by their handlers to get in touch with likeminded people for which they were asked to attend court hearings of arrested militants.

The group was also tasked to take help of social media sites like Facebook to upload incriminating videos with posters, photos and songs supporting Khalistan leaders and the Khalistan movement.

The information sends a clear message that ISI has opened two fronts — militancy in Jammu & Kashmir and Khalistan group in Punjab– to destabilise India.

It all began in 2018 and 2019 when ISI allowed the Sikh separatist SFJ to open its office in Pakistan and also to display the Referendum 2020 posters during Vaisakhi festival when a large number of Indian Sikh devotees had gathered in Pakistan to celebrate the festival.

Punjab DGP Dinkar Gupta last year had also coordinated with the central security agencies to tackle the threat triggered by 2020 Sikh Referendum clearly aimed at pushing the ISI agenda of dividing the Sikh community. The referendum is now learnt to have been postponed till 2022, however, the Khalistan movement is being backed on a regular basis, the source said. 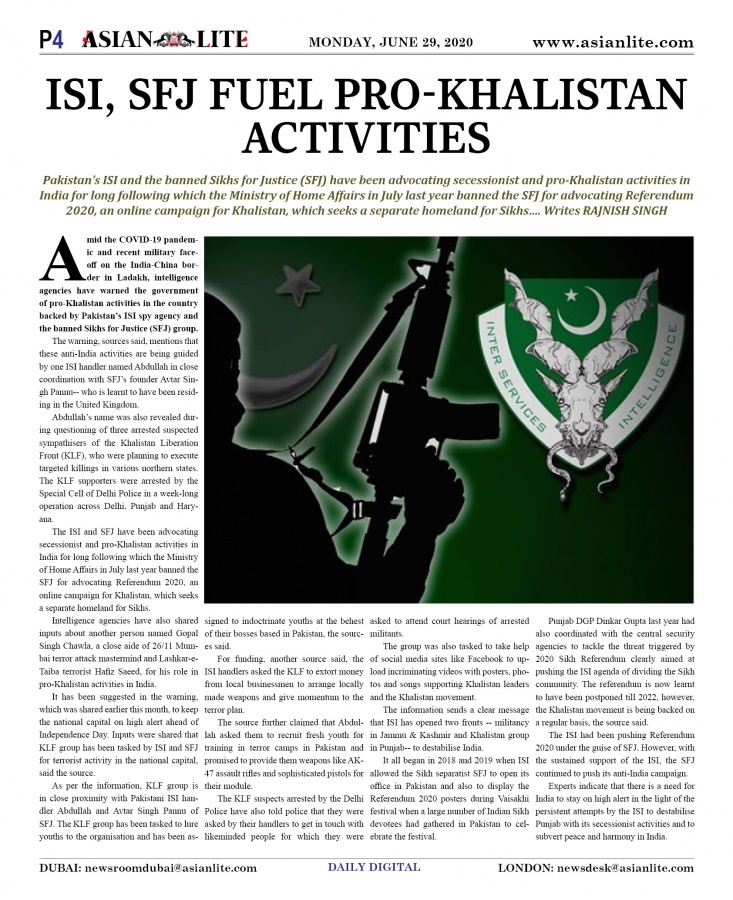 The ISI had been pushing Referendum 2020 under the guise of SFJ. However, with the sustained support of the ISI, the SFJ continued to push its anti-India campaign.

Experts indicate that there is a need for India to stay on high alert in the light of the persistent attempts by the ISI to destabilise Punjab with its secessionist activities and to subvert peace and harmony in India.