5 August 2020 marks one year of India’s decision to reorganise the State of Jammu & Kashmir, one of India’s 29 states, into two Union Territories – Jammu & Kashmir and Ladakh.  The primary purpose of constituting the UTs was to promote development, provide good governance and deliver socio-economic justice to the people of Jammu & Kashmir. Since then, over the last 12 months, a number of measures have been introduced and implemented to achieve these aims:

All central laws have been extended to the Union Territory of Jammu & Kashmir – including laws that provide social, economic, and political rights to women, children, under-privileged sections and ensure transparent and accountable governance – which had not been applicable to Jammu and Kashmir while the rest of India enjoyed the rights that these legislations gave them. Some examples: Right to Free and Compulsory Education Act, 2009; Juvenile Justice (Care and Protection of Children) Act, 2015; Protection of Women from Domestic Violence Act, 2005; Protection of Human Rights Act, 1994; Right to Information Act, 2005; Employment of Manual Scavengers and Construction of Dry Latrines (Prohibition) Act, 1993, etc.

Government of India has also brought to the people of Jammu and Kashmir new rights through repeal or amendments to more than 100 local laws some of which were outdated. For example, a law that provided for income tax of the Chief Minister to be paid from the State government’s funds was repealed.

Elections to block development councils (Tier-II of the Panchayati Raj – local self-government institutions) were held for the first time on 24 October 2019, which witnessed a voter turnout of over 98%. For the first time, women benefited from reservation of seats for women, and were able to thus enter mainstream politics.

The second phase of a unique participatory programme called ‘Back to Village’ programme was held in November 2019, wherein government officers reached out to every unit of local self-government – Panchayats – to inform them about development programs and receive feedback from the grassroots. Over 20,000 developmental works were identified through this exercise – of which about 7000 have been implemented.

Panchayats have been strengthened with funds and devolution of functions. Over GBP157.25 million (INR 15,000,000,000) has been transferred to Panchayats in the last year alone.

To strengthen grievance redressal, drop boxes have been placed in every Panchayat of Jammu & Kashmir to facilitate registration of complaints and grievances by citizens.

A unique market intervention scheme for Kashmiri apples was introduced which envisaged procurement of apples from 5 designated wholesale markets by National Agricultural Cooperative Marketing Federation of India (NAFED). Under this, over 15000 Metric tonnes of apples valued at over GBP 7.3 million (INR 700,000,000) were directly procured from growers in the Kashmir valley by end-January 2020 – and paid for directly to the apple growers themselves through Direct Benefit Transfer scheme (DBT).

Kashmiri saffron, which is the only saffron grown at an altitude of 1600-1800 M in the world, was given a Geographical Indication (GI) tag. India International Kashmir Saffron Trading Centre has been constructed at Pampore under the National Saffron Mission to facilitate collection, processing, packaging, e-auction of Kashmiri saffron.

Jammu & Kashmir government organized a first of its kind pre-summit meet of Global Investors’ Summit in New Delhi, inviting investments from across the world. This event showcased the policy and regulatory environment, and investment opportunities in 14 focus sectors to boost manufacturing and employment generation in the UT of J&K. Investment roadshows were also organized across Indian metropolitan cities, wherein, 168 MoUs worth GBP 1.43 billion (INR 136,000,000,000) were signed.

Responding to the local population, Government has restored reservation of all government jobs for residents of the Union Territory of Jammu and Kashmir.

In keeping with its promise of quick and transparent recruitment process, Government has advertised 10,000 posts for accelerated recruitment of youth in Jammu and Kashmir during the first phase – and 25,000 more jobs later – which are in the pipeline, giving special consideration to domicile, divorced women and orphan girls, and similar factors.

To boost employment opportunities and encourage entrepreneurship among technically qualified youth, two IT parks – one each in Jammu and Srinagar are to be established. 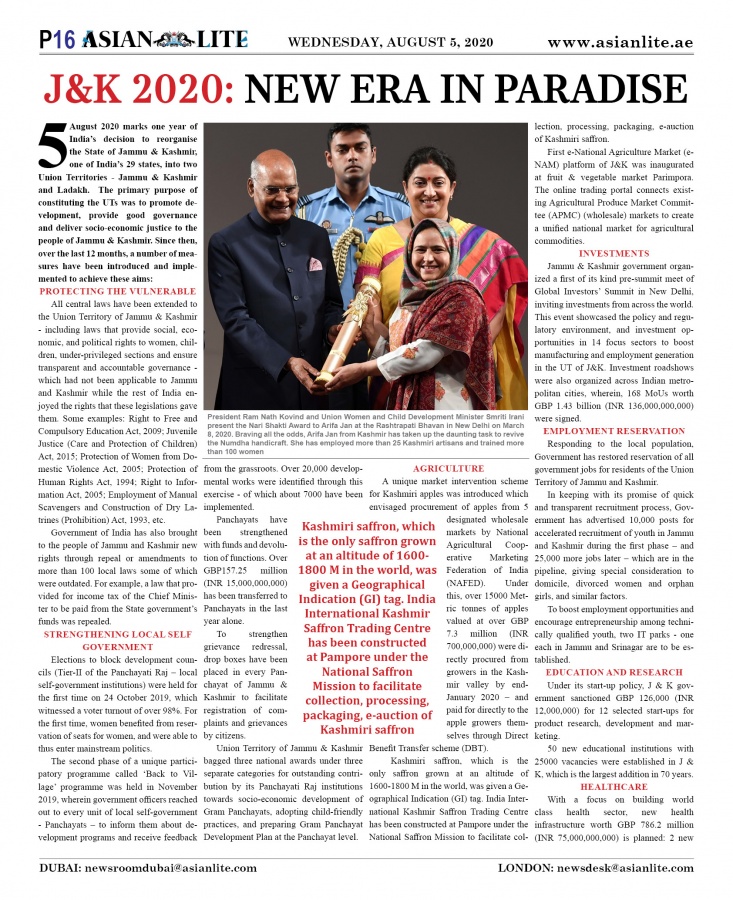 50 new educational institutions with 25000 vacancies were established in J & K, which is the largest addition in 70 years.

Over 500,000 students from Kashmir availed different scholarship schemes of the government in the past one year, which is nearly four times higher than that of the year before.

Under a unique, first of its kind internship initiative, Jammu & Kashmir government signed MoUs with four prestigious Indian Institutes of Technology (IITs) and three Indian Institutes of Science Education and Research (IISERs) to provide two-month internships for 500 final year students of J&K for the next academic session.

In a unique and unprecedented drive, 36 Union Ministers visited over 50 locations in Union Territory of Jammu & Kashmir, addressed public demands, and inaugurated over 200 projects.

Bottlenecks for projects spanning across various sectors under the Prime Minister’s Development Package (PMDP) have been removed – 17 of these projects have been completed or are nearing completion. 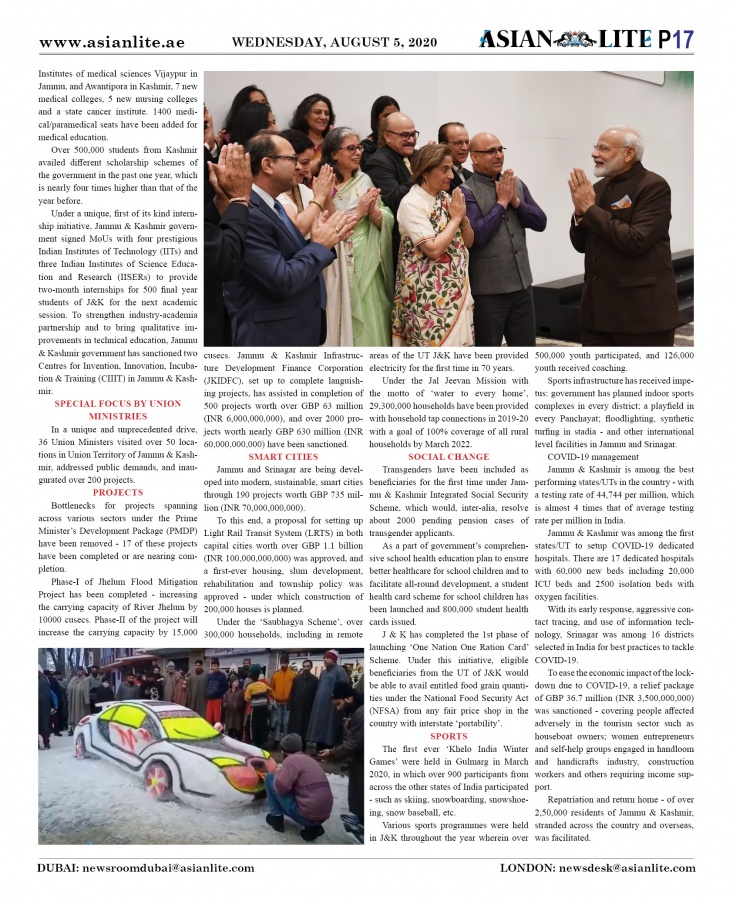 Jammu and Srinagar are being developed into modern, sustainable, smart cities through 190 projects worth GBP 735 million (INR 70,000,000,000). To this end, a proposal for setting up Light Rail Transit System (LRTS) in both capital cities worth over GBP 1.1 billion (INR 100,000,000,000) was approved, and a first-ever housing, slum development, rehabilitation and township policy was approved – under which construction of 200,000 houses is planned.

Under the ‘Saubhagya Scheme’, over 300,000 households, including in remote areas of the UT J&K have been provided electricity for the first time in 70 years.

Under the Jal Jeevan Mission with the motto of ‘water to every home’, 29,300,000 households have been provided with household tap connections in 2019-20 with a goal of 100% coverage of all rural households by March 2022.

Transgenders have been included as beneficiaries for the first time under Jammu & Kashmir Integrated Social Security Scheme, which would, inter-alia, resolve about 2000 pending pension cases of transgender applicants.

J & K has completed the 1st phase of launching ‘One Nation One Ration Card’ Scheme. Under this initiative, eligible beneficiaries from the UT of J&K would be able to avail entitled food grain quantities under the National Food Security Act (NFSA) from any fair price shop in the country with interstate ‘portability’.

The first ever ‘Khelo India Winter Games’ were held in Gulmarg in March 2020, in which over 900 participants from across the other states of India participated – such as skiing, snowboarding, snowshoeing, snow baseball, etc. Various sports programmes were held in J&K throughout the year wherein over 500,000 youth participated, and 126,000 youth received coaching. 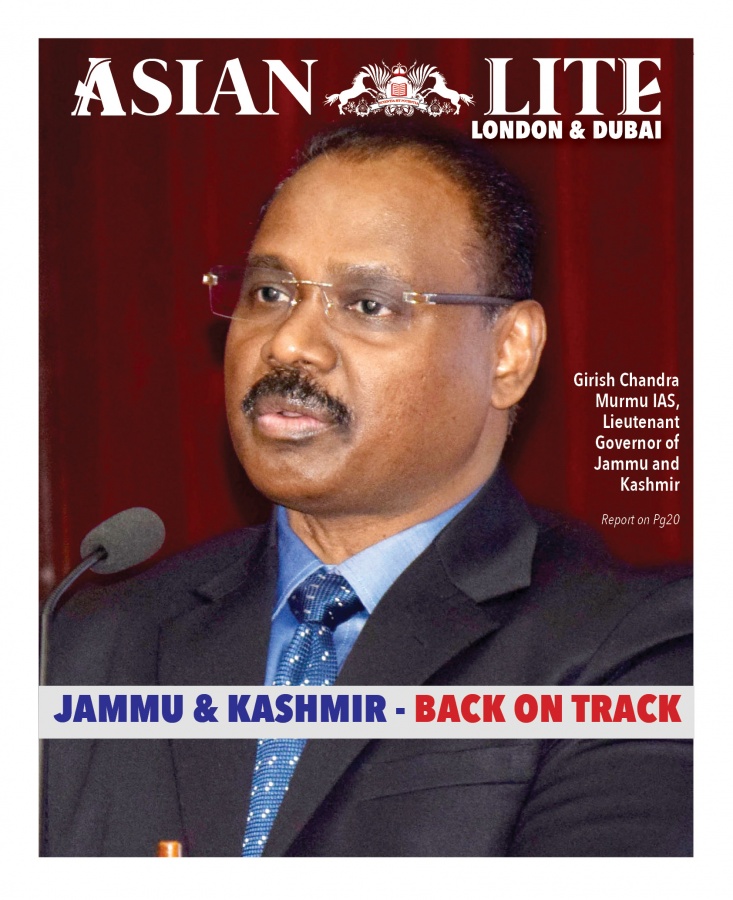 Sports infrastructure has received impetus: government has planned indoor sports complexes in every district; a playfield in every Panchayat; floodlighting, synthetic turfing in stadia – and other international level facilities in Jammu and Srinagar.

Jammu & Kashmir is among the best performing states/UTs in the country – with a testing rate of 44,744 per million, which is almost 4 times that of average testing rate per million in India.

With its early response, aggressive contact tracing, and use of information technology, Srinagar was among 16 districts selected in India for best practices to tackle COVID-19.

To ease the economic impact of the lockdown due to COVID-19, a relief package of GBP 36.7 million (INR 3,500,000,000) was sanctioned – covering people affected adversely in the tourism sector such as houseboat owners; women entrepreneurs and self-help groups engaged in handloom and handicrafts industry, construction workers and others requiring income support.

Repatriation and return home – of over 2,50,000 residents of Jammu & Kashmir, stranded across the country and overseas, was facilitated.