To ease the lives of people residing in Srinagar, the Jammu & Kashmir government has completed various infrastructure projects from 2013 to 2019, including a two-tube flyover from Jehangir Chowk to Rambagh in the city.

The work on the Rs 300 crore flyover, which has eased the traffic woes of the people started in 2013. The project to construct a length of 2.40 kms in four-lane with an aggregate length of four kms including accesses within a total cost of Rs 300.00 crores, was started in 2013. Benefitting an estimated population of four lakh Srinagarities, apart from the floating population from other districts, the project was finally thrown open to the public in August 2019.

Similarly, the revetment along Jhelum riverfront, which was started in 2015, with a total cost of Rs 358 crores, has been instrumental in mitigating the flood proneness of Srinagar city which usually has witnessed floods because of overflow over embankments.

Addressing urban population, the government completed a project for Rs 75.64 crores to solve the major issue of waterlogging in various areas of Srinagar. The project has been instrumental to provide relief to at least 21,000 households including commercial areas of Lal Chowk and Indra Nagar.

Meanwhile, for the development of sports infrastructure in the city, seven projects were undertaken with an estimated cost of Rs 10 crores. The infrastructure has been instrumental in the engagement of youth for sports activities.

In order to augment the higher education infrastructure, the government began 19 projects, with a cost of Rs 66.52 crores, in various degree colleges of Srinagar. Most of the projects have been completed. The aim of this project was to enhance the intake capacity of these colleges with special reference to professional courses.

The government also improved the connectivity network of Srinagar by completing the long-pending five bridges within the city. The cost of the project was around Rs 59.29 crores.

The project has been instrumental in addressing the connectivity problems of various areas. Twenty-five schools were taken to develop as model schools in Srinagar district to compete with private schools in the primary sector and to enhance the learning outcome in government schools. The project was started, completed and commissioned in 2019-20. The concept behind the project was to enhance the learning outcomes, increase the enrollment and decrease the dropout rates.

The government has given priority to establish quarantine centres to fight the Covid-19 pandemic. Presently, around 2,600 bed-capacity has been augmented at various locations such as Indoor Stadium, Hyderpora Warehouse, Sanat Nagar Marriage hall, IMPA Hostel, Hajj House, Srinagar and in eight hostels of the Government Degree College. This is aimed at easing out the admission of asymptomatic patients to government-run hospitals.

To augment the health infrastructure, major intervention such as increasing the bed capacity in various hospitals of Srinagar are among the projects worth Rs 281.27 crores which are presently going on.

In order to address the needs of students who come to Srinagar for studies from far-flung areas, a need was identified to establish libraries in various hostels of Degree colleges of Srinagar so that the students residing in hostels have 24×7 accessibility to books. Eight college hostels were provided along with PCs with National Book Library Software uploaded. 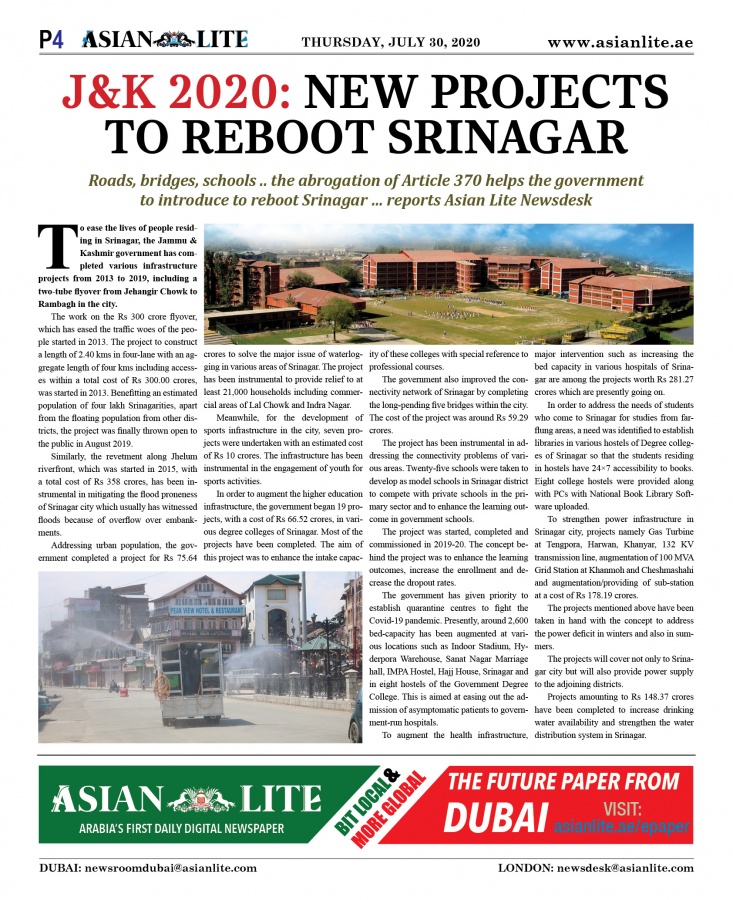 To strengthen power infrastructure in Srinagar city, projects namely Gas Turbine at Tengpora, Harwan, Khanyar, 132 KV transmission line, augmentation of 100 MVA Grid Station at Khanmoh and Cheshmashahi and augmentation/providing of sub-station at a cost of Rs 178.19 crores. The projects mentioned above have been taken in hand with the concept to address the power deficit in winters and also in summers.

The projects will cover not only to Srinagar city but will also provide power supply to the adjoining districts.

Projects amounting to Rs 148.37 crores have been completed to increase drinking water availability and strengthen the water distribution system in Srinagar.