Violent incidents of stone pelting and protest were on wane in Jammu and Kashmir since the abrogation of Article 370 on August 5, 2019.

Stone pelting by a section of Kashmiri youth on security forces, deployed for crowd control, was a common factor in the post abrogation era. The deadly attacks became a routine form of protest in the streets of Srinagar. There were 2,653 incidents of stone-throwing in 2016. A probe by the National Investigating Agency in 2017 revealed that Pakistan routed money into the Kashmir Valley to be paid to stone-pelters. Young men were paid Rs 500 each for throwing stones on Army and other defence forces.

“As Pakistan has failed four times in direct wars, so they are investing in such means, whether its hawala money or fake money through these leaders who claim to be the representatives of Kashmiris. But in actual they are traitors using Kashmiri people. The young boys are given Rs 500 to pelt stones,” said Nirmal Singh, the then deputy chief minister of the erstwhile state of Jammu and Kashmir in 2017. But now that seems a thing of the past.

“After August 5 last year, Kashmir has starting treading towards a new path. Kashmir which was affected by terrorism, will now emerge as a model in the near future. In the past, protest calendars were distributed among the locals for organising strikes. Now, they know that there is transparency in the system and accountability. It is among the big positive changes in the region,” explains Altaf Thakur, a Sarpanch from Pulwama.

Stone-pelting didn’t differentiate between security forces and residents of the Kashmir Valley. In October 2018, an army soldier was killed after sustaining head injuries during stone-pelting in Anantnag. Hundreds of army men and civilians were injured as stone-throwing went violent over the years. However, priorities are changing now- it’s tools over stones.

“Since I was born, I have been witnessing protests and strikes. There was no strike call after the abrogation of Article 370. We have witnessed no incidents of stone-pelting. The change is in front of us. Now everybody is living in peace. Now people are placing other demands for development and industries. Now the people of Jammu and Kashmir want the investment in the region,” says Tariq Bhat, a local journalist.

In January this year, Army Chief General Manoj Mukund Naravane said that since the law and order situation improved in Jammu and Kashmir since Article 370 was scrapped last year. 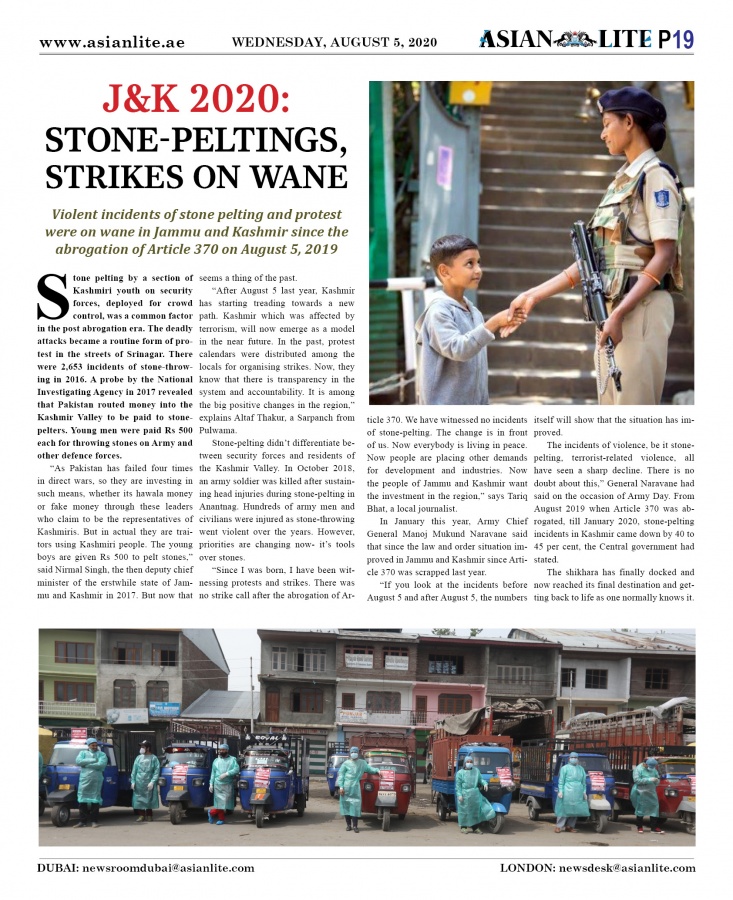 “If you look at the incidents before August 5 and after August 5, the numbers itself will show that the situation has improved. The incidents of violence, be it stone-pelting, terrorist-related violence, all have seen a sharp decline. There is no doubt about this,” General Naravane had said on the occasion of Army Day.

From August 2019 when Article 370 was abrogated, till January 2020, stone-pelting incidents in Kashmir came down by 40 to 45 per cent, the Central government had stated.

The shikhara has finally docked and now reached its final destination and getting back to life as one normally knows it.