Prime Minister Narendra Modi in his 16-minute address to the nation on Tuesday expressed concern over rising negligence of the coronavirus risk and said rules should be followed with the same seriousness as during the lockdown.

In his sixth address to the nation, the Prime Minister said, “irresponsible and negligent” behaviour had been on the rise during ‘Unlock 1’.

Earlier, Modi said, people were more careful about use of mask, washing hands for more than 20 seconds several times during the day and maintaining ‘do gazdoori’. “Regulations need to be followed with the same seriousness as during lockdown, especially in the containment zones,” Modi said.

The Prime Minister said the ‘Unlock 2’ coincided with the weather which caused several ailments.

Asking people to take care of their health, Modi said due to timely decisions, like lockdown, lakhs of lives could be saved and the death rate in the country was amongst the lowest in the world.

Modi exhorted people to spread awareness amongst those not following such rules and regulations.

Citing example of the Prime Minister of a country being fined Rs 13,000 for not wearing mask in public, he said local administration in India should act with the same alacrity, since no one, including the Prime Minister, was above the rule of law.

The Prime Minister addressed the nation a day after the government announced ‘Unlock 2’ as the country headed to a scarier phase of coronavirus. The number of Covid-19 cases has increased to 5,66,840 and the number of fatalities inching to the 17,000-mark.

PM Narendra Modi on Thursday made two big announcements during his address to the nation — extension of the current free ration scheme for 80 crore Indians for another five months till the festive season gets over in November, besides announcing the ‘One India, One ration Card’ scheme.

Hiniting that it is a long haul and India’s poor and needy will continue to need the handholding of the government, the Prime Minister declared that the ‘Pradhan Mantri Garib Kalyan Anna Yojna’ (PMGKAY) has been extended by another five months. It is a programme through which 80 crore Indians get free monthly ration.

The Prime Minister said the scheme, which will provide 5 kg wheat or rice to every needy family with an addition of 1 kg chana every month, will cost the government Rs 90,000 crore. The total cost of the scheme, including the amount spent so far, has cost the Centre an estimated Rs 1.5 lakh crore.

“During festivals, our needs also increase and so do the expenses. Keeping all these things in mind, it has been decided that the Pradhan Mantri Garib Kalyan Anna Yojana will now be extended till Diwali and Chhath Puja, which is by the end of November,” Modi said.

The Prime Minister credited the farmers and the honest taxpayers for making the mammoth scheme possible.

“Today, if the government is being able to provide free food grains to the poor and the needy, the credit goes to two sections. Firstly, the hardworking farmers of India, and secondly, the honest taxpayers. I thank you all from the bottom of my heart,” said the Prime Minister.

The Prime Minister also made two things very clear — “India will see more economic activities in the coming days, but Indians have no room to be complacent about the coronavirus”.

His statement assumes significance given that many have lowered their guard in the battle against the pandemic in recent times. The Prime Minister has asked the government and the concerned administrations to more stringently ensure that those violating the basic rules like wearing masks or maintaining social distancing desist from repeating their mistake.

“Ever since Unlock 1.0 started in the country, negligence in personal and social behaviour has been increasing,” the Prime Minister said.

Asking the administration to pay special attention to the contentment zones, he said, “During the lockdown, rules were strictly abided by. But now, the state governments, the local administrations and the citizens will have to again show similar caution. We need to pay special attention to the containment zones. If you see someone flouting norms, tell them they cannot do so.” 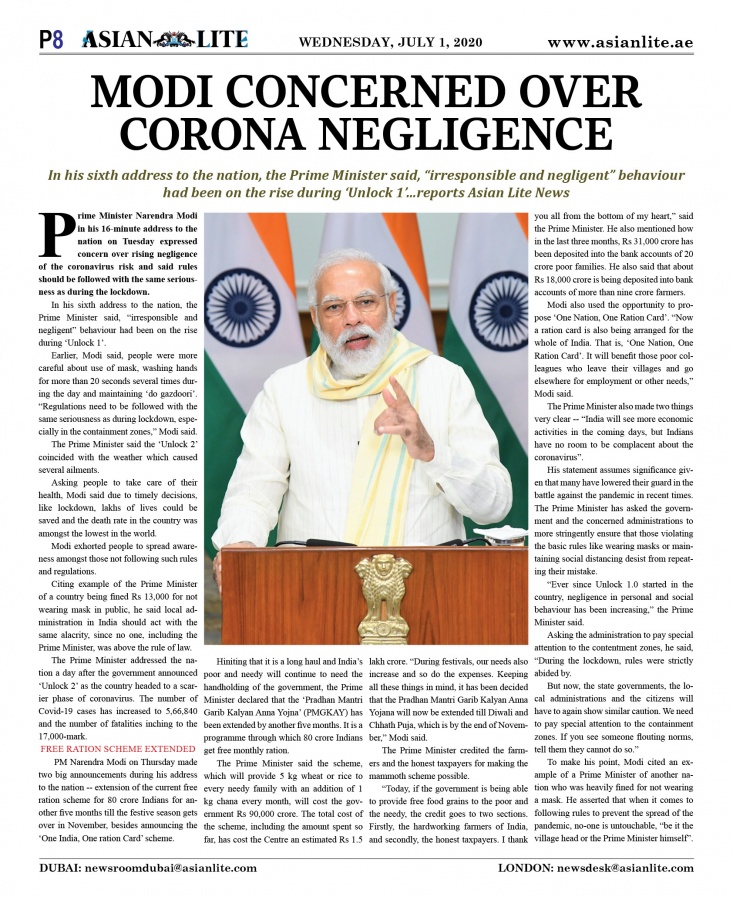 To make his point, Modi cited an example of a Prime Minister of another nation who was heavily fined for not wearing a mask. He asserted that when it comes to following rules to prevent the spread of the pandemic, no-one is untouchable, “be it the village head or the Prime Minister himself”.