Frenetic political activity has begun in Kashmir Valley and in Delhi with a select set of people who are likely to be appointed to an Advisory Council to helm affairs in the Union Territory being systematically sounded out.

The dialogue is all encompassing and it appears that the newly formed J&K Apni Party boss Syed Altaf Bukhari will head the council. Many names are in circulation, but they have been narrowed down to Usman Majid, Vijay Bakaya, Sunil Sharma, Sunil Sethi and Chowdhary Zulfikar Ali being sworn in as early as late June.

Can the head of the Advisory Council, which is virtually a Cabinet, have a Chief Minister or a different nomenclature, and can this be done without elections in the UT is the big question in the political circles.

The J&K UT is modelled on Puducherry UT. In the context of the likely developments in J&K, as a Former Secretary General of the Lok Sabha, P.D.T. Acharya said: “The advisory council in an UT helps the LG in the day-to-day administration. The real power is vested in the LG. The head of the advisory council cannot get the power of the CM. The advisory council also cannot make laws. The Constitution allows the President to administer UT through LG, but only the Parliament has the power to make law.”

Further, he insisted that the head of the advisory council cannot get powers of CM, as the latter has come to power through an election.

Acharya averred that in J&K, there is no Assembly at the moment. If the Delhi model has to be implemented in J&K, then the Parliament has to make the law. The Parliament has to make a law to have Assembly elections in UT. Delhi till 1992 used to first have a Metropolitan Council followed by an Executive Council; it was in December 1993 that after a hiatus of 37 years, Madan Lal Khurana of the BJP became the CM.

While as many as 10 to 12 members will be part of the council, its role may well be that of a Cabinet. Ex-Congress MLA from Bandipora and former Minister for Planning and Development (MOS) in the state government, Usman Majid, is reportedly a shoo in. He like many others came on board the new regional party with the hope that statehood will be restored. This appears to be part of a larger deal with the Centre that once the advisory council takes over the functioning of the UT, at an appropriate time the UT will be granted statehood once again. In fact, this is part of a larger deal with the state’s political class.

Similarly, former Member of Legislative Council (MLC) and senior National Conference (NC) leader, Vijay Bakaya, who had resigned from the party in March to join Bukhari’s pro-Centre party, is someone who is being considered.

Bakaya, an IAS officer, is a former state Chief Secretary and represents the Kashmiri Pandit community in Kashmiri politics. 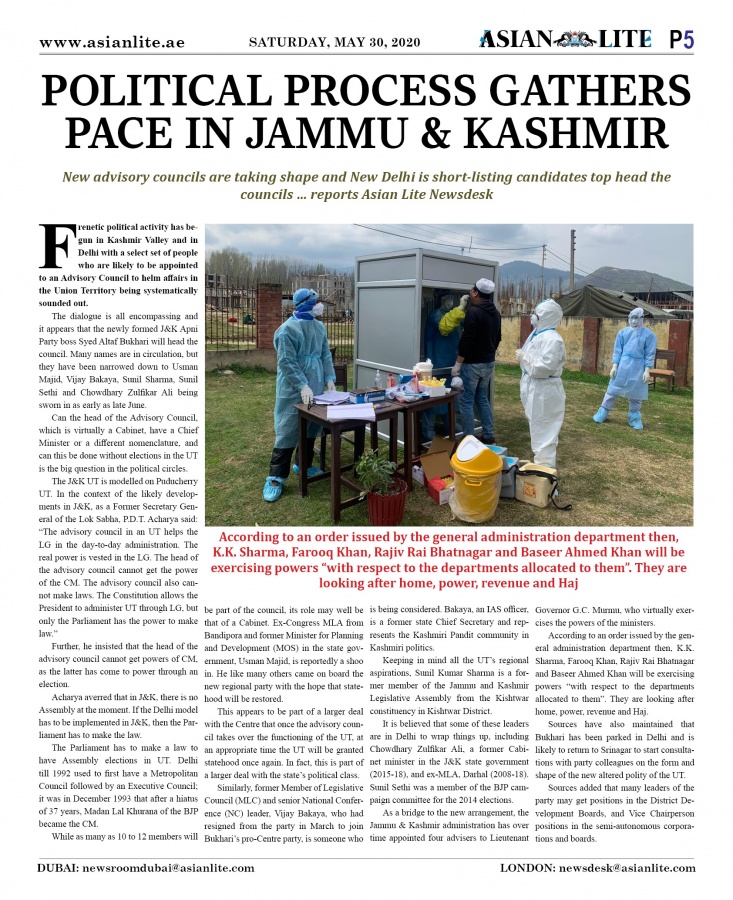 Keeping in mind all the UT’s regional aspirations, Sunil Kumar Sharma is a former member of the Jammu and Kashmir Legislative Assembly from the Kishtwar constituency in Kishtwar District.

It is believed that some of these leaders are in Delhi to wrap things up, including Chowdhary Zulfikar Ali, a former Cabinet minister in the J&K state government (2015-18), and ex-MLA, Darhal (2008-18). Sunil Sethi was a member of the BJP campaign committee for the 2014 elections.

As a bridge to the new arrangement, the Jammu & Kashmir administration has over time appointed four advisers to Lieutenant Governor G.C. Murmu, who virtually exercises the powers of the ministers.

According to an order issued by the general administration department then, K.K. Sharma, Farooq Khan, Rajiv Rai Bhatnagar and Baseer Ahmed Khan will be exercising powers “with respect to the departments allocated to them”. They are looking after home, power, revenue and Haj.

Sources have also maintained that Bukhari has been parked in Delhi and is likely to return to Srinagar to start consultations with party colleagues on the form and shape of the new altered polity of the UT.