A senior Congress leader wishing not to be named said: “The fight between the young and the old guard was quiet clear in the Congress for long.”…reports Anand Singh from New Delhi 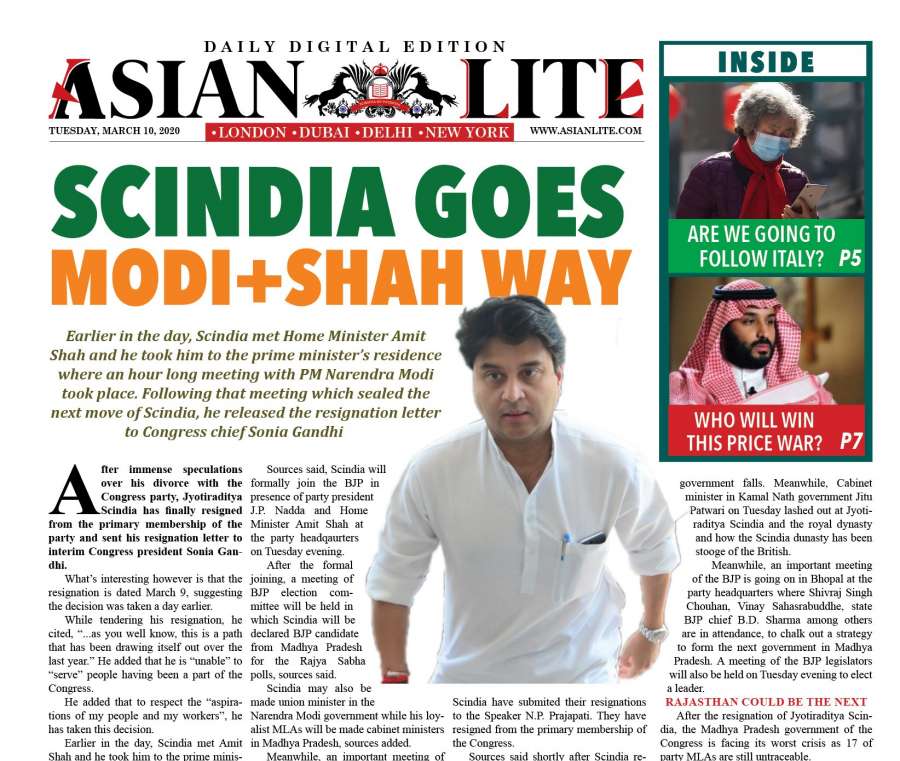 The resignation of the Gwalior royal Jyotiraditya Scindia from the Congress on Monday has brought to the fore the fight between the old and the young guard looking for survival in the party and also a “battle of identity”.

Scindia resigned from the Congress after 18 years on Monday after meeting Prime Minister Narendra Modi along with Union Home Minister Amit Shah on the 75th birth anniversary of his father and veteran Congress leader Madhavrao Scindia.

In his resignation, he complained about being sidelined in the party for the last one year.

“…as you well know, this is a path that has been drawing itself out over the last year,” he wrote, adding that he is “unable” to “serve” people having been a part of the Congress and his decision to quit he party is to respect the “aspirations of my people and my workers”.

Earlier in the day, Scindia met Amit Shah and they then went to the Prime Minister’s residence where an hour long meeting with Narendra Modi took place. Following that meeting which sealed the next move of Scindia, he released the letter to Congress’ interim President Sonia Gandhi ahead of likely induction into the the BJP on Tuesday itself.

A senior Congress leader wishing not to be named said: “The fight between the young and the old guard was quite clear in the Congress for long.”

He said that with Sonia Gandhi’s return to the helm of the party helped the old guard to attain more power and sideline the young leaders.

“With the selection of Kamal Nath in Madhya Pradesh and Ashok Gehlot in Rajasthan, the young leaders felt sidelined,” he said.

Another senior party functionary said that Scindia switiching sides clearly shows the “battle of identity” in the party.

He said after the debacle in Lok Sabha elections, the old guards always neglected the young leaders. “After Rahul Gandhi’s resignation, most of the young leaders were either sidelined or neglected. And month after month it became tough for Scindia to face the neglect in the party,” he said.

He claimed that Scindia’s praise for revoking Articles 370 and 35A from Jammu and Kashmir, and supporting the government was precursor to what was going in his mind. And even Scindia’s warning of hitting the streets if the state government failed to implement the manifesto promises and reply from the Chief Minister put the final nail in the coffin.”

Meanwhile, a senior BJP functionary related to the development revealed that the plan to bring Scindia in the BJP fold was going on for last three months.

The BJP leader said, “The way in which he was sidelined in the party in the state, made us clear that Scindia was looking to search for his lost identity.”

He said after he lost Lok Sabha polls from his home turf, Scindia did not stay away from the people and always kept visiting his parliamentary constituency.

“And the reply by Kamal Nath to Scindia over implementing the manifesto promises, irked him the most,” he said.

The BJP leader said that Scindia has been offered a Rajya Sabha berth and also a Ministerial berth in the Central government.