Amid the border tension with China in eastern Ladakh, designated terrorist outfit and pro-Khalistan group Sikhs For Justice (SFJ) has started targeting soldiers of the Sikh community in the Indian Army, threatening them to desert the force, intelligence agencies warned on Monday.

The agencies have alerted the armed forces and security establishments about the terrorist outfit’s nefarious activities.

Pakistani ISI has been backing the malicious campaign launched by the SFJ.

The US-based proscribed outfit Sikhs for Justice (SFJ) is instigating Sikh defence personnel in the backdrop of the recent martyrdom of four Sikh soldiers in Ladakh sector during the recent clashes with Chinese troops at Line of Actual Control.

The agency found that propaganda voice calls from an organisation named Sikhs For Justice (SFJ) campaign are making the rounds on social media. “The call is a pre recorded one with the fwd number being+1 (617) 390-7018, likely to be belonging to Massachusetts, North America,” the agencies stated.

The outfit members in the call are “motivating Sikh Indian soldiers not to get martyred for India”. They are inciting people by saying that India has a history of “not supporting Sikh people that is why they should leave Indian Army”.

As per the message, Sikh people are being asked to join the ‘Sikhs For Justice’ campaign wherein on joining they will get Rs 5,000 more than their present salary in Indian Army.

It was found that Gurpatwant Singh Pannun, chief protagonist of ‘Sikhs for Justice’, has uploaded a highly provocative video (duration 138 seconds) on June 18 instigating the Sikh soldiers of Indian Army to desert and join his secessionist outfit.

A similar audio message (115 seconds) of Pannun directly instigating the Sikh soldiers, was also sent to Global System for Mobile Communications (GSM) subscribers, in Punjab and nearby areas through the international telemarketing numbers the same day. The message was later also disseminated through social media.

Pannun, in the video, has falsely claimed that only Sikh soldiers were killed in the conflict and has accused India of using Sikhs in the Army as ‘watchmen’.

“Pannun has also claimed that though the theatre of conflict was ‘Kashmir’ but the ‘sacrifice’ was made by Sikhs. He also stated that SFJ would pay salary plus Rs 5,000 to the Sikh soldiers deserting Indian Army.

In the audio message, Pannun has instigated the Sikh soldiers not to sacrifice their lives as ‘India had twice attacked Akal Takht’, the agencies stated.

Earlier, on June 17, Pannun forwarded a letter addressed to Chinese President (disseminated through social media), that accused India of being a ‘violent aggressor’ in the current border tension with China and reiterated his intention to send a delegation to Beijing in August this year soliciting support for ‘Referendum 2020′.

After failing to carry out any activity on ground in Punjab on the 36th anniversary (June 6) of Operation Blue Star, the outfit was forced to postpone the commencement of so-called ‘voters registration for Referendum 2020′ in Punjab on July 4.

The outfit has fabricated another fake narrative that the Akal Takht was first ‘attacked’ by the security forces on July 4, 1955 during the agitation for ‘Punjabi Suba’.

In the meanwhile, the outfit also attempted to exploit the controversial remarks on June 6 of Giani Harpreet Singh, Jathedar of Akal Takht, on Khalistan, however, its propaganda could not gain any traction.

Earlier, another inflammatory message was in circulation demanding greater ‘power of making independent decisions’ to Sikhs and the release of all incarcerated Sikh militants.
Another seditious message, again in circulation on WhatsApp, claimed that Pakistan and China have no rivalry with Sikhs and it is India which is the ‘enemy of the Sikhs’.

Similarly, UK based pro-Khalistan element Ravi Inder Singh, who runs the so-called charity ‘Khalsa Aid’, also posted a cryptic message –‘Sons of Punjab have not been born to die for those who do not consider Sikhism as different religion’, on Twitter. 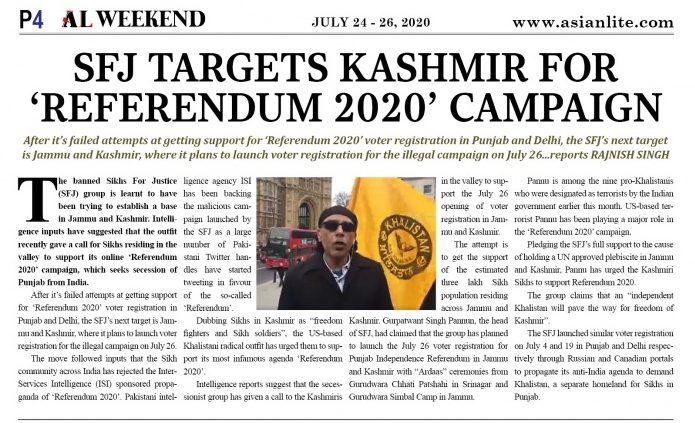 Punjab Police on June 18 had booked Gurpatwant Singh Pannun, of ‘Sikhs For Justice’ for sedition, unlawful activities and enticing Punjab youth for ‘Referendum 2020′ and attempts to spread dissatisfaction among the Indian armed forces.