As Taliban regains strength in the certain districts of Afghanistan, an increasing number of militants are being lured by Pakistan Army’s Special Service Group (SSG) to train and plot attacks in Kashmir, top security officials disclosed.

The latest intelligence input received from Jalalabad, the capital of Afghanistan’s Nangarhar province, revealed that a group of 20 Taliban militants are being groomed for missions in Kashmir by the SSG.

Pakistan is known for harbouring Taliban militants, and even during the rise of Al Qaeda, it provided logistical support to the banned terrorist organisation.

Al Qaeda has built terror camps in Jalalabad with the active support of Pakistan Army and the Inter-Services Intelligence (ISI), its notorious intelligence agency.

Among a series of intelligence inputs analysed by security officials on imminent terror attacks, the report from Jalalabad is more worrisome for anti-terror agencies in the country because Pakistan, for a very long time, has been courting the Taliban to launch battled-hardened militants in Kashmir.

“The main threat is the suicide squad of Taliban which Pakistan is said to be training for terror strikes in Kashmir. Intelligence inputs have suggested that Pakistan is likely to launch them after Eid. The ISI is also involved, because it’s impossible for these terrorists to cross over without the active support from Pakistan state actors,” a top security official said.

Another specific threat, about which the intelligence agencies have alerted the security establishments, is that a group terrorists is likely to carry out four to five improvised explosive device (IED) attacks in Sopore, most likely at Road Town Hall, fruit mandi, Kupwara bypass, Baramulla highway, Road MRF Chowk-Saidpura, toll collection point on the road to village Mazbug near the fruit mandi and the Baramulla-Handwara road.

The agencies also flagged that another group of terrorists is planning to carry out a vehicle-based IED or suicide attack along the stretch near Pantha Chowk in Srinagar.

“Another set of terrorists is planning to make an attempt of weapon snatching at Bijhbehara in Anantnag,” the intelligence agencies pointed out.

The agencies also stated that three unidentified terrorists are likely to carry out attacks on Jammu and Kashmir Police in Yaripora, Kulgam and Qazigund.

In addition to it, the agencies said, Pakistan is trying to push terrorists across the Line of Control (LoC).

According to the intelligence agencies, two groups of unidentified terrorists, concentrated at the Pakistan Post and Sardari, opposite Gurez Sector, are planning infiltration into India.

The agencies also pointed out that unidentified terrorists led by Jaish-e-Mohammed are concentrated at Kel and Tejian, which is opposite Machhal Sector, and are planning infiltration.

Meanwhile, on Wednesday night, a major terror attack was averted when the police in Jammu and Kashmir’s Pulwama intercepted a vehicle with 30 kg explosives in it.

The local police got tipped off on Wednesday night about a terrorist moving around with an explosives laden car, ready to blast at some location. The police then sent out search parties which intercepted the vehicle, a Santro. When traced, a few rounds were fired before the owners of the vehicle abandoned it and escaped. 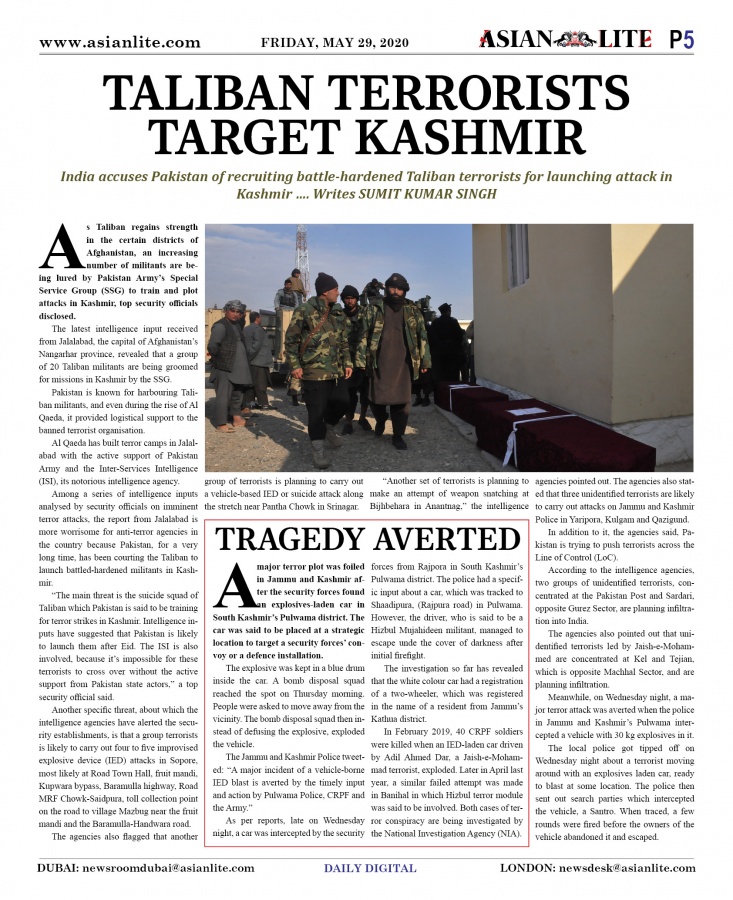