The problem is Pakistan has not much steam left to pull off the dangerous gamble the Generals are bent upon playing. The Generals are blind to the writings on the wall. They have already dragged the country to a possible economic ruin.

Pakistan will disrupt the Afghan truce pact, drag Afghanistan into a protracted civil war and push the war-torn country back to 2001. In the process, Pakistan itself could face a meltdown.

The problem is Pakistan has not much steam left to pull off the dangerous gamble the Generals are bent upon playing. The Generals are blind to the writings on the wall. They have already dragged the country to a possible economic ruin. The coronavirus epidemic is doing the rest. The aftermath of the economic downslide and the pandemic could pull Pakistan into a far worse situation than it faces today. But the Generals are not willing to pay heed.

They were able to arm twist a desperate Donald Trump into a peace pact with the Taliban, minus the legitimate government of Ashraf Ghani. Now,  Pakistan believes that it is free to get a proxy government in Kabul and it can set the rule book, and keep India out of the picture.

What they are missing, like always, is the big picture. The bigger picture is crystal clear to everyone but the Generals of Rawalpindi. The Afghan people are extremely wary of Pakistan and its proxy, the Taliban. So they are not welcome, which means Pakistan will have to deal with a new kind of insurgency. The Taliban itself is a slippery agent, has in the past hoodwinked Rawalpindi. This makes the possible insurgency even more complicated.

An unstable border could mean additional military commitments, and more money, on the western border. Although the Afghan-Pak border is fenced now, millions of refugees fleeing a rabidly extremist Taliban regime will find themselves trapped, and the ensuing bloodbath of the Pashtuns is likely to trigger a worldwide hue and cry, and fuel the brewing dissent among the Pakhtun community in Pakistan against the Generals.

The Taliban victory, which is what Pakistan is aiming at, will sow new seeds of terrorism and extremism in the country, and possibly could become a new ISIS hotspot. Pakistani people, especially women, would face the brunt of the renewed surge of extremism in the country. The Generals will try to use the new extremist groups to play against one another, and to engineer political alignments in their favour. The truce with the Taliban has already encouraged the extremist elements within Pakistan, as was witnessed during the Aurat march in March when the women taking out the rally were stoned by clerics supporting Maulana Abdul Aziz of the banned Red Mosque of Islamabad. 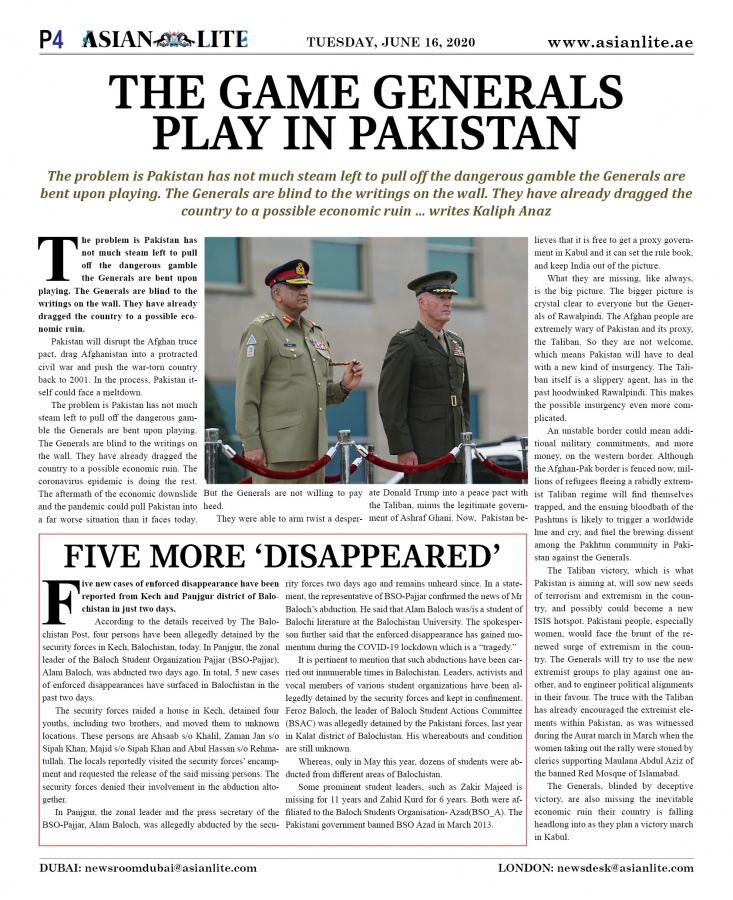 The Generals, blinded by deceptive victory, are also missing the inevitable economic ruin their country is falling headlong into as they plan a victory march in Kabul.

Five new cases of enforced disappearance have been reported from Kech and Panjgur district of Balochistan in just two days.

According to the details received by The Balochistan Post, four persons have been allegedly detained by the security forces in Kech, Balochistan, today. In Panjgur, the zonal leader of the Baloch Student Organization Pajjar (BSO-Pajjar), Alam Baloch, was abducted two days ago. In total, 5 new cases of enforced disappearances have surfaced in Balochistan in the past two days.

In Panjgur, the zonal leader and the press secretary of the BSO-Pajjar, Alam Baloch, was allegedly abducted by the security forces two days ago and remains unheard since. In a statement, the representative of BSO-Pajjar confirmed the news of Mr Baloch’s abduction. He said that Alam Baloch was/is a student of Balochi literature at the Balochistan University. The spokesperson further said that the enforced disappearance has gained momentum during the COVID-19 lockdown which is a “tragedy.”

It is pertinent to mention that such abductions have been carried out innumerable times in Balochistan. Leaders, activists and vocal members of various student organizations have been allegedly detained by the security forces and kept in confinement. Feroz Baloch, the leader of Baloch Student Actions Committee (BSAC) was allegedly detained by the Pakistani forces, last year in Kalat district of Balochistan. His whereabouts and condition are still unknown.

Whereas, only in May this year, dozens of students were abducted from different areas of Balochistan.

Some prominent student leaders, such as Zakir Majeed is missing for 11 years and Zahid Kurd for 6 years. Both were affiliated to the Baloch Students Organisation- Azad(BSO_A). The Pakistani government banned BSO Azad in March 2013.