China sees human rights as an existential threat, as the Human Rights Watch puts it, the attack on the Basic law that describes relationships between Beijing and Hong Kong was inevitable. The communist government of China has been apprehensive about the civil liberties such as press freedom, freedom of speech, privacy and equality being enjoyed by the people of Hong Kong which it fears could influence the mainlanders. It may not just urge people of China to seek such rights for themselves but give more powers to the separatist moments in Tibet, Xinjiang, Yunnan and other areas, which were acquired by China with use of force.

“If not challenged, Beijing’s actions portend a dystopian future in which no one is beyond the reach of Chinese censors, and an international human rights system so weakened that it no longer serves as a check on government repression,” said Kenneth Roth, Executive Director of the Human Rights Watch while commenting on the 2019 Hong Kong pro-democracy protests.

After it failed to introduce the extradition law in Hong Kong last year that was aimed at suppressing the dissent, Beijing now has imposed the security law that would not just deprive Hong Kong residents of their democratic rights but silent Beijing’s critics. Now, these people feel that their voice and demands for democracy will no longer be heard. Also, they will be subjected to the total subjugation by mainland authorities, which goes against the Sino-British Joint Declaration. It offered a high degree of autonomy to Hong Kong over all issues other than foreign affairs and defense for 50 years until 2047.

The then Chinese President Jiang Zemin had assured the world that Beijing would carry out the “one country, two systems” plan of local autonomy during the formal handover of Hong Kong in 1997. However, many just did not believe it. The US had warned China that its behaviour with respect to Hong Kong would be considered a touchstone in Sino-American relations. And China attempted to strike a first blow at the Basic Law in just six years in 2003.

Article 23 of Hong Kong’s Basic Law, which serves as its mini constitution, says the territory must enact, “on its own”, national security laws to prohibit “treason, secession, sedition [and] subversion” against the Chinese government. However, Beijing skipped Hong Kong’s legislative council and directed China’s top legislative body National People’s Congress to draft the bill. The “one country, two systems” principle has been destroyed by China by overturning the treaty with the British.

Subversion of international rules and bilateral treaties has been a part of China’s imperialistic design, which ranges from violation of the International Health Regulations in case of disinformation about Covid-19 to rebuffing the Permanent Arbitration Tribunal’s decision on South China sea dispute to manipulating countries into debt-trap under Belt Road Initiative. So, there is a room for one to assume the Xi Jinping government did not care about international criticism while overturning the Hong Kong agreement.

During her state visit to China in 2016, German Chancellor Angela Merkel had confronted Beijing over sharing fundamental principles and convictions in partnership. “The rule of law is one of them. The core of the rule of law is that what counts is the power of law and not the law of the powerful,” she had said.

Tim Rühlig, research fellow at the European Institute for Asian studies, said China adopts a functional approach to law because when translated, law means method in Chinese, which is a means to get things done and nothing natural.

“China has a very different legal tradition that does not treat legality as carrying normative value in itself. This functional approach goes along with a preference for vague legal norms that allow very different interpretation and do not constrain political decision-making all too much,” Rühlig said in the report titled ‘How China approaches international law: Implications for Europe’.

There could be another compelling reason why Beijing did not think about the huge dent to its image for not living up to its 1997 treaty obligations. It is the fear of repeat of the Tiananmen Square protests. In 1989, the Tiananmen revolution failed since the movement was restricted to students and the China was underdeveloped country, without middle class – major driving force for a revolution. Had there been active participation of middle class, the outcome of 1989 could have been different. Now Beijing sees the Hong Kong protests are not limited to students only but attracted mass population from every aspect of life. It means the demand for pro-democratic system gets boost as well as similar protests might spread across China like wildfire. 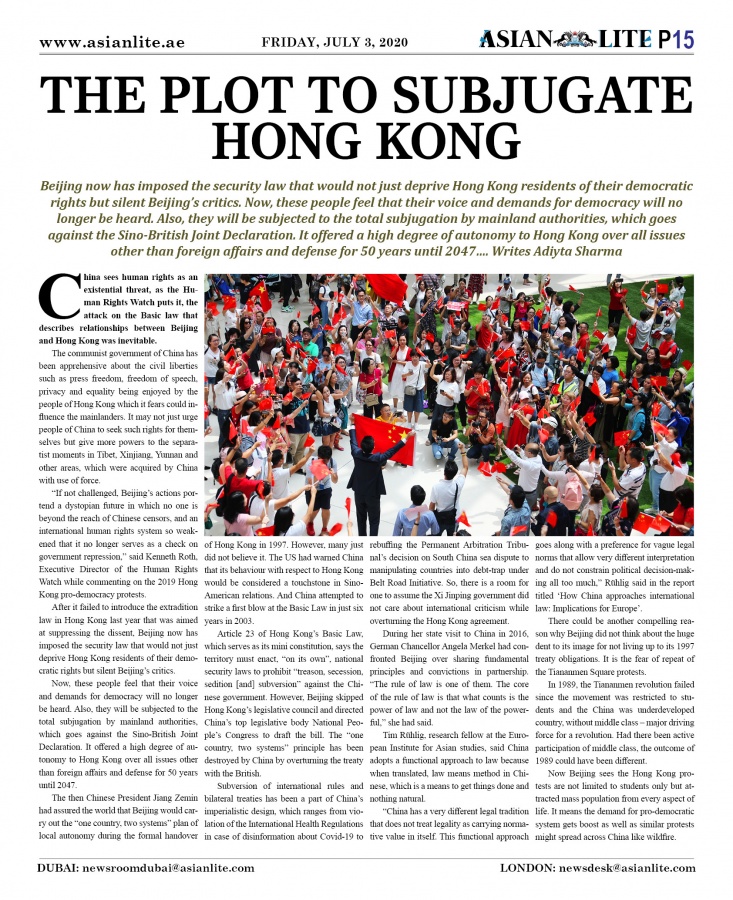 Over 7,500 demonstrators have been arrested in Hong Kong for their participation in the protests that were against the mainland authorities’ move to further encroach upon the territory’s civic freedoms. Those arrested include district councilor Cheng Lai-king, media tycoon Jimmy Lai and political activists Yeung Sum and Lee Cheuk-yan. Now, a group of 86 human rights organisations have urged China to abandon a national security law for Hong Kong, calling the legislation “a devastating assault on human rights”.  This group that include Amnesty International, Human Rights Watch and Freedom House has said the legislation “criminalises broad, vague ‘offences’ that can encompass any criticism of the government and be used against people peacefully exercising and defending their human rights.”