From Nepal’s Chief of Army Staff, General Purna Chandra Thapa to Prime Minister K.P. Sharma Oli’s office, the Chinese Ambassador in Kathmandu, Hou Yanqi has access to almost any place under the sun in the Himalayan Republic.

As the young Chinese ambassador Hou Yanqi, redefines diplomacy in Kathmandu, she is seen as a key factor behind PM Oli’s unexpected move to amend a map which includes disputed territories with India.

Besides the map controversy, Hou Yanqi recently approached a few top leaders of the ruling Nepal Communist Party (NCP) to douse the blazing resentment against Oli, led by the rival faction within the NCP.

Hou is said to be on good terms as well with NCP Chairman Pushp Kamal Dahal Prachanda, the former Prime Minister of Nepal.

Considered as the most powerful diplomat in Nepal, Hou Yanqi is also close to Nepalese Chief of Army Staff Gen Purna Thapa. On May 13, Hou presided over a large function of the People Liberation Army (PLA) in Kathmandu in which Gen Purna Thapa was invited as Chief Guest.

A plane load of medical supplies brought by PLA from Beijing was handed over by Hou Yanqi to Gen Thapa.  Similarly when Nepal was faced with its initial crisis of COVID-19 in early April, Hou was quick to arrange a brief telephonic meeting between Chinese President Xi Jinping and Nepalese President Bhandari. Later in a press statement (April 27) the Chinese embassy said that Xi has assured that China will take full care of Nepalese people in its fight against the pandemic.

Last week when a section of Indian media carried stories about the Chinese Ambassador’s involvement in the map controversy, Hou Yanqi chose to clear her stand by giving a long interview to leading Nepali dailies, The Rising Nepal and Gorkhapatra on July 1. In Gorkhapatra she said while clarifying the Kalapani territory issue, “I know that some irresponsible media groups are always trying to provoke public opinion. The issue of Kalapani is between India and Nepal”. The Chinese envoy hinted that Beijing had no role to play in the dispute.

The young Chinese diplomat is also followed by a large number of Nepali people on Facebook and on her Twitter account. Recently Hou was in the news when she posed as a model for an exclusive photo shoot in Kathmandu. The pictures, taken at popular tourist spots in the Nepalese capital instantly went viral in the local and social media. 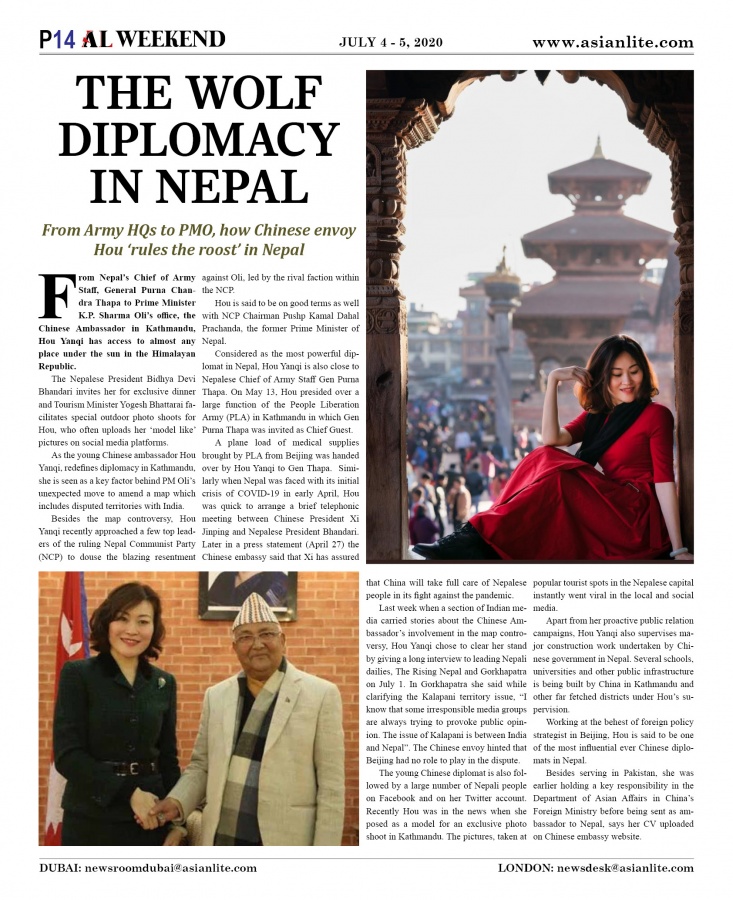 Apart from her proactive public relation campaigns, Hou Yanqi also supervises major construction work undertaken by Chinese government in Nepal. Several schools, universities and other public infrastructure is being built by China in Kathmandu and other far fetched districts under Hou’s supervision.

Working at the behest of foreign policy strategist in Beijing, Hou is said to be one of the most influential ever Chinese diplomats in Nepal.

Besides serving in Pakistan, she was earlier holding a key responsibility in the Department of Asian Affairs in China’s Foreign Ministry before being sent as ambassador to Nepal, says her CV uploaded on Chinese embassy website.