UN Secretary General Antonio Guterres is concerned about the clashes between Indian and Chinese troops along the Line of Actual Control in Ladakh and asked the two nations to exercise restraint, a spokesperson said.

Guterres’s Associate Spokesperson Eri Kaneko said: “We are concerned about reports of violence and deaths along the Line of Actual Control between India and China.”

She added: “We urge both sides to exercise maximum restraint. We take positive note of reports that the two countries are engaged in deescalating the situation.”

The clashes on Monday, during which no firearms were reportedly not used, was probably the worst confrontation since the 1962 war between the neighbours.

Sources said that the death toll is likely to go up as many soldiers have been brutally injured.

Colonel B. Santosh Babu of the 16 Bihar Regiment and 19 other Indian Army personnel were killed. Unlike India, China has not officially said if there it had suffered casualties.But Hu Xijn, editor of the Global Times, tweeted that there were Chinese casualties but the government did not want to publish the numbers because they do not “want people of the two countries to compare the casualties number so to avoid stoking public mood. This is goodwill from Beijing.

Indian Army issued a statement on Tuesday night wherein it said, “17 Indian troops who were critically injured in the line of duty at the standoff location and exposed to sub-zero temperatures in the high altitude terrain have succumbed to their injuries, taking the total that were killed in action to 20.”

The force further stated that Indian and Chinese troops have disengaged in the Galwan area where they had earlier “clashed on the night of June 15 and June 16, 2020.”

The force further stated that Indian Army is firmly committed to protect the territorial integrity and sovereignty of the nation.

An unprecedented violent clash took place in Galwan Valley at the Line of Actual Control with Chinese People’s Liberation Army soldiers attacking a small group of Indian Army men on patrol, resulting in fatalities which included the commanding officer of the Indian Army.

The intensity of the fight increased with reinforcements from the both sides and it continued until late night till the time they got exhausted. Many Indian soldiers went missing during the fight. Early on Tuesday morning, both Indian and Chinese top military officials rushed and called for a meeting to defuse the situation.

These are the first casualties faced by the Indian Army in clash with the People’s Liberation Army since 1975 when an Indian patrol was ambushed by Chinese troops in Arunachal Pradesh.

Singh met Modi after he held a meeting with External Affairs Minister, S. Jaishankar, Chief of Defence Staff, General Bipin Rawat, and the three service chiefs in the South Block here to review the situation.

Singh asked the service chiefs to explain the current situation in Galwan Valley and what course of action could be taken from hereafter diplomatically.

Indian Army Chief General Manoj Mukund Naravane was to visit Kashmir on Tuesday morning but following Monday night’s developments at the LAC, it was cancelled. 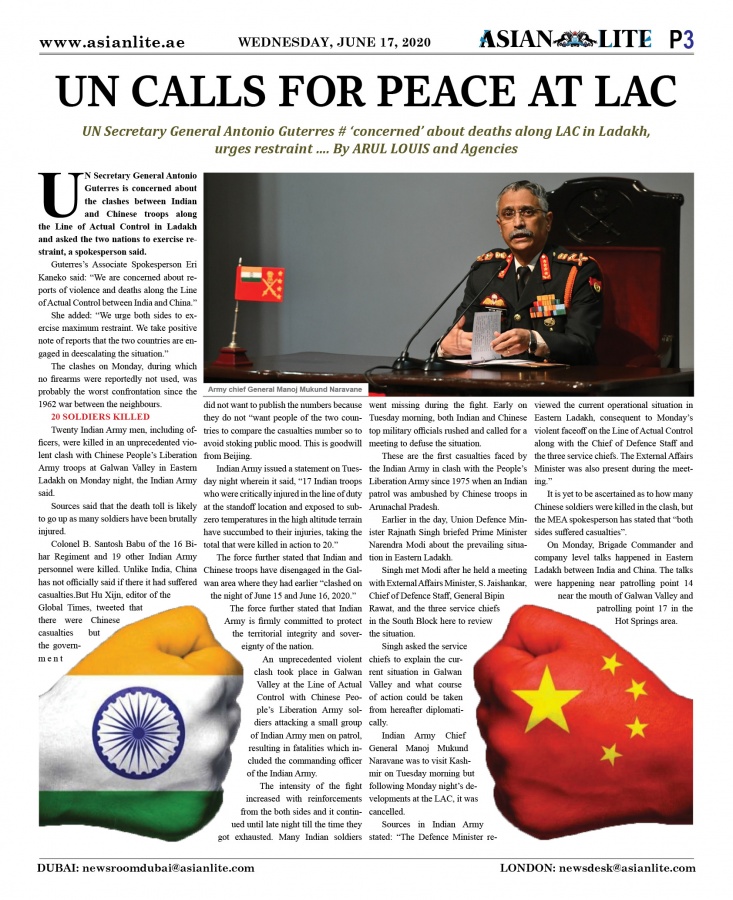 Sources in Indian Army stated: “The Defence Minister reviewed the current operational situation in Eastern Ladakh, consequent to Monday’s violent faceoff on the Line of Actual Control along with the Chief of Defence Staff and the three service chiefs. The External Affairs Minister was also present during the meeting.”

It is yet to be ascertained as to how many Chinese soldiers were killed in the clash, but the MEA spokesperson has stated that “both sides suffered casualties”.

On Monday, Brigade Commander and company level talks happened in Eastern Ladakh between India and China. The talks were happening near patrolling point 14 near the mouth of Galwan Valley and patrolling point 17 in the Hot Springs area.