“We strongly urge the UNHRC and the member states to hold a special session to evaluate the human rights violations being carried out by China and to establish a country mandate of UN Special Rapporteur on China to monitor, analyze and report annually on the human rights situation in Tibet,” a CTA statement quoting its President Lobsang Sangay said.

Fifty UN independent experts from 30 UN Special Procedure mandate called on the UNHRC to “act with a sense of urgency” to take all appropriate decisive measures, including a special session and establishment of a rapporteur, to protect fundamental freedoms in regions under China, including Tibet, Hong Kong and Xinjiang.

The CTA thanked the UN experts for their timely intervention and welcome their call for urgent decisive measures against the government of China.

The UNHRC on June 26 said UN independent experts have repeatedly communicated with the government of China their alarm regarding the repression of fundamental freedoms in the Asian giant.

They have denounced the repression of protest and democracy advocacy in Hong Kong, impunity for excessive use of force by police, the alleged use of chemical agents against protesters, the alleged sexual harassment and assault of women protesters in police stations and the alleged harassment of healthcare workers.

The Tibetan government-in-exile is based in this northern hill town of Dharamsala in Himachal Pradesh.

In an earlier interview, CTA) President Lobsang Sangay  says the ongoing military aggression across the Himalayas is not the first by China and it won’t be the last.

India never shared a border with China — it is the Indo-Tibet border. Knowing its strategic significance, India should consider the geopolitical importance of Tibet as one of its core issues.

Sangay, globally known as Prime Minister-in-exile, regarding a Himalayan border clash between India and China that left 20 Indian troops dead earlier this month.

“That’s how Tibet is geopolitically important for China. Knowing the strategic significance of Tibet, India should consider the geopolitical importance of Tibet as one of its core issues,” he said.

“As matter of fact, India never shared a border with China, it’s the Indo-Tibet border. Tibet served as a zone of peace in the form of a buffer between India and China for more than thousand years ago. Today, it is no longer the case since China’s invasion of Tibet in 1950.

“By invading Tibet, China has militarized the entire Tibetan Plateau, which poses security threats to Tibet’s neighbouring countries. For instance, China’s military encroachment in Doklam in 2017, Ladakh and Sikkim are just the tip of the iceberg.”

Toeing the path adopted by Tibetan spiritual leader the Dalai Lama for years to resolve the issue of Tibet with China through the ‘middle-way approach’, Sangay described the violent military face-off and death of the Indian soldiers uncalled for.

“Last 70 years, we have been saying that we learn a lesson from Tibet’s experience. When Tibet was occupied, Mao Zedong and Chinese communist leaders strategised that Tibet is the palm and Ladakh, Nepal, Sikkim, Bhutan and Arunachal are the five-finger.

“This is China’s strategic design to expand its expansionist policy to South Asia. By invading Tibet the palm, now Chinese troops are coming into these five fingers.

On boycotting Chinese goods to deal with China economically, he said Beijing is the manufacturing hub of the world and is the major trading partner for many countries.

“I think collectively, countries must cut down their trade dependence on China. There are a lot of things that can be done on the government level, also I think celebrities are a major influencer when it comes to consumerism and therefore, they shouldn’t promote China made products.”

“As I keep saying, a resolution for resolving the Tibet issue is making Tibet a peace zone,” he said.

“Asia’s future cooperation and development depends on the nature of India-China relations. Having robust relations between China and India, Tibet issue must be resolved, it is because Tibet issue lies the centrality of China-India relations.

“Creating Tibet as a zone of peace in Asia is a win-win approach. Having said that, I see, the future of Asia depends on the Tibet issue,” Sangay was categorically clear in his saying.

On resolving the issue of Tibet with China by the CTA, Sangay, who is at helm for his second consecutive term, believes in dialogue.

According to current India-China conflicts ranging from border dispute to international relations, he said, “I see that our ‘middle-way approach’ is the best solution to resolve our issue as well as China-India’s conflict too”.

The ‘middle-way approach’, he said, through dialogue with China is envisioned by His Holiness the Dalai Lama and followed by the CTA.

Since the early 1970s, the CTA has pursued dialogue with the Chinese government based on the ‘middle-way approach’.

The global support received for the Tibetan cause has further re-affirmed CTA’s commitment to the ‘middle-way approach’. China will achieve the global standing it desires with its current path of coercion and military aggression and record of gross human rights violation. 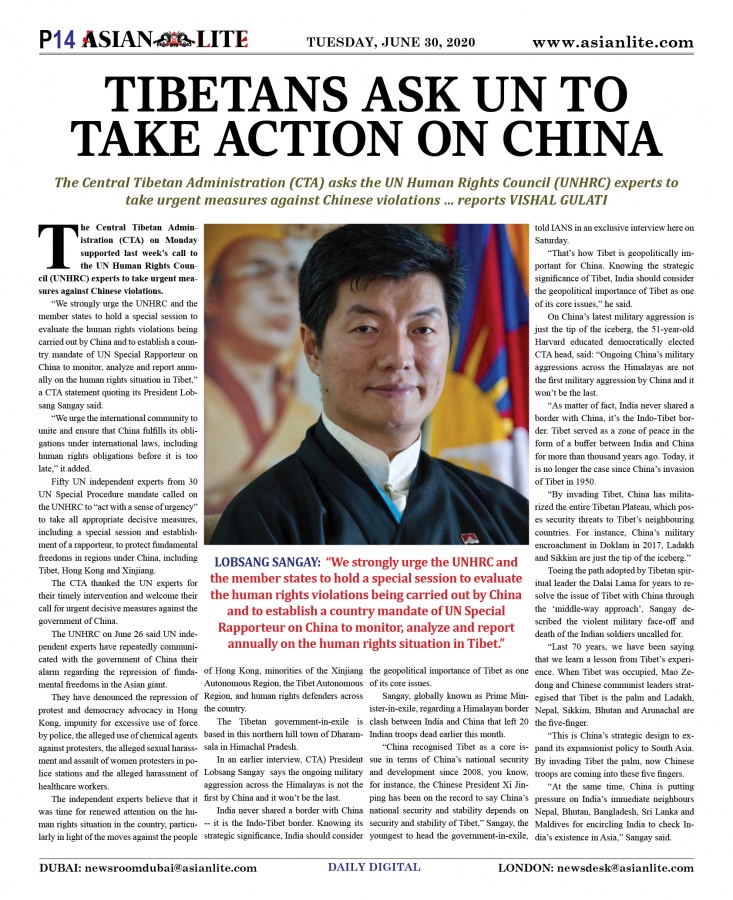 The middle-way approach neither seeks separation from the People’s Republic of China nor a high degree of autonomy but genuine autonomy for all Tibetan people under a single administration in Tibet.

“To gain international legitimacy to China, I hope that Chinese leadership will realize how important it is soon,” an optimistic Sangay added.