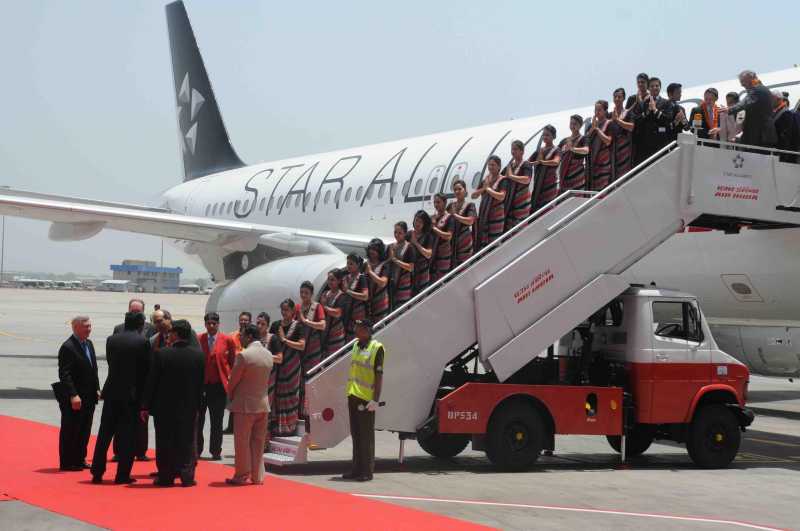 It took eight years and a host of hiccups before flag carrier Air India finally joined Star Alliance, the world’s largest airline accord. And finally, the 60 million passengers who fly from the world’s fifth largest aviation market will gain better global connectivity and access, analysts maintain.

Sharing of flying miles and entry to some of the finest airport lounges of the 27 member carriers of Star Alliance is a given. Other benefits include single-ticket travel throughout the world with far less transit time that some times can be quite harrowing.

This apart, Air India will also offer through check-in to the final destination, even if it requires transit through the flights of other Star Alliance members — seamless travel without having to pick checked-in baggage and check them in again at transit airports.
Star Alliance, through its 13 member-airlines which operate in India to 10 destinations, accounts for a total share of 13 percent of India’s market. The inclusion of Air India in the alliance will take this share to about 30 percent.
Air India officials said the carrier, with over 400 daily flights to more than 50 domestic and 33 international destinations, hoped to earn a 5-6 percent jump in revenues in the current fiscal itself.
“For Star Alliance, this pact entails at least 40 Indian and 13 new unique (domestic and international) destinations to their network. Our passengers will get access to over 18,500 daily flights to 1,316 destinations in 192 countries,” a senior Air India official said but requested not to be quoted as he was not authorised to speak to media.
“Our passengers will also get direct connections to places in the North American and African markets on a single ticket. The move is also expected to increase the inflow of international tourists to India,” the official said.
Previously, passengers on Air India’s flights to the US and Europe did not get easy connecting flights to other destinations that are farther away. This will change as alliance members will be able to provide single ticket travel to these destinations.
Air India will also get advantage cost-savings, as the alliance makes bulk purchases of fuel as a single entity. Apart from this, Air India will also be able to add other unique characteristics like a Star Alliance passenger member seat on board.
“It is a great achievement of Air India Chairman and Managing Director Rohit Nandan and his top team. It is expected to bring more domestic and international passengers for the airline,” said Amber Dubey, a partner with KPMG.
“It will also bring in greater scrutiny of their infrastructure and service standards. It will also enhance its valuation if the government decides to go for partial or complete privatization of Air India,” Dubey, who is also the India head for aerospace and defence business at the global consultancy, said.
Air India has also become the only airline from India to have joined a global inter-line alliance — the other two global inter-line accords are of oneworld and SkyTeam.
“This increases the overall attractiveness of flying Air India with increased access to lounges and an improved frequent flyer programme,” said Rajiv Chib, associate director – aerospace and defence, PricewaterhouseCoopers.
Above all, Air India will now have to live up to the challenge of high service standards, clean aircraft and on-time performance if it is to keep market share at a time when international airlines are aggressively enhancing capacity into India.
“Joining Star is a positive step for Air India. It will add more passengers and more destinations. The market here is very competitive and price sensitive,” Vishwas Udgirkar, senior director, Deloitte India, said.
“The airline now has the advantage of being a Star member. This is bound to fetch its passengers better punctuality and greater service standards. It will add to Air India’s advantage at a time when Gulf- and South Asia-based airlines are enhancing capacity into India.”