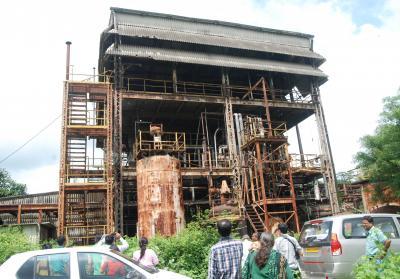 “Can you go to Bhopal immediately? Something big seems to have happened. Many people have died. You can help out our local bureau and return after two or three days.”
This was U.R. Kalkur, a marvel of a journalist who was the deputy general manager of UNI. He spoke hours after the Bhopal gas leak of Dec 2-3, 1984, whose bloody magnitude wasn’t clear then but which turned out to be the world’s worst industrial disaster.

All that our Bhopal colleagues knew for sure – and had told Kalkur – was that there had been an unprecedented calamity and they needed help to cover it.

I flew to Bhopal post-noon of Dec 3, landing in a city that had been enveloped by the stench of thousands of deaths caused by a leak of lethal gas from the Union Carbide’s pesticide plant.

It became clear in no time that I was in for a long haul. The “two or three days” that Kalkur said I would spend in Bhopal became 16 long days – when the world turned upside down for tens of thousands of innocents. The culprit was corporate greed.

Since the Madhya Pradesh authorities appeared to have no real idea about what had happened and how, it was left to the ingenuity of the journalists to report the world’s biggest news story.

How many people had died? No one could say for sure. The police had no clear figures, the hospitals were mostly in the dark and there was no trace of the otherwise voluble Chief Minister Arjun Singh and his minions.

As for the guilty Union Carbide, it simply threw up its hands.

The earliest credible story spoke of a huge mass of a poisonous gas called MIC, used to produce pesticide, leaking on the night of Dec 2-3, catching – barring a few Carbide employees – Bhopal by surprise.

Tens of thousands who were asleep suddenly woke up to a stinging pain in their eyes. Some began to throw up or had violent fits.

Like in a horror movie, thousands of men, women and children fled their houses screaming and crying in pain, many not even aware where they were headed to. Thousands simply collapsed on the streets — dead.

Within 24 to 48 hours, a staggering 3,500 had died. Animals and birds too perished in thousands.

At the hospitals, doctors had no clue how to treat the victims of the poison gas.

The worst hit was the sprawling shanty just outside the now shuttered Carbide plant. But the gas did travel a long way, killing some employees at the Bhopal railway station too.

Trains coming into Bhopal were quickly and fortunately diverted, preventing a disaster.

Most of those who were exposed to the gas but didn’t die went to hell: they lost eyesight or began to suffer various ailments that continued to kill, taking the overall death toll since 1984 to well over 25,000.

There seemed to be only one way of knowing how many were dying in Bhopal: virtually camp at the mortuaries of the main hospitals as well as the Hindu cremation and Muslim burial grounds.

The other source of news was a small crop of selfless activists who emerged almost out of nowhere and most of whom continue to work even today for the 1984 survivors.

I still vividly recall the words of one Muslim gravedigger who sweated away despite the winter as he worked furiously with a spade: “I have no idea, Sir, how many have died. I have no idea how many bodies have come in today. I am just digging, Sir. I know nothing. Only Allah knows.”

He was probably right. For a long time it did seem as if only god knew how many had died and how many were barely living in Bhopal.

For this monstrous crime, Union Carbide, now owned by Dow Jones, got away by paying peanuts as financial compensation. Indian lives come cheap.