MRS MAY: “From my first day in the job, I knew I had a clear mission before me – a duty to fulfil on your behalf: to honour the result of the referendum and secure a brighter future for our country by negotiating a good Brexit deal with the EU. Throughout the long and complex negotiations that have taken place over the last year and a half, I have never lost sight of that duty”

Prime Minister Theresa May has written a letter to the British public seeking their support for her Brexit deal, as EU leaders arrive at Brussels to discuss it.

European Council chief Donald Tusk has recommended all countries approve May’s deal. The prime minister said her agreement promises a “brighter future” for the UK and leaving the EU next year will be “a moment of renewal and reconciliation for our whole country”.

In the letter she wrote: “When I became your prime minister the United Kingdom had just voted to leave the European Union.

“From my first day in the job, I knew I had a clear mission before me – a duty to fulfil on your behalf: to honour the result of the referendum and secure a brighter future for our country by negotiating a good Brexit deal with the EU. Throughout the long and complex negotiations that have taken place over the last year and a half, I have never lost sight of that duty.

“Today, I am in Brussels with the firm intention of agreeing a Brexit deal with the leaders of the other 27 EU nations. It will be a deal that is in our national interest – one that works for our whole country and all of our people, whether you voted ‘Leave’ or ‘Remain’.

It will honour the result of the referendum. We will take back control of our borders, by putting an end to the free movement of people once and for all. Instead of an immigration system based on where a person comes from, we will build one based on the skills and talents a person has to offer.We will take back control of our money, by putting an end to vast annual payments to the EU.

“Instead, we will be able to spend British taxpayers’ money on our own priorities, like the extra £394 million per week that we are investing in our long-term plan for the NHS. And we will take back control of our laws, by ending the jurisdiction of the European Court of Justice in the UK. In future, our laws will be made, interpreted and enforced by our own courts and legislatures.

“We will be out of EU programmes that do not work in our interests: out of the common agricultural policy, that has failed our farmers, and out of the common fisheries policy, that has failed our coastal communities. Instead, we will be able to design a system of agricultural support that works for us and we will be an independent coastal state once again, with full control over our waters.

“EU citizens who have built their lives in the United Kingdom will have their rights protected, as will UK citizens living elsewhere in the EU. A free trade area will allow goods to flow easily across our borders, protecting the many skilled jobs right across the country that rely on integrated supply-chains.

“Because our European friends will always be our allies in the fight against terrorism and organised crime, the deal will ensure that security co-operation will continue, so we can keep our people safe. 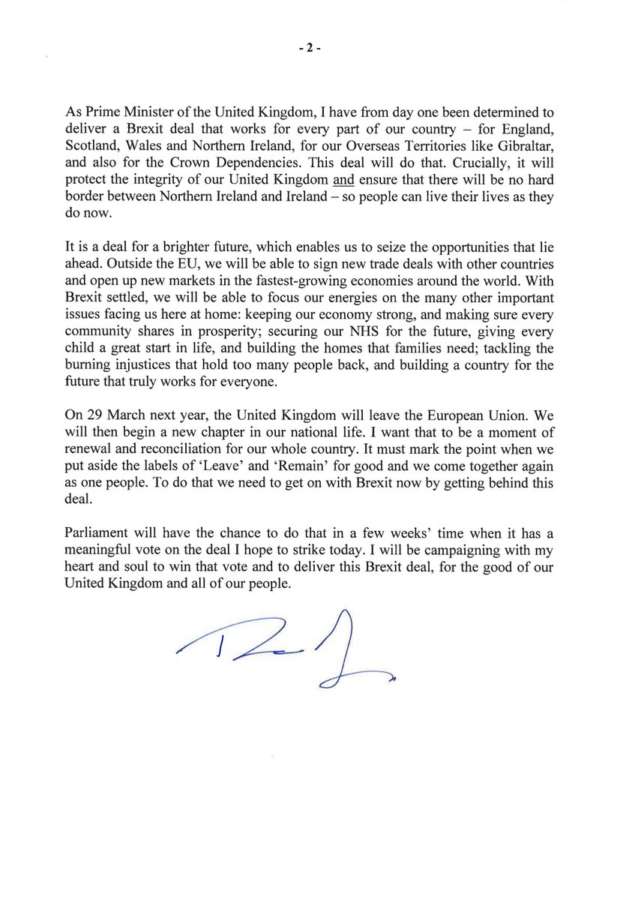 “As prime minister of the United Kingdom, I have from day one been determined to deliver a Brexit deal that works for every part of our country – for England, Scotland, Wales and Northern Ireland, for our Overseas Territories like Gibraltar, and also for the Crown dependencies. This deal will do that. Crucially, it will protect the integrity of our United Kingdom and ensure that there will be no hard border between Northern Ireland and Ireland – so people can live their lives as they do now.

“It is a deal for a brighter future, which enables us to seize the opportunities that lie ahead. Outside the EU, we will be able to sign new trade deals with other countries and open up new markets in the fastest-growing economies around the world.

“With Brexit settled, we will be able to focus our energies on the many other important issues facing us here at home: keeping our economy strong, and making sure every community shares in prosperity; securing our NHS for the future, giving every child a great start in life, and building the homes that families need; tackling the burning injustices that hold too many people back, and building a country for the future that truly works for everyone. On 29 March next year, the United Kingdom will leave the European Union.”

Spain, which had threatened to boycott the summit, will attend after a last-minute disagreement over Gibraltar was resolved on Saturday. However, even if the EU agrees to the deal, it needs to be passed by the UK Parliament, and many MPs – including in Mrs May’s own Conservative Party – have stated they will vote against it.

A vote is expected in December. Labour, the Liberal Democrats, the SNP and the DUP have all said they will vote against the government’s deal, as well as many Conservatives. The agreement will also have to go back to the European Council, where a majority of countries (20 out of 27 states) will need to vote for it. It will also need to be ratified by the European Parliament.

If MPs reject the deal, a number of things could happen – including leaving with no deal, an attempt to renegotiate or a general election.

According to the Sunday Times, Chancellor Philip Hammond is working with other Cabinet ministers to trying to persuade Mrs May to opt for a softer Brexit deal, which they believe could get through Parliament if her original deal is rejected.

The Sunday Telegraph meanwhile reported that several senior ministers are working on a plan B – for a Norway-style relationship with the EU.