Home Business Business on top in Modi’s US agenda
Advertisements 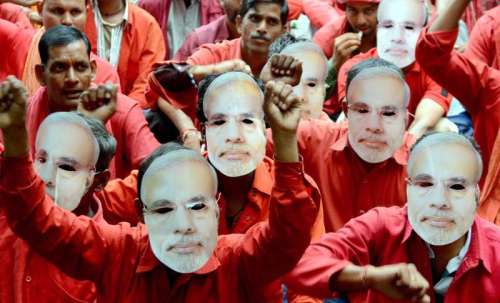 Prime Minister Narendra Modi leaves Thursday on a five-day much anticipated visit to the US, during which he will address the UN General Assembly and also hold a summit meeting with US President Barack Obama which would see trade and investment high on the agenda.

The visit to the US caps a month of fast paced, high level diplomatic events that saw Modi interact with leaders of Japan, Australia and China — Japanese Prime Minister Shinzo Abe, Australian Prime Minister Tony Abbott and Chinese President Xi Jinping — and also the inking of major agreements with the three countries.

Modi and Obama would interact Sep 29 and 30 in Washington, which would also see the US president hosting a dinner in honour of the Indian prime minister.

Modi has a packed schedule of 35 engagements during his Sep 26-30 visit.

Modi, who would be observing the nine-day Navratri fast during his trip, would be holding three bilateral meetings with neighbours – Sri Lankan President Mahinda Rajapaksa, Nepal Prime Minister Sushil Koirala and Bangladesh Prime Minister Sheikh Hasina – on the sidelines of the UNGA.

Modi would meet the CEOs of Fortune 500 US companies, including Boeing, Pepsico, Google, General Electric and Goldman Sachs among others and also hold one-on-one meetings with some of them.

Trade and investment, energy, science and technology, defence and security are expected to be the areas of focus during the talks with Obama.

Both sides would seek to give much-needed impetus to the flagging bilateral relationship during the meeting.

This is Modi’s maiden visit to the US since becoming prime minister and it would also be his first interaction with Obama.

Modi will also pay homage at the 9/11 memorial in New York and meet 300 members of the Indian American business community. He would also address a few thousand of the large Indian community at the Madison Square Garden.

His interactions in the US would be with political leaders, administration, the business community, civil society, with the US states and cities and the vibrant Indian diaspora, said external affairs ministry spokesperson Syed Akbaruddin.