In his recent book, “Has China Won” published in March 2020, and in the many earlier books, Kishore Mahbubani has stated “US has blundered into geopolitical contest with China”. Many other authors like Martin Jacques and Freidman also talk of the situation of Chinese domination, but the future is dependent on their performance.

I have raised these questions in my latest book, “Containing the China Onslaught”, and the new world has to be evaluated keeping the numerous confrontations/attacks China faces from the US, the world and even itself (democratic forces, Uyghurs, Hong Kong and many other regions and leaders like Deng’s invalid son, a casualty of red guards back in 1975). China is not the inevitable winner, any longer.

The last round till around 2015 was convincingly won by China by manipulating the US in its favour. The war this time can be won by all opposing democracies, if they are able to partner with the US. Let us first look at US power China is challenging.

The reality of American power is complicated, and always carefully built behind facades. I will only cite a few instances.

— The major source of US financial power comes from the major reserve currency status of dollar, which had led to John Connally, former US Secretary of the Treasury, telling European finance ministers that, “Dollar is our currency but it is your problem”.

— To put things in perspective, 2,043 Americans were killed in Pearl Harbour, but Japan paid the price, multiple times when ‘little boy’ and ‘fat man’ were released from the B-29 bomber. The Wuhan virus toll in the USA is nearing 80,000. There is a possibility of a typical cowboy response, “You hit us we will hit you.”

— You will ask if this is possible. The very same questions were asked for the Russian bloc too. But it was, and the USSR was balkanized. Only Deng opined that Gorbachev was an idiot who allowed the Russian empire to collapse.

— It does not matter if the Wuhan virus escaped from a laboratory or was deliberately made to escape or originated in wet markets; China will pay the price, if that is the universal public opinion.

— It has to be realized that globalization/reforms started with bringing in democratic structures to the entire Soviet bloc, but China resisted it, leading to US inspired Tiananmen agitation leading to ‘statue of liberty’ type images being put up on the square, but yet the US praised the massacre in Bush Sr’s letter to Deng. Again, the US strangely, despite the massacre, continued to support China, illustrated by getting China WTO membership in 2001, three years after they made the application, despite everyone knowing of their technology thefts, and a democratic Russia had to wait 14 years to get this membership, changing the entire world. 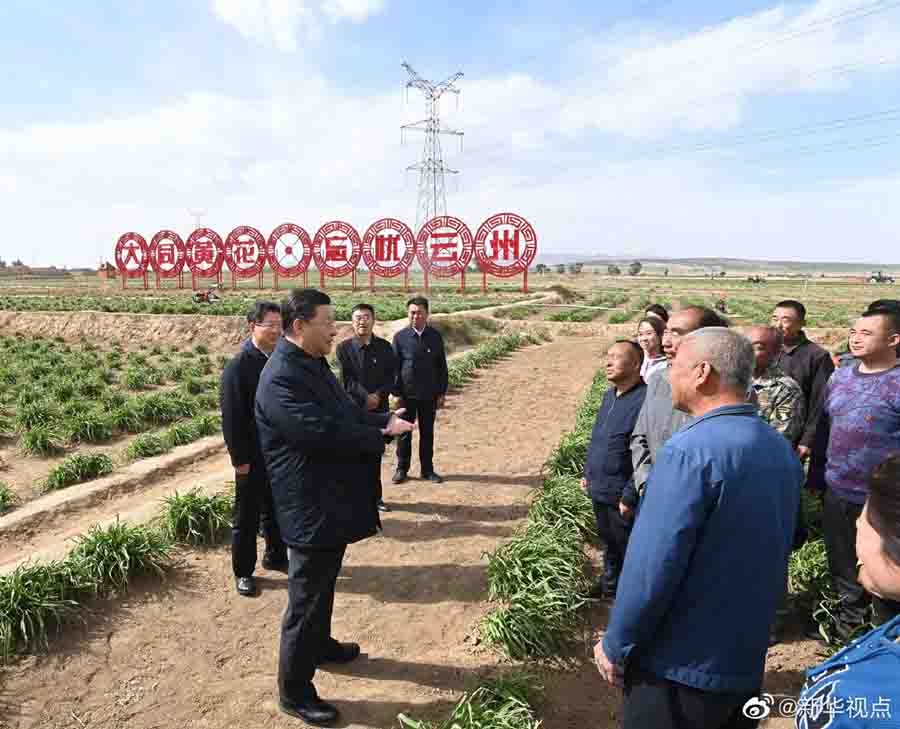 Driven to the wall, the Americans may try to capitalize their power, huge military expenditure, and increased power today due to the cooperation of all democratic countries, particularly in the East, partnering with the US out of fear of having China next door, and being left with no scope to compete and grow against a ‘tributary form of governance’ China, and moving into partnership with US.

The frustrated democratic world is now talking of multiple scenarios of balkanization of China, effected by forces similar to those in the erstwhile Eastern bloc. I am narrating one.

When the world limps back to normalcy, businesses may pull out of China, due to American and international pressures and the need to correct skewed trade and power balances. After all, the entire Kissinger policy flourished in the name of ‘power balances’ (though illogically implemented), and the reversals may be carried out in the same name.

China will flex her military might by increasing her presence in the South China Sea. This will make other countries feel threatened, leading to retaliation by America and other countries.

A cornered China may start bullying smaller countries who refuse to trade with it in consonance with the international anti-Chinese mood. This will trigger even greater military deployment in land, air and sea, of western powers as a deterrent.

Most importantly, it appears that Western Intelligence agencies will release a report that the Wuhan virus was man-made. WHO will counter this report by its own research findings that the Covid-19 has originated in nature and China is not to be blamed.

Western powers will discredit the WHO and its funding pattern will change. China will go against the tide and try to keep WHO afloat. This will happen to many more agencies, increasing the demand for a separate democratic UN, which can be forced to act on democratic principles 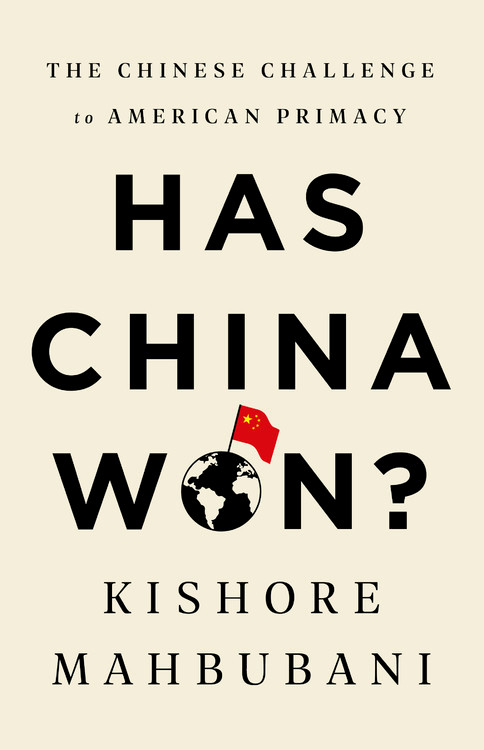 Belligerent statements will emanate from the Chinese government mouthpiece on how strong China is and can match any western power in firepower. Aggressive patrols of Chinese nuclear-tipped submarines and aircraft carriers will start. To retaliate, trade sanctions will be imposed on China (Trump said so recently, tweeted by his China advisor Michael Pillsbury), and its growth rate will collapse, and unemployment will increase, giving Western powers enough reasons to intensify agitations against the ruling class and Xi Jinping, ultimately forcing the Politburo to take a stand against Xi, reminding everyone of stands they took even against Deng. This may lead to a consensus in the world and UN, about the future actions.

What is China’s internal position today:

— The implementation of China policy has made it vulnerable, first by China itself. They pursued policies for being producers for the world, and have, therefore, built huge capacities in 2015 vis-vis the world capacities: 41 per cent ships, 28 per cent automobiles, 80 per cent computers, 90 per cent phones, 50 per cent refrigerators, 80 per cent air conditioners, 24 per cent power, 50 per cent steel. With multiple pressures on China, including those due to Coronavirus, they will find it difficult to sell.

— But an overconfident China is going further. They are implementing similar policies to grow new generation State-controlled industries by programmes such as “Made in China 2025, for next generation industries”. This may lead to excess capacities in new sectors too.

— If these capacities have to sell they have to control markets better. Perhaps BRI is a function of this approach with manufacturing capacities trying to create/reach new markets. But this is being resisted by many countries, and the projects becoming unviable. 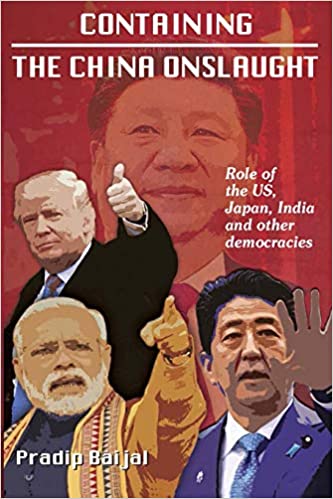 — Bloomberg data shows that if ‘business as usual’ continues in China and the world, the former, with its ‘tributary’ model of governance and 18 per cent of global population, will account for 50 per cent of the world’s GDP in 2070. This would bring huge opposition, since other countries will have no space to grow and could then change world economics to ‘Chinese characteristics — control economics’. These factors will intensify opposition to China.

— Another recent development which may impact world trade is that in December, 2019 onwards World Trade Organization may not be able to fulfill its role due to vacancies in WTO and consequently not being able to act as the arbiter of global trade disputes, and would thus further block trade.

— China is challenging US supremacy in almost all walks of state power e.g. China’s surge in diplomatic ties in 2019, overtaking the US. China has 276 diplomatic outposts in foreign countries which is three more than the US. An inevitable democratic coalition can challenge China.

— There are many other imponderables in the new trade environment, like what would ultimately be the reaction of other countries to BRI. Many are already going along with India and Japan. China has launched BRI which has trapped many countries in debt. It is becoming unpopular day by day, even in Pakistan, where an attack on POK by India, now considered possible, can destroy the Chinese Road project. 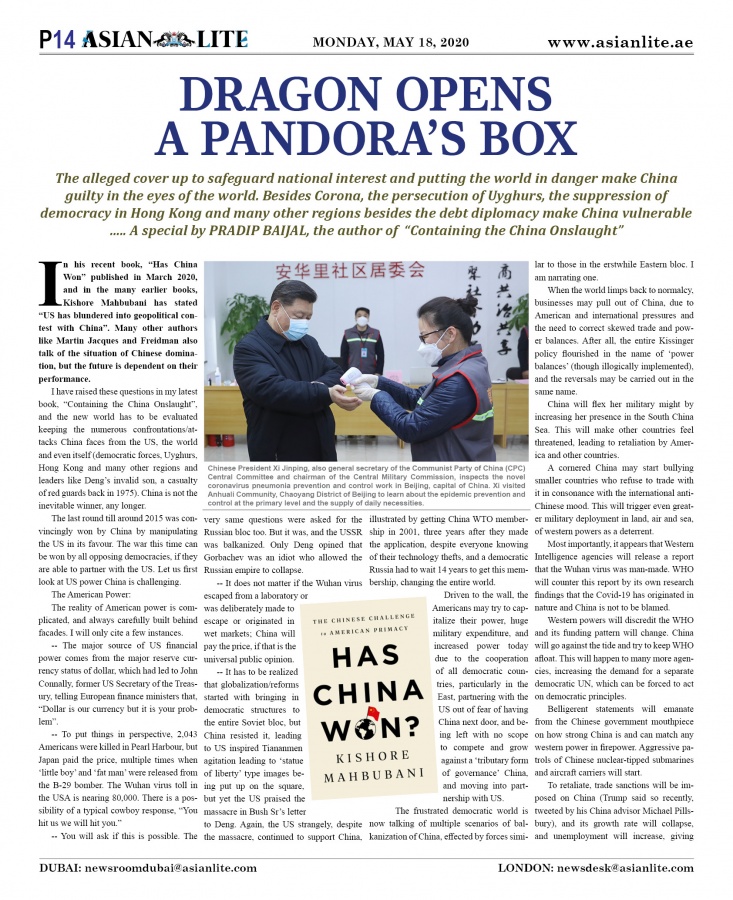 — Continuing trade war between US and China will leave a lot of space for countries like India to grow. The Fourth and Fifth Industrial revolution — on the same medium, same technology and same platform, which Indian minds have built from scratch may threaten other nations, including China. It needs massive state support to excel. The way these sectors grow in India, will decide India and China’s future.