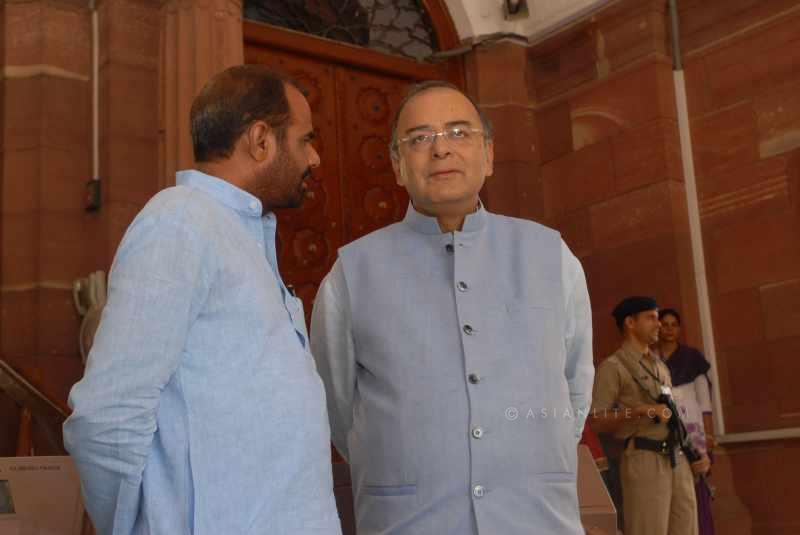 Vatsal Srivastava in his weekly column Currency Corner analysing the Indian equity market. Global cues to guide Indian equities over the next week

Prior to the finance minister’s budget speech, Currency Corner had argued that Indian equities are all set for a short-term correction irrespective of what Arun Jaitley delivers on the reform front. Markets have had an almost parabolic up move since April and profit booking around these price levels was inevitable. Markets still look overbought as current valuations are pricing in a substantial earnings upgrade in coming quarters. However, one can look at adding quality mid-cap and small-cap names as well as PSU banks which have witnessed a deep correction due to their higher betas in the last week while the Nifty has just fallen only a couple of percentage points.
During last week’s sell off, global crude prices corrected about $5-$6 as the Libyan prime minister declared that the “oil crisis was over”. So that’s one positive for Indian markets which should provide support if there is further downside pressure.  But the major action is out of US and Europe next week and Indian markets will be closely watching out for macro developments on this front. Central bankers around the world expressed concerns about low volatility and if there is an opportunity for bigger moves in currencies, it could occur in the coming week. The recent decline in Treasury yields put pressure on the dollar but given the lack of market moving US data, the decline has been relatively shallow according to BK Asset Management.

Firstly, market participants would be closely watching Janet Yellen’s semi-annual testimony on the economy and monetary policy. The macro call on US yields, the dollar and the euro/dollar exchange rate has been one of the most frustrating directional calls of this year. On the back of US Federal Reserve tapering its QE programme, one would have expected US yields to rise towards 3 percent, the dollar index to push higher and the euro to correct towards the 1.3 level against the dollar. But the Federal Reserve’s reluctance to even remotely talk about rate hikes and keeping a dovish stance has led to the US 10 year yields stuck near 2.5 percent, the dollar index hovering around 80 and the euro trading above 1.35 to the dollar even on the back of ECB president saying that QE is on the cards.

Based on the FOMC minutes in June, the Federal Reserve was optimistic about the outlook for the US economy (they plan to end QE by October assuming the current magnitude of tapering is maintained) but refuses to provide a clear timing on tightening. Bond, equity and foreign exchange traders want to know when the Fed will start raising interest rates so rest assured, members of Congress will pepper her with questions about tightening according to currency guru Kathy Lien. Janet Yellen has maintained that the labour market recovery could be stronger and the Fed will not turn hawkish until she is satisfied with the wage data. It is in the central bank’s interest to give the market an opportunity to react to the end of QE before signaling a plan to raise rates. If bond yields spike after QE ends (much like in 1994 – a situation which the Fed intends to avoid) with a sell-off in equities, Yellen will probably have to delay the first rate hike which is currently being priced in for mid-2015. It is in the central bank’s interest to clearly draw a roadmap, and more importantly communicate that with the financial markets to avoid volatile moves across asset classes as we approach the end of the QE taper. US retail sales are also expected to rebound, lending support to the dollar. The earnings season also kicks off with heavyweights such as JP Morgan, Goldman Sachs, Google and General Electric reporting earnings.

Without any domestic trigger for Indian equities, all eyes will be on the Fed and the impact on US yields and the dollar.