“India has a major challenge of transitioning its young workforce to the fourth industrial revolution called AI after the eras of agriculture, manufacturing and services,” Gopalakrishnan told IANS in an interview here.

Gopalakrishnan, 63, well-known as ‘Kris’, is one of the seven co-founders of the iconic IT firm, who became its chief executive after fellow co-founder Nandan Nilekani quit in mid-2009 to set up the Unique Identification Authority of India (UIDAI) for issuing Aadhaar cards to over a billion citizens.

“As the large workforce is engaged in diverse occupations such as agriculture, manufacturing and white-collar jobs in the services sector, it needs to be re-skilled to sustain the jobs, as AI will replace traditional jobs,” said Gopalakrishnan.

As a geek, Gopalakrishnan allayed unknown fears of AI, terming it as a transition none can avoid but adopt in due course.

“AI is a transition that is bound to happen, whether we like it or not. We should rather think of preparing the workforce for it by reskilling it. We have to brace for skilled jobs, as many conventional jobs will be lost though many more will be created in allied areas,” he pointed out.

Golalakrishnan, however, refused to answer any questions on Infosys’ developments in the field of AI, even as the software giant has been working on the technology through its platforms like Nia over the past few years. 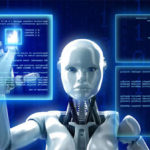 Though use of robots in the automobile industry led to the loss of painting jobs in assembly lines of car plants, Gopalakrishnan said on the flip side, they saved the blue-collar workforce from the harmful exposure to chemical paints.

Hawking (1942-2018), had termed the emergence of AI as the worst event in the history of civilisation and urged its propounders to find ways to control its development.

Participating in a web summit technology conference at Lisbon in Portugal on November 6, 2017, Hawking said computers could, in theory, exceed human intelligence (HI).

“Unless we learn how to prepare for, and avoid, the potential risks, AI could be the worst event in the history of our civilisation. It brings dangers, like powerful autonomous weapons, or new ways for the few to oppress the many. It could bring great disruption to our economy,” Hawking asserted.

Echoing Hawking, Telsa co-founder Musk charged that AI was more dangerous than nuclear warheads and called for a regulatory authority to oversee its development as super intelligence.

“The biggest issue I see with so-called AI experts is they think they know more than they do, and they think they are smarter than they actually are,” said Musk at a tech conference at Austin in Texas on March 12, as reported in the US media.

Countering the likes of Hawking and Musk, Gopalakrishnan said there was no simple solution with disruptive technologies but to adopt them to sustain and thrive.

“If we don’t prepare as a country to re-skill our people for an AI-led future, there will be social unrest because their jobs will become redundant,” he reiterated.

Unfazed by partial opposition to AI, Gopalakrishnan was passionate about AI for the immense benefits he saw in it.

“As in every technology, risks are inherent even in AI, though I see a bright future in its adoption. Through AI in key areas like healthcare, we can reduce the cost of technology to improve the quality of life,” he affirmed.

Key sectors such as health, education and transportation will be impacted by AI, with machine intelligence reducing labour and redundant activities.

“AI is reaching the critical stage of consumerisation, becoming a technology for our daily use. It can create opportunities to spur growth,” Gopalakrishnan claimed.

In this context, Gopalakrishnan, chairman of India Inc apex body CII’s innovation cell, clarified that the industry, academia and the government have to share the responsibility of getting the workforce prepared for AI-led jobs.

“The preparedness should begin with training undergraduate students on AI by including it in their courses,” he added.

In a technology-driven world, Gopalakrishnan said India’s policies have to strike a balance between protecting an individual’s privacy and promoting the tech medium.