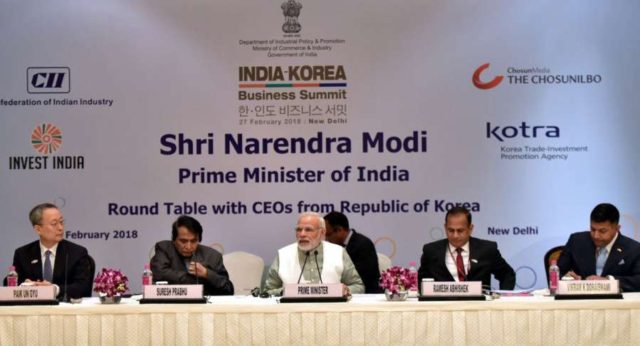 Modi also said that he wondered how South Korea, a country of the size of Gujarat, could make such economic progress.

“It is heartening to note that the bilateral trade crossed $20 billion for the first time last year in six years,” the Prime Minister said while addressing the India-Korea Business Summit here.

He also said that he “admires the spirit of entrepreneurship of the Korean people”.

“I admire the way in which they have created and sustained their global brands, from information technology and electronics to automobile and steel, Korea has given exemplary products to the world.”

He also said that South Korean companies are appreciated for their innovation and strong manufacturing capability.

The Prime Minister also said that India has all three factors of the economy.

“If you see around the globe, there are very few countries where you have three important factors of economy together. They are – Democracy, Demography and Demand. In India, we have all the three together,” he said.

Modi added that the relations between India and South Korea dates back centuries.

“We are also bound by our Buddhist traditions. Nobel laureate Rabindranath Tagore composed poem ‘Lamp of the East’ in 1929 about Korea’s glorious past and its bright future.

“It is also conicendence that India and Korea both celebrate their independence day on August 15. From Princess to Poetry and from Buddha to Bollywood; India and Korea have so much in common,” the Prime Minister added.