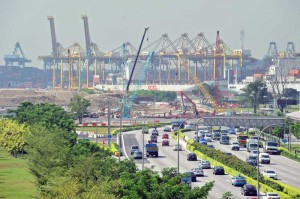 Exports have posted a healthy double digit growth for the second consecutive month. The country’s merchandise exports jumped by 12.4 percent to $27.99 billion in May. In April, exports increased by 5.26 percent to $25.63 billion.

Cumulative value of exports for the period April-June this year stood at $80.11 billion, up 9.31 percent from $73.28 billion recorded during the same period previous year.

Trade deficit has widened largely due to a sharp jump in gold imports. Gold imports surged to $3.12 billion in June 2014 from $1.88 billion in the same month last year, registering a year-on-year growth of 65.13 percent.

Cumulative value of imports for the April-June period this year stood at $113.19 billion, as compared to $121.61 billion recorded in the same period last year, posting a decline of 6.92 percent.

The trade deficit for the first three months of the current fiscal declined to $33.08 billion as compared to $48.32 billion recorded in the same period last fiscal.