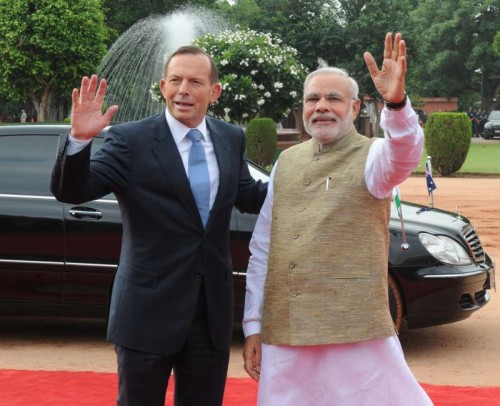 Evan A. Feigenbaum is Vice Chairman of the Paulson Institute at the University of Chicago and Nonresident Senior Associate in the Asia Program at the Carnegie Endowment for International Peace. He is a former US Deputy Assistant Secretary of State for South Asia and Central Asia.

In Asia, it’s summit season again – the time of year when leaders from the Eurasian steppes to the Pacific Ocean gather at an alphabet soup of multilateral meetings. India has joined some of these groups – for instance, the East Asia Summit. It is about to join another – the Shanghai Cooperation Organization (SCO).

And at the invitation of Chinese President Xi Jinping, its host, Prime Minister Narendra Modi will have the opportunity to attend a group that has long excluded India – the Asia-Pacific Economic Cooperation (APEC) forum. Meanwhile, India is weighing whether to join or revive a host of informal combinations, including trilaterals and quadrilaterals involving the US, Japan, Australia, China, and others.

But what has all this multilateralism wrought? Is Asia actually secure because it boasts large security groupings? Is it more prosperous for having large economic and financial groupings?

For two decades, inventing multilateral forums has rivalled badminton as the region’s leading indoor sport. But as India weighs how, in External Affairs Minister Sushma Swaraj’s words, to “Act, not just look, East”, it would do well to reflect on some experiences from these groups in recent years.

For one, Asia’s large and formal groups have too many players, and often the wrong ones. It is, for example, inexplicable that APEC, which purports to be Asia’s leading economic forum, includes Papua New Guinea and Peru but not India, whose economy dwarfs nearly all of the group’s members in size and significance.

But more than the question of membership, APEC is large and unwieldy. And so like many of Asia’s regional groupings, it mismatches countries of widely varying sizes, endowments, and capabilities.

When groups grow too large, they tend to privilege form, not function. Senior officials meet, and that is a good thing. But when ritual predominates, groups of countries rarely find the means to take serious collective action in the face of urgent problems.

That is precisely what has happened through most of Asia’s recent crises. In the tsunami of 2004, the East Timor crisis of 2006, the avian influenza epidemic of 2007, the Myanmar cyclone of 2008, and an array of other natural disasters and crises, regional institutions were overshadowed by ad hoc international responses, frequently led by the United States.

It’s easy to understand why and how so many Asian institutions have taken form, not function, as their touchstone. Take the Association of Southeast Asian Nations. ASEAN’s members have historically lacked mutual trust for many reasons. So putting form first was not an alternative to putting some useful function first, but an important alternative to the member states’ continued near isolation, including from one another. Ritual, frequent meetings and an emphasis on form helped ASEAN countries, particularly the original six, become comfortable with one another and familiar with nearby leaders.

But forty years have passed since ASEAN was founded. And many of the other Asian groups that India has joined – or seeks to join – have already existed for decades.

When that much time has passed, the bar rises to produce functional results.

Just take the Shanghai Cooperation Organization, which India is now set to join alongside Pakistan and Mongolia. Despite boasting the word “cooperation” in its name, the group’s six members have in practice found cooperation enormously difficult and regional rivalries abound.

In Central Asia, independence erected international borders where none had existed. It divided families and communities, and separated water from farmers and fields. In the Soviet period, settling disputes was easy. The disputants could simply look to Moscow to decide by administrative fiat. But independent Central Asian governments, no longer able to rely on Soviet diktat, have been forced to negotiate complex intergovernmental agreements on everything – from crossing a border to sharing water. And in most cases, they have failed utterly to reach effective, much less durable, agreements.

The most enduring lesson, then, is that habits of cooperation emerge from mutual interests, shared objectives and joint efforts to confront real problems. And that argues for a serious effort as India aims to “act East” not just look East, to emphasize informal to functional problems – and bring India’s strengths into the larger groupings in ways that directly target specific policy challenges.

In several areas, from maritime security to financial stability, India brings tangible capability and experience to the table. So rather than simply seeking to join this or that group and then rearrange the deck chairs, “acting East” should mean putting a premium on flexibility, action and informality in India’s Asian partnerships.

Here’s an example: the Tsunami Core Group, through which the United States, India, Japan and Australia provided quick relief around the Indian Ocean for nine days in 2004 and 2005. As former US Undersecretary of State Marc Grossman once put it, the Core Group “was an organization that never met in one of diplomacy’s storied cities, never issued a communiqué, never created a secretariat and took as one of its successes its own demise”.

The group, with Indian participation, was effective precisely because it was ad hoc. And that provides a model: India can make unique contributions, especially in informal settings, on issues where it marries interest with capability.

Nuclear power? Few Asian countries are major civil nuclear players. So from safety to reactor design, India is in a unique club.

The maritime commons? India marries interest, a capable navy and strong relationships on both sides of the Malacca Strait.

Environmental security? India is a major energy user and carbon emitter. Whatever may or may not happen in global climate talks, ad hoc responses among and with select players, especially in technology development, expands the field of play.

Ultimately, the solution to problems emerges from capability and interest, not abstract geometry. That is an important lesson – for India and all countries – as Asia approaches its season of summits.