London has witnessed the beginning of a new business partnership. Godfather of Arabian  retail sector signed a deal with Patron Saint of global trade – the East India Company at a glittering ceremony held at prestigious Mandarin Hotel in London.

Mr. M.A. Yusuff Ali, Managing Director of Abu-Dhabi based LuLu Group, signed a deal with Mr Sanjiv M Mehta, chairman and MD of the East India Company (EIC) to acquire a 10 per cent stake in the EIC and a 40 per cent stake in its fine foods subsidiary for US$82 million.

East India Company is synonymous British colonialism and global trade. The company launched its operations with a charter from Queen Elizabeth the First in 1600 to pioneer global trade routes and form the footprints of the British Empire and Commonwealth. It was acquired by Mr Sanjiv M Mehta in 2005 and turned into a global luxury brand. 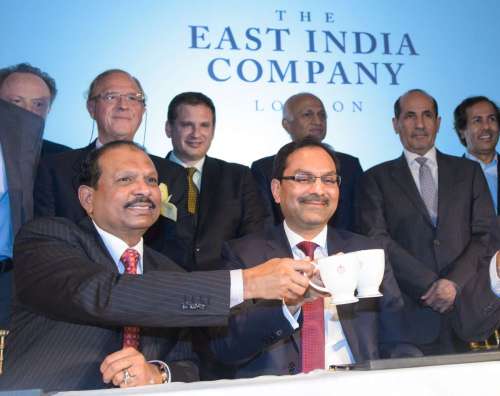 The East India Company Fine Foods has developed a diverse range of over 350 fine luxury foods stretching from Tea, Chocolate, Coffee, Jams, Mustard and Biscuits, as well as a range of corporate and occasion based gift boxes, hampers and trunks. The London-based EIC  is planning to enter the furniture and home decor, publishing, jewellery and real estate sectors.

The Lulu Group currently has 111 supermarkets and hypermarkets across the Gulf, Yemen, Egypt and India.  The company recently announced aggressive expansion in Malaysia with plans to open six new halal-only hypermarkets with an investment of $200 million. The supermarket chain has also outlined plans to enter new markets such as Iraq, Indonesia, Algeria, Morocco and Libya.

Mr Yusuff Ali, a recipient of Padmashree, one of India’s highest civilian orders, said the deal will help Llulu Group to embark on new avenues of global luxury brands.

“We are excited to play an important part in the journey of one of the truly iconic British brand stories,” said Mr Yusuff Ali. “The East India Company has resonance with customers throughout Asia, The Middle East, and America; the Company is ready for the next stage of international expansion. We see a tremendous opportunity in supporting The East India Company’s continued development into a truly global, luxury brand.”

Lulu Group has achieved significant growth in the recent years and diversified into various business lines. Besides shopping malls, the Lulu Group is involved in hospitality sector; food processing and export, IT education and training and import and distribution.

With an annual turnover of US$ 5.4 billion, the Group has a vast organisational structure of over 31,440 staffs in 31 countries. Lulu Group of companies is one of the leading importers, wholesalers and retailers of all kinds of consumer items with a world-wide business network and having 111 retail outlets with a chain of Shopping Malls, Lulu Hypermarkets, Supermarkets and Department stores in the Middle East and sourcing offices in Far-east and Africa. Lulu Group has been ranked 3rd in the ‘Forbes Top 100 Companies’ making an impact in the Arab World. Lulu is the only Indian company to be featured in the top 10.

The Lulu Group has also taken a strategic minority stake in The East India Company holding company, which, in addition to its Fine Foods business, will be launching additional business verticals including restaurants, hospitality, real estate & jewellery.

Commenting on the new strategic partnership, Sanjiv Mehta, Chairman of The East India Company said: “The East India Company traded across the world, establishing the footprints of The British Empire and Commonwealth. Quintessentially British, its fortunes were the fortunes of the country. Our growth has accelerated significantly, reflecting the broader increased confidence in the British economy, and has encouraged us to bring forward our expansion plans.

“To facilitate growth internationally, while remaining true to the core values and pioneering spirit of The East India Company brand, we found a strategic partner in Lulu Group, one with a tremendous track record of over forty years in the food industry, and with strength in both the Middle East and Asia. Their eco-system brings tremendous synergy and significant momentum to our business.”