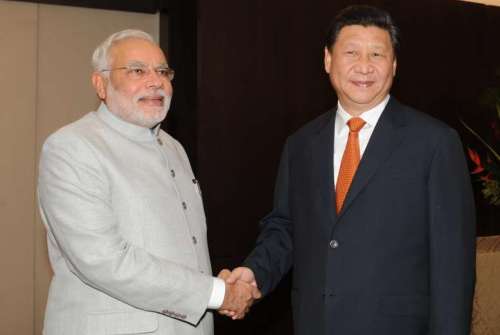 Ahead of Chinese President Xi Jinping’s visit, Prime Minister Narendra Modi Tuesday described the India-China ties as moving ahead from “Inch (India and China) towards Miles (Millennium of Exceptional Synergy)”.

In a conversation with Chinese journalists based in New Delhi, Modi said: “India and China are bound by history, connected by culture, and inspired by rich traditions. Together they can create a bright future for the entire mankind.”

He summarized the possibilities of the bilateral ties moving ahead as “Inch (India and China) towards Miles (Millennium of Exceptional Synergy).”

He said that every inch we cover can rewrite history of humanity and every mile we cross will go a long way in making this planet a better place, according to an official statement.

He hoped that together India and China cover several miles. Several miles that take not only the two nations forward but also all of Asia and humankind towards the path of progress and harmony, the statement said.

In response to a question on how he foresees India and China relations developing, the prime minister explained that “our relations go beyond plain arithmetic. They have a unique chemistry that can make for a defining moment”.

Elaborating on the nature of the relationship, he said: “The arithmetic and chemistry of our relations convince me that together we can script history and create a better tomorrow for all of mankind”.

According to Chinese news agency Xinhua, Modi said that he is looking forward to welcoming Chinese President Xi Jinping in his home state Gujarat.

Modi told Chinese journalists that he is glad to hold the first meeting with the Chinese president in Gujarat during Xi’s state visit to India, as the state has a long relationship with China in culture and civilization.

“It’s a great thing for us to welcome Xi in Gujarat. It is good that Xi has included Gujarat in his itinerary of his Indian visit,” said Modi. “I am going to Ahmedabad today for the event.”

He said Gujarat had become home of many people who have traveled to China while also having hosted many Chinese visitors in the past, including seventh century Chinese Buddhist pilgrim Xuan Zang.

“The oldest visitor from China (Xuan Zang) stayed in the village I came from,” he said, adding that these historical, cultural and civilizational ties are extremely important for China-India relations.

Modi said the two countries are bonded by history and connected by culture.

“Both countries are rich in culture. This makes our traditional relations special and unique,” he said.

Modi said that India and China have about 35 percent of the world population and 300 years ago, the two countries contributed to half of the world GDP.

Modi said in Hindi, the word “sugar” is “Chini” meaning China, because it is the Chinese who first brought the technology of sugar refinery and manufacturing to India.

“The word ‘sugar’ in Hindi shows deep ties of the two countries,” he said.

Modi also revealed that he now has a new idea on boosting bilateral cooperation, which he will introduce to Xi.

“It is called ‘Inch towards Miles’, or abbreviation of ‘India-China towards Millennium Synergy’,” Xinhua quoted the prime minister as saying.