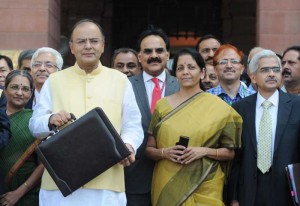 During a 128-minute speech in the Lok Sabha by Finance Minister Arun Jaitley, with a five-minute break allowed by Speaker Sumitra Mahajan upon his request due to momentary discomfort, a host of other proposals, both welfare schemes and reformist policy measures, were also unveiled that were aimed at a wide range of stakeholders — from the girl child to senior citizens and overseas investors to the defence forces.

At the same time, he acccepted as a challenge — given the state of the flagging economy and rising prices — the task to cut fiscal deficit, which indicates the extent to which the government overspends, to 4.1 percent of GDP for this fiscal, and further to 3.6 percent and 3 percent over the next two years.

As high expectations ran high from the first budget of the Modi government, after having been voted to power with a landslide victory mainly on promises of “happy days” for India’s 1.2 billion people, Jaitley also made it clear that putting the Indian economy back on rails remained a daunting task needing more than one dose of corrective action.

“The steps that I will announce in this budget are only the beginning of a journey towards a sustained growth of 7-8 percent or above within the next 3-4 years along with macro-economic stabilisation,” the finance minister said.

“Therefore, it would not be wise to expect everything that can be done or must be done to be in the first budget presented within 45 days of the formation of this government,” he added, setting the agenda for his speech.

“We are going in the right direction to overcome challenges faced in the last decade,” echoed Modi while congratulating Jaitley for the budget in which he provided a “new ray of hope for the poor and downtrodden sections of society.”

It was also in line with the “government’s vision to create a skilled and digital India,” the prime minister said.

One of the most appealing proposals for the average tax payer was the hike in the exemption limit for individuals below 60 years to Rs.250,000, and Rs.300,000 for senior citizens. Deductions under various heads such as investments in insurance, pension and house rent were also proposed to be raised by Rs.50,000 to Rs.150,000. Interest on housing loans will also get a higher exemption. This apart, the duty-free baggage allowance for Indians returning from abroad is also sought to be raised to Rs.45,000 from Rs.35,000.

Farmers will also stand to gain largely with Jaitley’s proposal for an integrated national market for agro-produce that will enable them to sell their crops directly to consumers and earn better prices. The subsidies to them, notably for soil nutrients, have also been enhanced.

For industry, he assured that the pan-India goods and services tax will be introduced by the year-end and a fresh view taken on the direct tax code. Retrospective tax, which creates liabilities not planned for and has been a matter of much concern for both domestic and overseas investors, will not be imposed at random. Customs duties and excise rates were also rationalised for a host of sectors.

He also sought to remove the perception of policy inaction and a freeze on economic reforms by hiking foreign equity in insurance and defence equipment to 49 percent from 26 percent, but left for later the much-promised overhaul of the subsidy regime after constituting an expenditure management commission and getting its recommendations.

In his speech, Jaitley also touched upon areas which few finance ministers in the past have done. Such proposals included new schemes for conservation of sacred rivers, a sports university in Manipur, welfare fund for migrants from Kashmir, conservation of the Himalayas, support for organic farming and a 24X7 channel for northeast and protecting the heritage of the Andaman and Nicobar islands.

He also promised at least four institutions modelled on the premier All India Institute for Medical Sciences and Indian Institutes of Management, and said the union government will look positively at every similar proposal forwarded by states.

As Jaitley was unveiling his proposals, the stock markets swung both ways with a key index gaining more than 300 points at one point, then falling by some 250 points, before closing with an overall loss of around 70 points or 0.25 percent.

Industry, nevertheless, welcomed the proposals and said it laid down the requisite ground for a medium-term course correction to revive the Indian economy.

The Confederation of Indian Industry (CII) complimented the finance minister “on a pragmatic and extensive Budget that lays out a medium term vision for the economy and meets industry expectations on growth and employment creation.”

The Federation of Indian Chambers of Commerce and Industry (FICCI) also reacted in a similar vein and said the budget laid the ground for rejuvenating the economy. “There has been a mix of both short-term and long-term measures, geared towards boosting the confidence of all key constituents.”