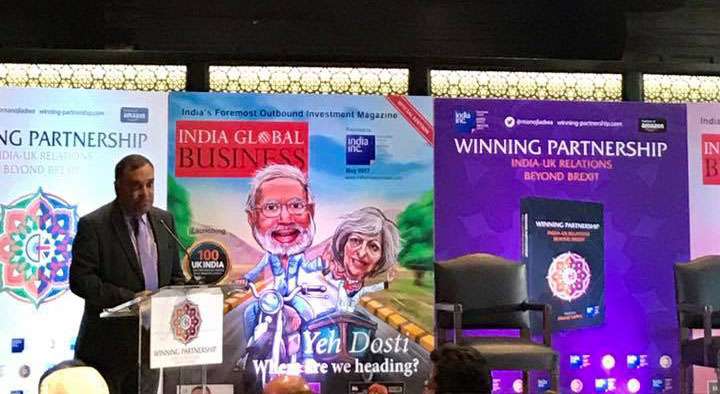 ‘Winning Partnership: India UK Relations beyond Brexit’, a book that has been edited by Mr. Manoj Ladwa, who is the CEO of India Inc and the editor of the India Investment Journal and India Business Group, was launched in London as High Commisioner Mr. Y.K. Sinha attended as Chief Guest….reports Asian Lite News

The book has been edited by Mr. Manoj Ladwa, who is the CEO of India Inc and the editor of the India Investment Journal and India Business Group. He said that the idea behind the book was to put together a body of work that recognises and celebrates the relationship between the world’s oldest democracy and the world’s largest, particularly so in these difficult times, when UK attempts to move ahead with the reality of Brexit now established. The chapters by some of the most eminent names in various fields- education, politics, business and entrepreneurship, media, culture, community work, aim at a real stocktaking, tampered with a ‘considered optimism’ in the future of this bilateral relationship.

In his remarks, High Commissioner Sinha expressed his hope and trust that the partnership between the two counties will continue to remain robust in the times to come. He spoke of the multifaceted relationship that continues to progress in all sectors, but emphasised the importance of reaching a congruence of views on comprehensively confronting terrorism and on core issues of concern to both countries particularly in their neighbourhoods. He pointed out, for instance, that the UK is coming to terms, after a series of unfortunate terrorist events, of the real gravity of the threat of global terrorist networks.

For this winning partnership to be more fulsome, High Commisioner said, UK and India need to work much more to recognise and respect each other’s critical contemporary interests. He expressed confidence that the leaders of the countries, Prime Minister Narendra Modi and UK Prime Minister Theresa May will lead the people and the businesses of the two countries to invest in each other even more strongly. He concluded by emphasising the need for the Indian diaspora to step up to support this historic relationship.