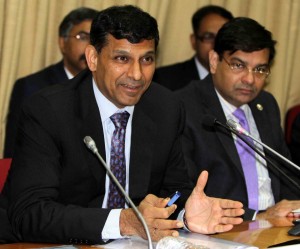 The Reserve Bank (RBI) is without bias either way about raising or cutting interest rates, while further policy will be contingent on relevant data coming in, Governor Raghuram Rajan said Wednesday.

“Our policy stance today is reasonable and we see no reason to alter it today based on the information we have. As data comes in, we will have a better view and will adjust accordingly,” Rajan said at the post-policy conference call with analysts.

“So, I should not presume that we are either biased towards raising rates or cutting rates at this point,” he added.

Observing that the country is currently positioned to reach the central bank’s inflation target of 6 percent by January 2016, Rajan Tuesday decided to keep the lending rate, or the repo rate, unchanged at 8 percent, while retaining the short-term borrowing, or reverse repo rate, at 7 percent and the cash reserve ratio (CRR) at 4 percent.

“We are currently positioned to reach 6 percent by 2016, given where the rate (inflation) is. Our expectation is that we will reach that target. The (future) policy will be data-contingent,” the monetarist-inclined governor said after announcing the policy review Tuesday.

“Given the modelling of inflation, which says the expected level by 2016 is 7 percent, the risks are still to the upside,” Rajan told reporters Tuesday.

RBI had first mentioned the upside risks to the 6 percent inflation target at the August policy review.

With food inflation buffeting retail inflation, Rajan said the country should focus on other aspects like cold storage facilities, improving the logistics and finding newer market places for the produce to reduce the seasonal volatility in prices.

On corporates’ overseas debt, Rajan said there was a need for companies to look at hedging from the financial perspective and hedges should not placed like bets assuming a single direction for the currency to move in.