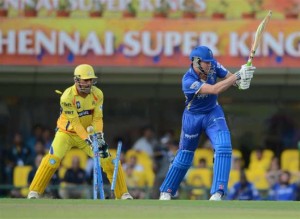 Is there such a state as having too much of a good thing? I think so. The IPL’s 45 day stretch is a perfect case in point. It is like metal fatigue. After a while it develops cracks in the attention span and just becomes a blur. Unless you are a diehard fan of one of the teams you shift into glance viewing mode, like one does with tennis, the beginning and the end and leave the relatively soggier middle parts out.

I also think that in the good ‘not so old’ days of TV coverage they let us watch the cricket in peace and the commentary was more observation and less babble. They had two or three cameras and they occasionally even lost sight of the ball. Which is exactly how it unfolds when you are at the stadium. Now, it is all so technical and slippery clever that it breaks the rhythm of the action.

For one, they keep breaking into the game with cameos from earlier matches and you tend to get confused about whether the soaring six or the catch taken is LIVE or from another game. And they invade the screen so frequently with these fragments that it is downright disruptive.

Then there is the agony of the replays. Twenty flipping times from twenty flipping unnatural angles until you could weep. They showed a batsman’s heel on the crease sixteen times the other day. In fact, if there is a close run out, you shudder with dread because now you will have to suffer the incessant patter and the flat repartee of the commentators as they play their undergrad guessing games replete with shrill gushing. You could go have a shave and a bath and when you get back they’d still be showing the back0-foot on the white line and moaning about it.

Cricket coverage is now drenched with trivia under the pretence of interactive viewing… more like inter-somnolence.

Then some bright spark has decided in his questionable wisdom that TV viewers love stats and compu-graphics and funny little comparisons so we are inundated with a lot of technical rubbish. Now they have even started showing colour CAT scans of the area where the balls hit the pitch like it was a power point presentation at a medical convention.

None of these innovations add to the pleasure of watching the game so just let us be. Not the silly cameras on the umpires’ heads, not the absurd competitions about who is most loved, most likely to be willing or whatever and those incessant percentage presentations that keep appearing onscreen, all of these and more messing up a simple match. Stop already.