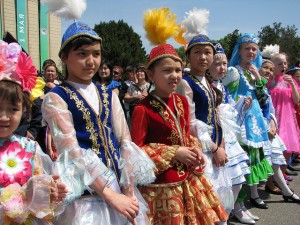 Central Asia is more confident in their independence – moving beyond nation building to economic development.

A new great game is emerging in Central Asia. As the world shifts from bipolar to multipolar system – focus of the emerging superpowers and the developing economies has started to shift to the region. The countries of Central Asia are more confident in their independence – moving beyond nation building to economic development.

Once considered as the backwater during the Soviet era, the region in past two decades has successfully managed to shun that image. The region has gained the capability to become the vital economic corridor connecting the Europe to China and South Asia via Iran and Afghanistan.

From Kazakhstan to Iran to India to East Asia – exciting energy developments are taking place. There are many implications for the entire regional geography and the adjacent economies. The energy trade emanating from this region has the potential to develop stable and market driven economies, provide energy security to emerging superpowers and ignite economic development in countries like Iran, Afghanistan and Pakistan.

Kazakhstan, which did not exist as an independent country even a generation ago is an example of the speed of change and direction of development. It rose out of the ashes of the broken Soviet Union and is already among the 50 biggest global economies with dramatic improvements in living standards for its citizens.

Kazakhstan is the focus of many Fortune 500 companies seeking new business development and market penetration in emerging economies. It could also be a centrifugal force in order to keep the Central Asian region together and with its very rich oil reserves, the country has the capacity to satiate the energy needs of the developing and the Western world.

Nearly after one thousand years the Silk Road began to disappear – Kazakhstan is once again looking to pave a way for modern and a high-speed version of the historic route to link China with Europe. Just as various caravans transformed the world then – a new $7 bn Silk Road project will stimulate economic growth that would have repercussions the world over. The twisting and threatening routes where a traveller would perceive bleakness – Kazahs see shining opportunity.

It would not be wrong to say that Central Asia is emerging as the pivot of Asia.

The country’s assets and opportunities are so significant and complementary as to suggest that under right policies and able leadership – it would be the right contender for accelerating economic growth.

China is already benefiting from the region’s growth. There are lesions for India to be learnt. In a candid conversation with G Parthasarthy – a former Indian diplomat said that, under new Prime Minister Narendra Modi – New Delhi will have to look beyond its immediate neighbours to neighbourhood in Central Asia. But gap between intent and capability colours India’s plans for Central Asia. The geographical distance has hampered the progress in economic development. No routes exist between India and Central Asia. If built – it will have to pass through Afghanistan and Pakistan. India has tremendous capabilities, but the investors are hampered by unstable Afghanistan and Pakistan.

With the withdrawal of international forces, economic prosperity and opportunity will be critical to building a stable Afghanistan. The development of regional infrastructure can help integrate and open up the country to Asia’s growth.

The Caspian region contains about 4% of the world’s known oil reserves and even greater amount of gas reserves. Kazakhstan and Azerbaijan are already benefiting from these sources. The benefits – if shared with Afghanistan and Pakistan – it could help provide economic security region and tame violence.

The new great game for economic dominance and military influence will continue in Central Asia. The military outcome is unclear, but economic integration will herald a new economic century for Central Asia. It could prove to be the centre of super-continent whose strategic importance is many fold. The interconnectedness of Central Asia and especially Kazakhstan is unlikely to offer staging ground to countries like China and Russia for an invasion.

Central Asia – especially Kazakhstan could be the conduit of peace and stability in the region as its natural resources could satiate the needs of the region and countries far beyond.