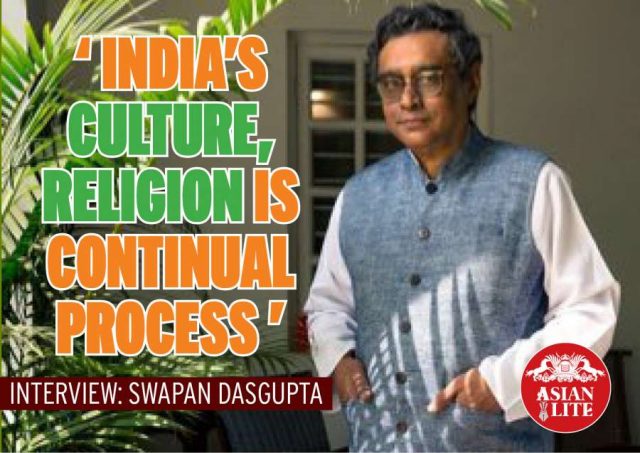 One cannot have an India that is completely sanitised of its culture, which itself is linked to religion, as India has a certain existence predating the Republic and the Indian state, and Bharat Mata is part of that continual, says Rajya Sabha member Swapan Dasgupta, considered a key member of the think-tank in the Centre’s ruling right wing BJP.

“I don’t believe that you can have an India which is completely sanitised of its culture, and made into a legal document. India, to quote V.D. Savarkar, is not a treaty state. India has a certain existence which predates the Indian Republic, and predates the Indian state.

“And if you acknowledge that, Bharat Mata is a part of that continual,” Dasgupta said, while participating in a session on Wednesday evening at the Tata Steel Kolkata Literary Meet here.

According to the journalist-turned-politician, the idea of Bharat Mata was actually made to personify India, though the construction of Bharat Mata is relatively modern.

“The geography of India and the pilgrimage centres are more or less contiguous. Now, all of this, the inheritance we have, is located somewhere in our culture, which you choose to call religion, because the separation between the two is rather thin.

“What is culture and what is religion in India, the separation is rather thin,” said Dasgupta during the session, which centred round his book “Awakening Bharat Mata: The Political Beliefs of the Indian Right”.

He recalled there were certain objections against the two in the 1920s, or slightly before that, but the opposition ceased after 1947 when India became independent.

Dasgupta, however, called the word “right” to delineate the political thinking of conservative political parties as a “misnomer” and said he preferred the term “conservative” to describe himself.

“But the problem of using the term conservative in the Indian context is it has no equivalent in any of the Indian languages. To quote (former British premier Benjamin) Disraeli, the Conservative Party is nationalistic or nothing.

According to Dasgupta, a large proportion of the iconography of the tradition espoused by the Indian Right dates back to the later part of the 19th century “or perhaps, to the early part of the 20th century,” although one can find strands which go earlier.

“What is unique about this is most of these strands, a large proportion of it emanated from Bengal,” he said.

The idea of Bharat Mata can actually be located to the 1870s when Bankim Chandra Chatterjee wrote his song Vande Mataram,

“And that was probably the first time that he visualised Bharatbarsha, which has been an earlier concept, and made it into motherland, and visualised it as Durga… But when Bankim wrote Vande Mataram, and added it as a subsequent section to his novel Anandamath, it did not make waves the moment it came out.

“It was really (revolutionary leader) Aurobindo Ghosh who popularised it, who decided that it epitomises the entire spirit of nationalism in this country. And it was Aurobindo’s translation of Vande Mataram which popularised it. And the concept of Bharat Mata which we know today, really emanates from that,” he said.

Dasgupta recalled the role played by Swami Vivekananda, but said it was “actually the contribution of Vivekananda’s disciple Sister Nivedita, who actually put a certain gloss on this idea called Hindu nationalism”.

Hinduism, as Nivedita imagined, has to be reinvented, and has to be taken out of its passivity. “She proves to be too radical for her fellow sanyasis to digest. And so she is banished as a sort of ultra-radical in the sphere,” he said.

Refering to the national movement against colonial rule under Mahatma Gandhi, Dasgupta said that while the idiom and the imagery used by him were quite different, a look at how the nationalist mobilisation was organised in the states or localities, would show that “the use of Bharat Mata was recurring…it was everywhere.”

“This was the basic problem which the Nehruvian Congress had to counter. Congress was mobilised in a particular way in the localities, in the districts, using the imagery, and there was Nehru using a very, very different form of it.

“That mismatch between the two…people ask why didn’t the Nehruvian project succeed entirely? Because that project did not permeate to the ground, it went against ordinary sensibilities on the ground.

He said the split in the Congress in 1969, only formalised the mismatch.