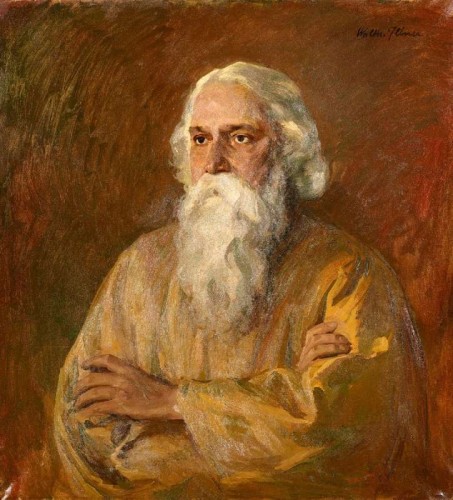 Nobel laureate poet Rabindranath Tagore’s long battle with depression and loneliness can inspire people suffering from depressive illnesses to speak out and engage their near and dear ones to aid them in tackling the issue, a leading psychiatrist said.

A prolific author and composer, Tagore witnessed deaths of family members, including that of his mother as a child and two of his five children as an adult. These experiences deeply impacted his psyche. As did the criticism for the Noble Prize for Literature in 1913. His constant longing for companionship also manifested in bouts of depression, said Hiranmay Saha.
However, his acknowledgement of his mental condition helped him deal with it, said Saha, who has authored a book chronicling the bard’s fight with depression.
Christened ‘Asim Manasloke Ekaki Ek Kobi’ (Lone poet in ocean of humanity), the hardcover book in Bengali launched in Kolkata on Saturday, examines how Tagore confronted the problem instead of sweeping it under the carpet and kept churning out great literature, music and paintings till his death.
“Tagore’s fight with depression is absolutely relevant today. People suffering from depression should speak out and admit to the problem, tell their relatives and friends about it and say ‘please save me’, instead of neglecting it,” Saha told IANS about the book launched by Sharad Rekha Foundation and Oxford Bookstore.
Delving deep, the author shows Tagore, a normal boy suffering from phobia for attending school. It shows how as an adult, in his letters to son Rathindranath in 1914, the legendary philosopher had admitted to contemplating suicide.
“On numerous other occasions he had talked about wanting to die following severe bouts of depression. However, the main thing we see in him is the catharsis. The fact he realised the remedy is within him and the resolve to overcome it… that is the lesson we take away,” Saha explained.
In addition, Saha also shows Tagore’s longing for companionship through his relationships with women.
“His relationship with sister-in-law Kadambari left a lasting impact and her sudden suicide in 1884 a few months after Tagore married Mrinalini Devi.
“His relationship with Mrinalini was also a strange one and it is said she did not occupy much of a space in her husband’s life. Then there were his associations with Lady Ranu Mukherjee and Argentine writer and feminist Victoria Ocampo,” Saha said.
The psychiatrist has also highlighted Tagore’s meeting with psychology’s most famous figure, Austrian neurologist Sigmund Freud in 1925 in Vienna.
“Neither of them was impressed with each other and Tagore was critical of Freudian way and exclaimed ‘why should you accept everything that Freud says’,” said Saha.
The book will be launched in English at the Frankfurt Book Fair in October.