Yum-Sa…The newly opened haute restaurant in the chic East Putney area of London is undoubtedly the talk of the town. They are offering food for the mind, body & soul! In addition to its fancy, innovative fusion Thai cuisine, there’s a tastefully curated art gallery and meditation room. Richa Grover, Asian Lite News, exclusive on two exhibitions at Yum-Sa: 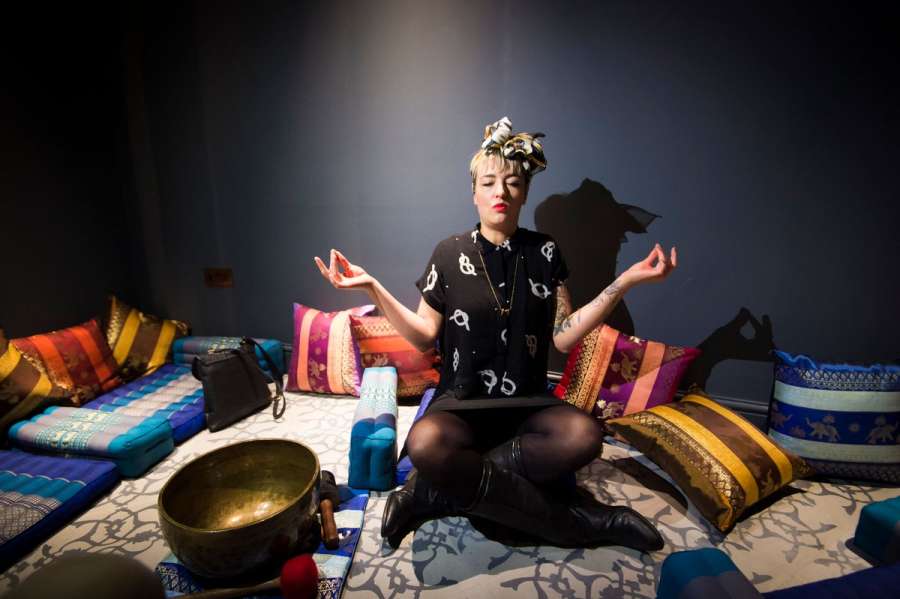 Informed by their years of substantive association in the practice and creation of art, Yum-Sa brings forth this first in a series of planned exhibitions, where in they intend to foster artistic talent from far and wide and become an interactive forum for local artists as well. Placing people at the heart of their story Yum-Sa has a vision and is looking forward to cultivating a hub where people can come and connect, immerse in transformative experiences of art, food, meditation and unwind.

The mythical adventure of the Ramakien and its valiant characters have been the strongest influencer of fusion Thai brand Yum-Sa. The galley proudly presents to London, the works of two artists who are working in very opulent settings like the royal palaces in Bangkok and India and have contributed in recreating that resplendence in the restaurant interiors, with their hand painted murals and the hand crafted striking must see masks.

The works Yum-Sa presents in their maiden foray in London is a creation from the atelier of a master artist Dwarka Singh of Amer, a small suburb near Jaipur, India. Born in 1977, Dwarka lost his parents at an early age and was adopted by an uncle who was an assistant artist at the grand City Palace, Jaipur in India-the hub of the impressive miniature style of paintings.  A completely untaught artist, he took to assisting his uncle to earn and currently still works for the grand palace which he started at as an apprentice at the age of ten.

=He has created this series by working in the style of his forefathers though in a genre not entirely familiar to him yet not wholly alien. Intuitively and painstakingly he has recreated these images from the murals of the Grand Palace in Bangkok. 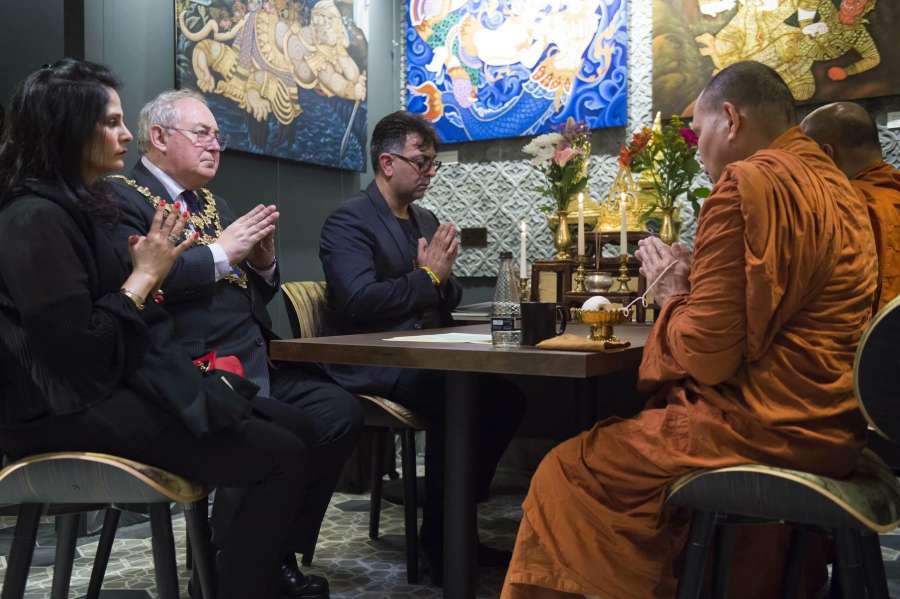 His endeavour reveals that India’s cultural cross pollination over millennia with Thailand is still imbued in the aesthetics of an Indian artist even to this present day. Dwarka has drawn on his innate sensibility and profound skills to make a glorious past come right back a full circle with these magnificent works. The dramatic scenes and resplendent colours are a delight for the senses and bring to life the glories of ancient empires.

This series that are on view at Yum-Sa explore the stories of the Ramakien which is derived from the venerable Indian epic Ramayan. It traces the story of its hero Phra Rama (green face) and his wife Sidda/Sita, the epitome of self-sacrifice, courage and purity, along with his brother Lakshmana (golden) who are banished to the forest by Rama’s step mother as the epic enfolds. It follows the trials and tribulations of this royal family as they go through 14 long years in the forest and ends in their encounter with the evil king of Longka-Tosakan (shown with many arms and faces). Disguised as a hermit he kidnaps Sita. A battle ensues between the forces of good and evil. Rama and Lakshmana are helped by the loyal money king Hanuman (white monkey) and finally Sita is rescued. 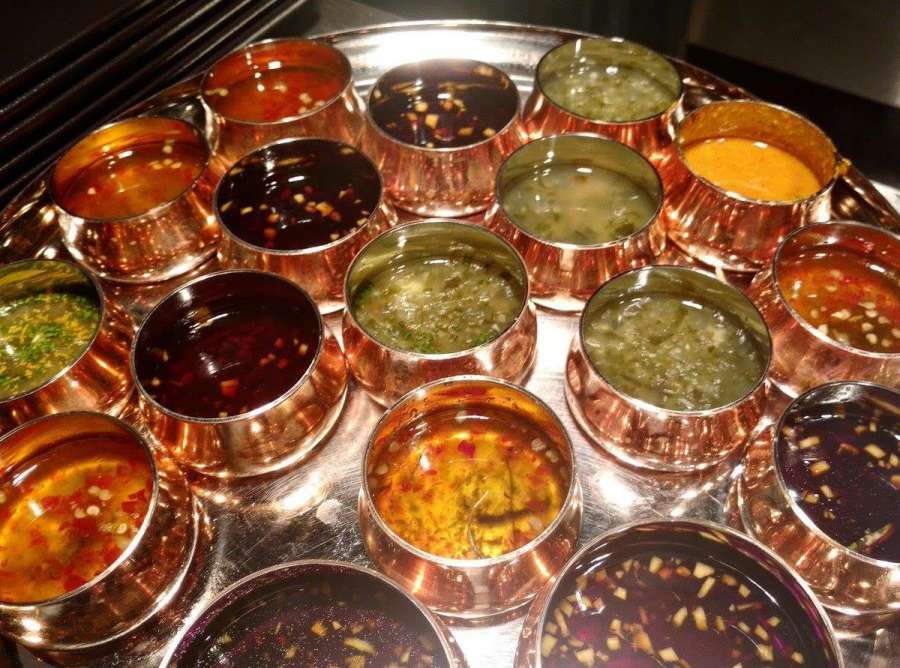 The entire Ramakien is about ideal life principles and moral values and Rama epitomises forbearance and righteous conduct. The centrality of his personality even now continue to pervade the cultural consciousness of India and Thailand. The text is also looked upon as an allegory of man’s spiritual quest through ethical living (symbolised by Rama) for self-realisation and liberation/nirvana (symbolized as Sita) and purification of the coarse passions and imperfections (personified by Tosakan/Ravana) through the pursuit of virtues like loyalty and compassion (represented by the monkey warrior Hanuman).

These myths and stories have a dual role. It enables one to absorb the intellectual aspects of culture as well as delve into understanding the metaphysical nature of the self. According to ancient Thai beliefs,  the reading of Ramakien in 7 days and nights had magical properties. The person doing so could command the heavens, make it rain, make you exceedingly rich or even beget a male heir.

The Ramayan was brought to Thailand and parts of south east Asia by ancient Indian traders and scholars. The earliest recorded reference to it is in the Sukothai period (1238-1438). It is under the first king of the Chakri Dynasty King Rama I (1736 – 1809) that the compilation of the Ramakien took place and it went on to become the national epic of Thailand. He also built the Grand Palace. But it was under King Rama IV’s reign (1825-1850) that 178 murals were painted in the cloisters along the 2 mile perimeter of the complex where they still glisten and glimmer and offer a glimpse into a tantalising and glorious past.

Khun Prateep Rodhpai is one of Thailand’s foremost authorities on the tradition of mask making. With a strict adherence to the rules set in ancient manuscripts Prateep’s reverence to his art form is so passionate that he undergoes a divine ceremony and gains permission from Brahmin priests before picking up the tools of his trade.

Born on December 11, 1954 and apprenticed at the age of 13 to his uncle Sakorn Yang Keawsot, who took him under his wing to run the family run business of making Khon masks for the Royal Palace in Thailand. Khun Prateep still carries on the tradition of the Saphan Mai community located in a quiet street of Soi Prachacheun 18.

These masks are intended for use in staging the Ramakien play. The masks are made in different colours and with different facial expressions that portray the essential characteristics of the protagonist. The making of khon masks not only requires skill but also a deep knowledge of ancient texts to guide the crafts men.

The process of creating a mask begins with structuring of the model with clay. Then the model is pasted with paper tissue by using rice flour paste as an adhesive. Once it is dry, the pasted paper is removed by cutting the model in half and sewing the two separated portions together. Then the blank paper mask is lacquered and painted. No enamel paints can be used as this would produce a shining surface on the mask which would make it unsuitable for stage plays. The mask maker uses only powder colour pigments. To add some special beauty to the mask its forehead frame is decorated with glass or ruby flakes. And finally a special ceremony is conducted to vitalise the khon and ultimately it is enlivened by adding the eyes which creates the dramatic effect you see around you.

For all this history, culture, art, food, insight and more… a trip to Yum-Sa should be a part of your social calendar in London as soon as you can head over to that part of town. Not-to-be-missed and highly recommended!